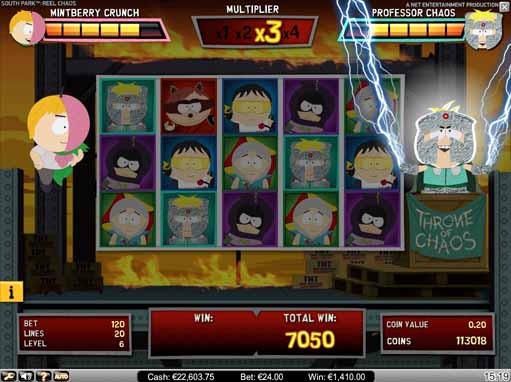 South Park Reel Chaos is the sequel to the original South Park online video slot machine game. It features all the main characters from the TV show and is packed full of bonus features.

Each character has his mini feature in the game. The Cartman’s Stacked Wild Feature is where he goes on a search for General Disarray, the alter ego of Butters. While climbing up and down the reels Cartman’s stacked wilds are created. Kenny’s Multiplier Feature sees him wrestling with Professor Chaos in an effort to protect the town of South Park. This feature comes with a three to five times multiplier.

Stan’s Multiplying Re-spin Feature sees him using the power of his mind to fix the broken reels on the game screen. Re-spins are repeated until players win money. A progressive multiplier is included in this feature starting with 2x multipliers and ending with 10x multipliers.

In Kyle’s Overlay Wilds feature he goes against the evil minions in battle by fighting them off. His efforts give players at least three but no more than four overlay wilds.

The biggest attraction of this game is its Mintberry Crunch Epic Bonus Spins. When players get at least three of the bonus symbols on the reels at once they trigger a battle in which Mintberry Crunch fights all of his enemies in South Park. He must defeat four villains before they defeat him and if players successfully pull this off they win a large cash prize. Each defeated enemy brings with it a multiplier that increases a player’s winnings even more.

These exciting features are a real treat for South Park fans and far surpass the features of the original South Park online slot machine game. Reel Chaos is loved by players from all over the world. Play South Park Reel Chaos for free right here at Slot UK.