Age of the Gods Medusa & Monsters

The Age of the Gods series is one of Playtech’s flagship progressive jackpot series, offering players the chance to win a jackpot that’s often worth millions of pounds. There have been many other games in the series, including Age of the Gods Fate Sisters, however we think that the Medusa & Monsters entry is perhaps the best of them all. You’ll be able to find out more about this slot when you read through the comprehensive Age of the Gods Medusa & Monsters online slot machine review!

This is a slot with six reels and it is also a lot taller than the vast majority of other slots and this really marks it out as different. You’ll also find no fewer than 164 different paylines, which is a rather impressive amount, and this ensures that there’s fun and action on pretty much every spin of the reels. The paylines at this online slot are fixed, therefore meaning you’ll have to have all of them active on every spin. Why would you ever want to reduce the number of paylines though?

But how much cash can you bet per spin at this slot? Well, the minimum bet is £0.50, therefore meaning it might not be the best slot for those looking to play at low stakes. The maximum bet is £100, which should appeal to higher stakes players. You should remember that those betting higher amounts will have a better chance of winning one of the progressive jackpots, so it pays to bet as much as you can afford to. Don’t bet more than you can afford to lose though.

When it comes to the prizes, the top prize at this slot is progressive. This means that it keeps on rising as more people play the game. You can win the progressive prizes via a random game, which is described in more detail later in this review. When it comes to the non-progressive prizes, the highest paying symbol is the mermaid – getting five across a payline will lead to you winning an amount worth 150x your bet. All symbols can come stacked on the reels though, therefore meaning that the maximum prize is actually worth much more than 150x your bet.

There are a couple of good bonus features to mention at this online slot, which is always a good thing. The first to mention though is the wild symbol, and this is represented by Medusa herself. Whenever this symbol lands on the reels, it will expand to cover the entire reel, therefore making it very useful. The wild symbol can substitute or most other symbols, meaning it can help you to make some nice winning combinations.

The other bonus feature to mention is the free spins, and these start when you manage to get three scatter symbols anywhere on the reels – you can see what this scatter symbol looks like by looking at the paytable. When this happens, you’ll need to select a shield, and this will reveal a symbol. Whenever this symbol lands on the reels during the free spins, Medusa will petrify it. The Medusa symbol will start on reel six and will move one reel to the left after every free spin. When she lands on a symbol featuring a petrified symbol, the petrified symbol will be unlocked. The free spins end when Medusa makes it to the first reel.

That’s all when it comes to the bonuses at Age of the Gods Medusa & Monsters – there aren’t loads, but this is okay, as it allows the base game to shine. If you want a game with more bonus features, you’ll find plenty of them reviewed elsewhere on this site.

Age of the Gods Medusa & Monsters is a really good online slot machine from Playtech, and is certainly a great addition to the Age of the Gods series. The bonus features are fun, and you can also win some decent prizes, so what more could you possibly ask for? If you want to find out why this slot is so good, why not play it for yourself? You’ll find that it’s offered at the majority of Playtech online casino sites. 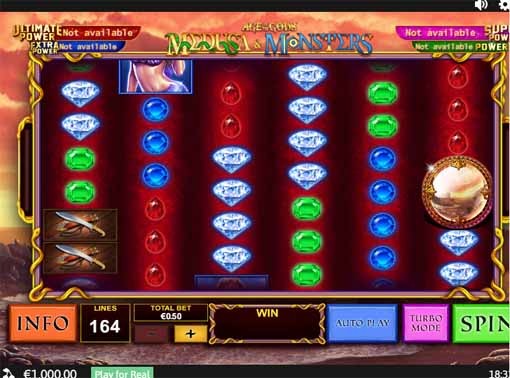 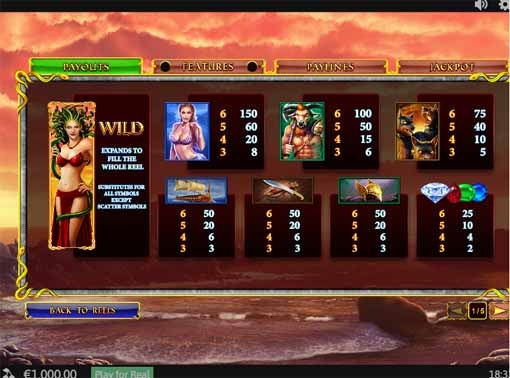