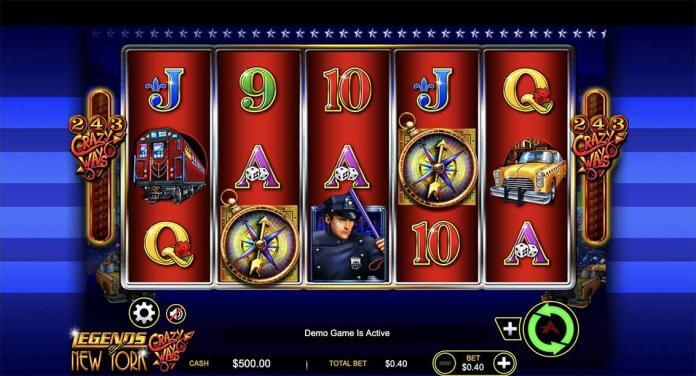 Players who are seeking a taste of the Big Apple should be sure to try the Legends of New York slot machine. Available at both land based and online casinos, the game epitomizes NYC during the 1930s. Its 3D graphics bring the city alive.

Hidden behind the reels of this game is a New York City street at night. Players will see the same yellow taxi in the background that they see on the reels. Other symbols used include a baby alligator emerging from and egg, and an adult alligator surfacing from a sewer. A subway car and a policeman round of the important symbols on the reels. A compass is the game’s scatter symbol, and the game’s logo is the wild symbol.

This symbol is valuable during regular gameplay and bonuses. If players get five of the logo symbol on the reels during the regular game, they win a cash prize.

Three of the compass symbol on the reels at once triggers free spins. Players get eight spins of the reels for free. During this bonus feature the egg symbol seen in regular gameplay becomes the baby alligator. Players will only ever see the wild symbol on the second, third, and fourth reel during free spins.

There is also a substitute symbol represented by the Statue of Liberty. This symbol is only seen while free spins are being played. They come with multipliers that can double or triple a player’s winnings. In some cases, players may even get both the double and triple multipliers at the same time. There is also a five times multiplier that may appear on the reels.

Legends of New York is not meant to represent what the city is like now. Some of the game is based on an old myth that alligators actually do live under the streets of New York City.

The rest of it shows players what the city was like in the past. This gives it a touch of nostalgia that older players may appreciate. For everyone else, the game is still an exciting way to virtually experience the city.