Batman & Batgirl Bonanza is a new online slot machine reminiscent of the character’s most classic years. Fans will recognise many of the game’s symbols as characters from the original TV show, such as Batman, Batgirl, Alfred and Robin.

There are unique symbols in the game called Bat-Gang Co-Ops. They are a combination of two characters, such as Batman and Batgirl, and Batgirl and Robin. When these symbols appear on the reels it is as if both symbols are included separately on the reels. Other symbols used in the game include the Batcycle and the Batarang folding knife.

The game’s logo serves as the wild symbol which takes the place of all other symbols on the reels other than the scatter. The game’s symbols are an important part of triggering its many bonus features. When matching symbols land in the first and second columns on the game screen, the Batgirl Locked Re-spins Feature is activated. Five free spins are then awarded and the symbols that triggered them are locked into the reels for the duration of those spins.

Another feature is the Batman Team-Up Free Games. The bonus scatter must appear on the third, fourth and fifth reels after a single spin to trigger this feature. Players are then tasked with matching up the game’s superheroes in their allotted amount of time. Doing so results in players winning anywhere from 12 to 25 spins for free. During those free spins reels one and two merge to create one oversized reel that helps players win more money.

Every Batman themed online slot machine game comes with four progressive jackpots that can be randomly won at any time. This is a large part of the appeal of this game to players whether they are Batman fans or not. 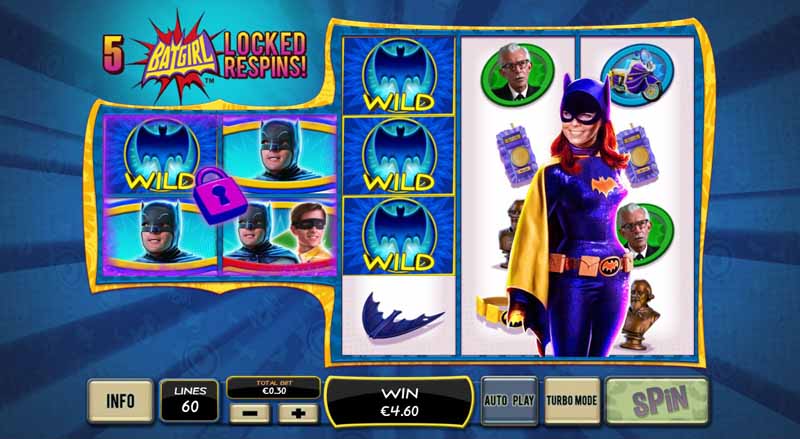