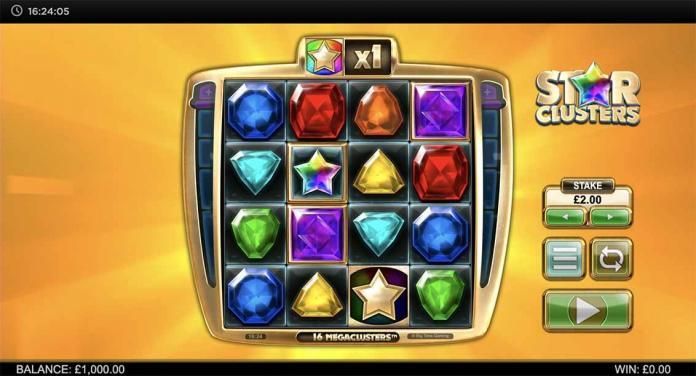 At first glance, Star Clusters Megaclusters looks like it was designed as a classic slot. Yet it has the modern twist, where clusters of the same gem work the way cascading reels do in some of today’s hottest slots.Its other modern twist is an eclectic soundtrack that includes a unique mix of classic video game and electronic music.

The backdrop behind the game screen is simply a solid orangey yellow color. Though there are no visible reels, players will see gems of various colors. The higher paying gems are purple, orange, blue, green, and red. Lower paying gems are yellow and turquoise. The game also has a standard and a gold wild.

Winning money in this game is easier than many other slots. Players only have to get five of the same gem in a row in order to win money. Whether they are vertical or horizontal they make up a cluster that always pays out.

When a cluster of gems forms a winning combination, they disappear only to be replaced by another cluster. This continues until a cluster consists of different colored gems, rather than one matching color.

If this happens five times in a row, free spins are triggered. After the fifth time, further consecutive wins trigger two more free spins. These extra free spins also have the multiplier applied to them, at whatever value it was at after the five consecutive wins. The only bad news for players is that free spins can’t be re-triggered while the bonus is being played.