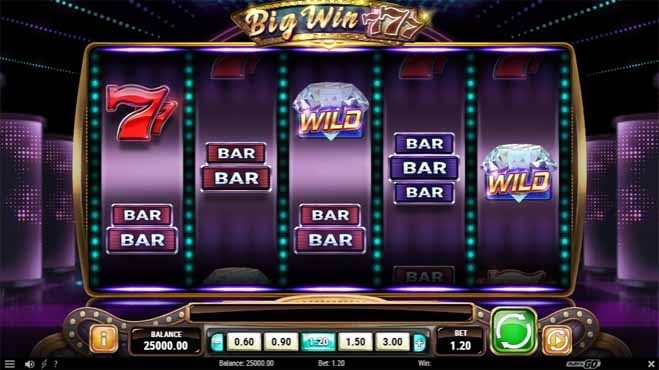 Big Win 777 is based on the original fruit machines. However, unlike traditional slots it has five reels as opposed to three. This is the main feature that sets it apart and gives the game somewhat of a modern twist. Visually and musically, it seems to be based on the typical TV game show.

The glitzy background behind the reels is simply black with strings of colored lights. The reels are purple with a string of lights separating each one. The symbols are simply the number 7 and the traditional bars used in fruit machine slots. A diamond is the wild symbol.

The chance wheel is a special symbol in the game. When it appears on the reels three times within one spin, players get to spin the real chance wheel. In order for this to happen, it has to land on the first, third and fifth reels. The chance wheel is then spun one time. Players are either awarded free spins or a cash prize.

If players do get the free spins, they are given 12 of them. The presence of one or even two scatters on the reels during the free spins gets players additional spins without having to pay. Those that get three of the scatter symbols in one spin during this bonus get more free spins. They may win five, 10 or 20 more. Free spins can be re-triggered at any point throughout this bonus round.

Anytime the diamond wild symbol lands on the reels they become locked wilds for two consecutive spins. The diamond symbol is also cloned while those free spins are being played.

The Booster Spin is a modern bonus feature found in Big Win 777. It is randomly activated during gameplay. This bonus makes it more likely that scatters will land on the reels and trigger the free spins bonus. 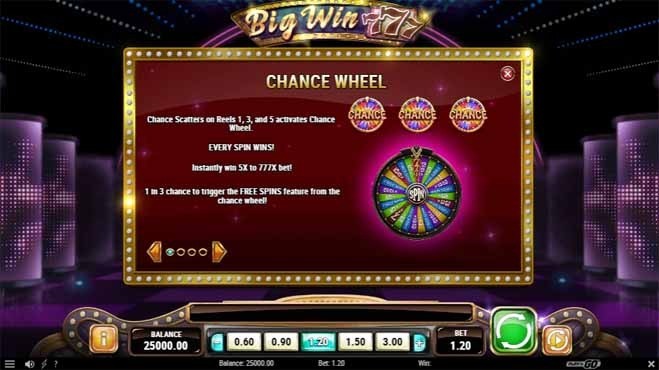 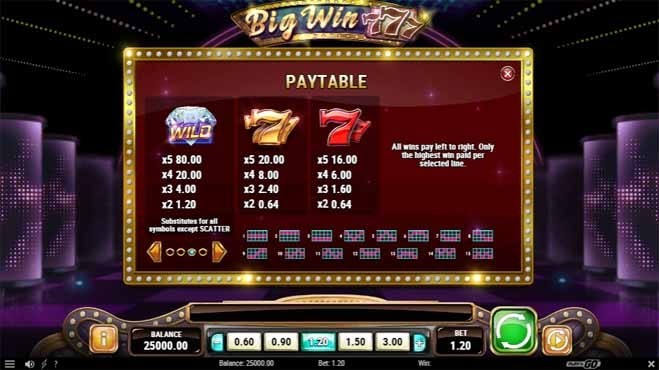 Though at first glance Big Win 777 looks like it doesn’t have much to offer, it defies those expectations. The random bonus is a modern feature that motivates players to stay engaged in the game. Along with the Booster Spin is the chance wheel. Seeing it take on a life of its own after watching for its symbol on the reels creates anticipation for players.

This game can be appealing to players who are accustomed to traditional slots, yet it also has elements that attract today’s players who are newer to the world of slot machines. Players may find that this game is the perfect combination of old and new. By combining elements from years past and today, the slot machine industry is being kept alive an continually growing.