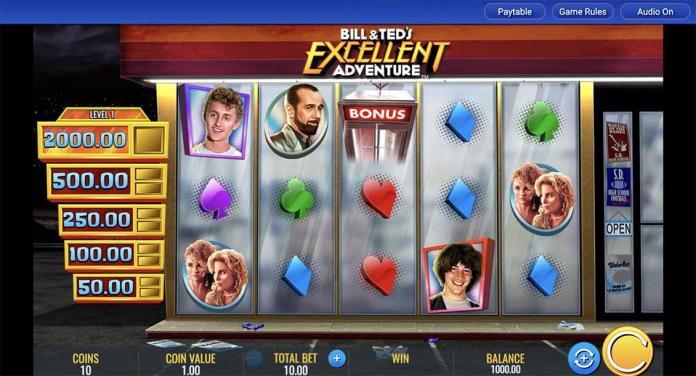 Anyone who has ever seen the movie Bill & Ted’s Excellent Adventure will no doubt enjoy the online slot machine of the same name. The game even includes images exactly how they were in the movie. It also has a soundtrack that includes riffs of rock music.

The background scene behind the reels is the Circle K. This is where the time traveling phone booth was located. Fans of the movie remember that Rufus and Bill & Ted met there. On the reels, the most important symbols are Bill, Ted, Rufus, and the pair of princesses. However, the Wyld is also one to look out for, as it serves as the wild symbol. The phone booth initially appears next to the reels when launching the game. It also serves as the bonus symbol.

The occurrence of three of the phone booth symbol on the reels at once triggers the game’s bonus feature. Players see the words No Way across the screen when their is a possibility the bonus may be triggered. If it is, the words change to Yes Way.

To get to the bonus round screen, the phone booth takes a trip through time. Players are then presented with a game screen where they will get a series of free spins. Before those free spins start, players must click on one of the characters in the game, all of which flash on the screen in rapid succession. The character that a player clicks on then appears above the reels. Each character has his or her own jackpot that players could win.

During free spins, any time the phone booth appears on the reels players get a cash prize, They also get three more free spins added to the initial spins. When the free spins have been played, the value of the multiplier increases the amount of winnings a player gets.

Bill and Ted have their own bonus feature. If both of them appear on the reels within a single spin there is a chance the game will trigger the Wyld Stallions. This is a feature that take symbols and coverts them to wilds, which often leads to a winning combination.