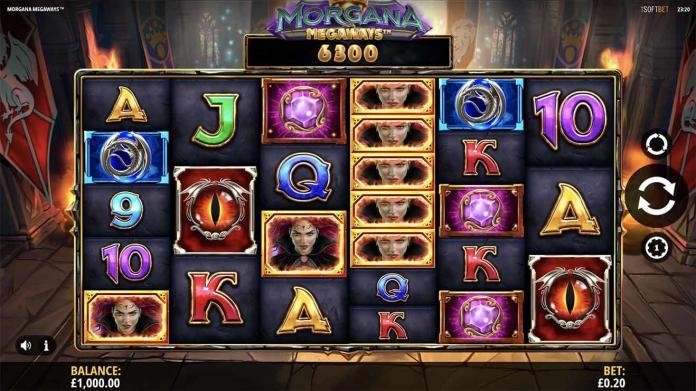 Players who enjoy medieval themed slots are flocking to Morgana Megaways. The game is based on its title character, a witch who is being kept out of Camelot.

When the game loads, players see Morgana’s dark and eerie chambers. This is where she brews her potions and practices her magic. Golden dragons flank both sides of the reels. On them, players see Morgana as the game’s most important symbol, along with pink gems, a dragon’s eye, and a menacing looking silver dragon.

The game also has a green wild symbol and a scatter, with the scatter being represented by a golden grail. There is also a mystery symbol that lands on the reels randomly. To the right of the reels is a meter that is used in the free spins bonus feature.

Anytime Morgana or a standard symbol appears on the reels, the symbol is added to the meter. At first players collect additional free spins for each symbol in the meter, but if they make enough progress, they get a cash prize on top of the free spins. If the mystery symbol appears on the reels during free spins, it is also added to the meter. At the end of the bonus, the luckiest players will have gotten 60 spins for free, though this is a rare occurrence.

The other bonus feature in this game is a random bonus that players may or may not experience. When this happens, the game is altered so that players have more possibilities of winning money. This lasts for the duration of one spin of the reels.