The Legend of Shangri-La Cluster Pays

When you see a slot is created by NetEnt, you can be sure it’s going to be a great one. After all, they haven’t become one of the world’s biggest software producers by accident! The Legend of Shangri-La Cluster Pays is a fantastic addition to the NetEnt portfolio, even by their own very high standards. With some stunning graphics, really big prizes, and innovative gameplay, this slot really does have everything you could possibly ask for. To find out exactly why you should play this NetEnt slot, just read through the comprehensive The Legend of Shangri-La Cluster Pays review below!

As soon as this slot loads, you’ll see that NetEnt have included their customary fantastic graphics. All the symbols have been beautifully rendered, plus they’re all unique – you won’t find any standard 10-A symbols at this game, which is always good to see. The backdrop, which shows the legendary city of Shangri-La, also looks great, plus the wise red panda in the corner of the screen adds some more fun to the game – as well as some nice features, which are explained later in this The Legend of Shangri-La Cluster Pays slot review.

The Legend of Shangri-La Cluster Pays doesn’t really have reels and paylines. Instead, it’s a game played with 30 symbols on the screen, and your goal is simply to get 9+ identical symbols in a cluster. This means that there’s no way to change the number of paylines at this game, however you can alter the amount of money you bet per spin, simply by adjusting the “Level” and “Coin Value” fields. The minimum bet per spin is just £0.10, while the maximum possible bet is £200. This means everyone should find a bet level to suit them.

As already mentioned, you’ll win money if you get nine or more symbols in a cluster. A symbol is deemed to be in a cluster if it is attached vertically or horizontally to an identical symbol. The more symbols in a cluster, the more money you’ll win! The snow leopard is the highest paying symbol on the reels, and getting 30 of this symbol will lead to a payout worth a massive 10,000x your bet. The two other animals on the reels are also high paying symbols. Even getting a large number of the lesser paying symbols will lead to a nice prize though!

You might think that the clusters feature is the only special feature at this slot, however you’d be very wrong. This is because there are a number of different bonus features to talk about, and the first is the substitution symbol – this is the gold symbol with a green circle on it. Substitution symbols are effectively wild symbols, as they’ll transform into the symbol that leads to the best winning combination. This symbol appears on all reels, and can substitute for any other symbol, excluding the Free Spins symbol.

The substitution symbols don’t just spin in on the reels though – they can also be added randomly to the reels by the red panda. If you get two separate clusters of the same symbol, but not enough to win a prize, substitution symbols could be added to the reels, and this addition of symbols only stops once you’ve been granted a win.
There’s another random feature that can be activated when you spin in two non-winning clusters of the same symbol. This second random feature can see the clustered symbols held in place, before a free respin is initiated. You’ll then keep getting free respins, providing you manage to spin in another symbol identical to the clustered ones. So, you could end up with loads of winning symbols thanks to this fantastic feature!

The main bonus at this slot is the free spins, and they’re activated by getting three or more Free Spins symbols either completely or partially on the reels. You’ll get some help doing this, as if you have two symbols showing and a third Free Spins symbol lands to the right, but just off the reels, you’ll see it nudged into place. The more symbols you use to activate the feature, the more free spins you’ll receive.

The Legend of Shangri-La Cluster Pays is a great addition to the portfolio of NetEnt games, and will be enjoyed by nearly everyone – especially those who have already played and enjoyed the fantastic Aloha! Cluster Pays. While the prizes can be absolutely huge and the bonus features are really fun, the biggest reason why people play this game is the different gameplay though. You won’t find paylines at this slot, and this means it manages to stand out from the crowd. You’ll find The Legend of Shangri-La Cluster Pays at most casinos offering titles from NetEnt, so why not have a few spins today? 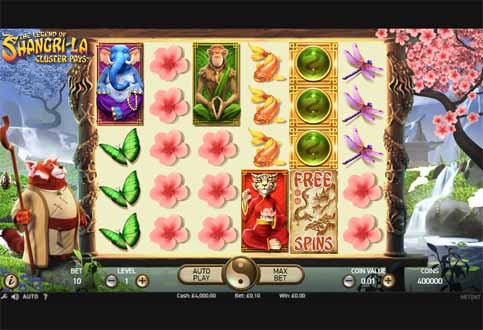 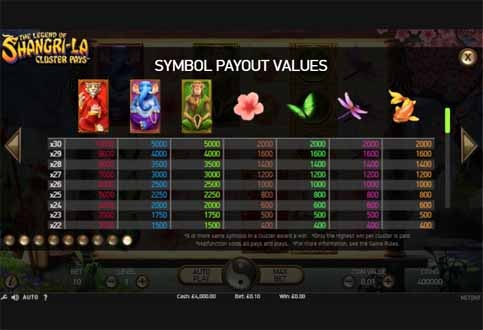