Reminiscent of America in the 1950s, Pin Up Girls is an online slot machine game that pays homage to the decade. The game features the women typically pictured in 1960s magazine and newspaper ads. It also features one lucky guy that gets to mingle with the pin up girls.

The game is set on the beach, with a view of the sea and of people building sandcastles and having picnics. In the far distance players will see a typical boardwalk roller coaster ride. Players will also see a man standing next to his car, a red convertible, and watching the people on the beach.

The symbols in the game include the pin up girls as well as the red convertible, a pink moped, pair of roller skates and even an old fashioned transistor radio. The game’s highest paying symbol is the man mentioned above, followed by a blonde, a red haired woman, a brunette and an auburn haired woman. The game’s scatter symbol is a blonde maid. For each appearance of the maid on the reels after a spin players win a set amount of money. When players get at least three of them on the reels after a single spin it triggers the bonus round. Players then see a new game screen where a basket is sitting, holding five posters. They choose one of the five posters and hang it on an empty wall behind the basket. The longer the poster stays on the wall before it falls off the more money players will win.

The wild symbol in the game is represented by a woman with flaming red hair and the word “wild.” When this symbol appears on the middle of the screen on the fourth or second reel it becomes an expanding wild and players win 10 spins for free. During the free spins a pin up girl stands on both sides of the reels.

Packed with beautiful women, Pin Up Girls is a fun online slot machine game with a lot to offer. 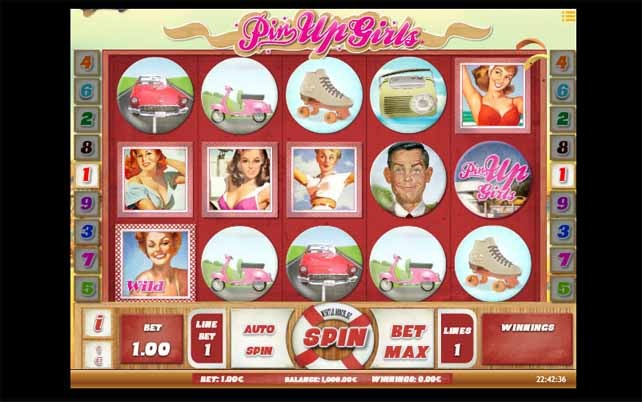 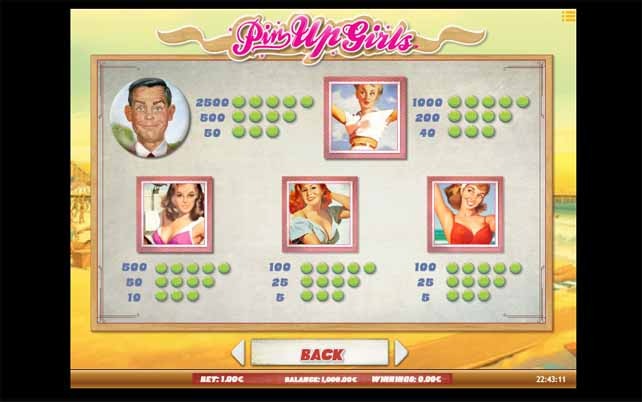