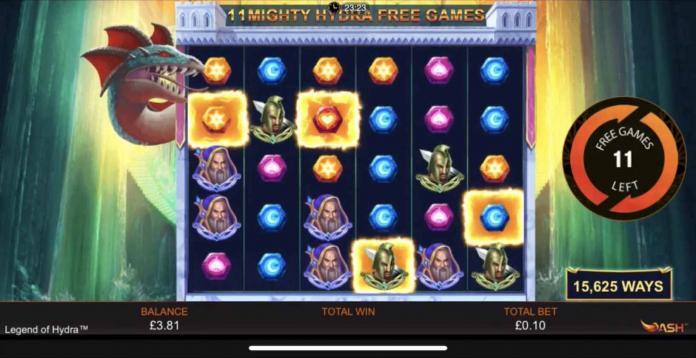 The larger than life scene behind the reels consists of several ivory white columns with a waterfall in front of them. In front of the waterfall is the reels. On the left side, players will see the reel surrounded by all four of the dragon’s heads. The reels are filled with symbols such as royal characters, warriors, knights, and wizards. Other symbols used include stars, moons, and glowing rocks. A crown serves as the wild symbol, with an additional fire symbol and bonus coins that are important.

Players should look out for power zones on the reels. They cover a few spaces and are designated by a yellow color. When different symbols land in the zone, they change so that they are all matching symbols, leading to wins.

Randomly, symbols on the reels will have a fiery frame added to them. Those flames remain on the reels while they are spun. This can help connect multiple power zones to each other.

A fire symbol in a power zone changes the surrounding symbols so they match. In most cases this results in a winning combination of symbols. Whether it does or not, the power zone will then disappear from the reels. Above them is a meter which then becomes filled.

A full meter will then trigger one of the four heads of the Hydra. Heads are randomly woken up from spinning the reels.When they do wake up, they put an additional feature on the reels. Sometimes players will get more power zones, while other times they will get mystery or wild symbols. At other times they may get power zones complete with multipliers. No matter which feature players get, each one has its own animation that comes alive on the screen.