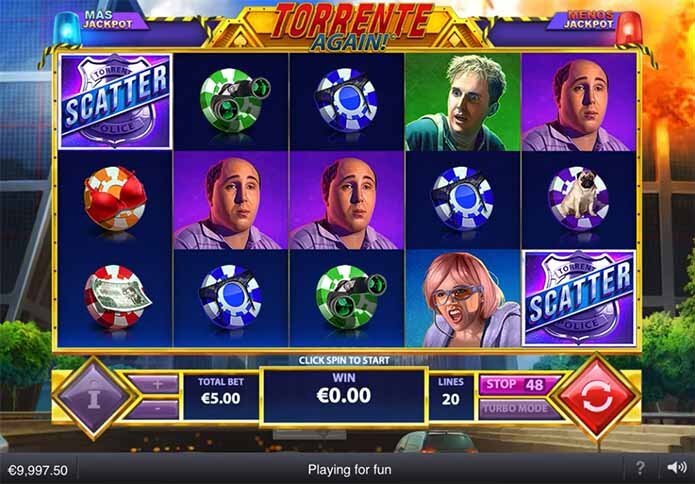 For those who don’t watch Spanish movies, the online slot Torennte Again may be confusing at first. The game is based on a Spanish character named Inspector Clouseau and is a sequel that follows him on his second investigation. The theme of the game is based on cops and robbers.

Set in Madrid, the scene behind the reels depicts a typical road in the country. It also features towers to the Gate of Europe. Along the reels, players will see symbols such as Torrente, and his sidekicks. Gayolo, Barragan, and Ricardito are characters those have seen the movie will recognize.

There are a few bonus features built into the game. One is triggered anytime the Torrente symbol lands on the first reel. When this happens, the Loco Respin feature is activated. It spins the reels twice without players having to pay for each spin. While these spins are being played, wilds and the Torrente symbol remain locked, making it more likely winning combinations will be achieved.

Another bonus feature that is triggered randomly during gameplay is Wild Hearts. It causes Torrente to go skydiving, during which he adds to the reels as many as eight wild symbols.

When the police badge scatter symbol lands on the reels three times in one spin, free spins are triggered. This is referred to as the Private Eye Bonus. It provides players with two different options. While some players choose the Naughty Night Free Games, others choose the Office Slave option.

Naughty Night Free Games give players four spins for free. Those spins are played in a virtual strip club. Torrente strolls the reels with his sex doll companion. In the process the reels are covered in as many as eight pairs of ladies underwear. Each pair of underwear that lands on the reels becomes a wild symbol.

The Office Slave Bonus is much easier to navigate. Players are taken to a new screen and shown 12 photos, each of which depicts a detective acquainted with Inspector Clouseau. One by one, players click on the photos, which may reveal a video clip or a cash prize amount. Players win whatever they click on and the bonus ends when they click on the photo that says collect.

Aside from all of these bonuses, the game does have a progressive jackpot. Winning the jackpot is a random occurrence generally triggered by placing high bets on each spin. 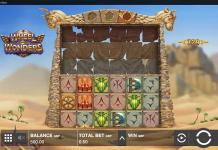 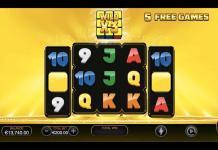 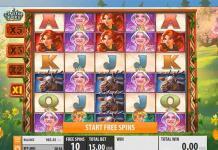