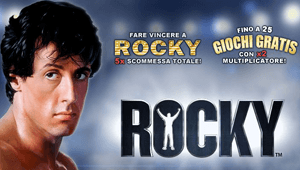 Relive the classic Rocky films in this 25 payline slot game from Playtech. The Rocky slot game really delivers the knock-out blow with high quality graphics and frequent cut scenes from the motion pictures.

From the outset, followers of the film will be familiar with the old opponent characters such as Ivan Drago, Apollo Creed and Clubber Lang. Not to mention of course the usual cameo appearances from Adrian. Don’t look at her Rocky… oh no you’ve been punched again!

As with most Playtech slot games, the Rocky slot game isn’t exactly against the ropes when it comes to bonus play. Loaded with features and bonuses, you end up expecting to win on each spin. Supplemented very nicely by the gamble feature, which we will come to shortly.

The Rocky slot has one of the easiest multipler bonuses to understand. Simply spell out the name ‘Rocky’ across the five reels and win five times your wager.

To qualify for the knock-out bonus round, you simply need to match a boxing glove on reel one and reel 5. Given the scale of the bonus, this actually comes up a fair bit which is great news for the player. Our screen shots are below as usual of course, but you can see how quickly we hit this bonus. On activating this bonus you get to select which fighter you go up against from the films. You basically win three times your initial wager if Rocky beats the opponent across all the rounds, and you win a massive 30 times your wager if you knock the opponent out before the match end.

The Rocky slot game is a very profitable slot game to play, and we found ourselves up by a considerable amount within the first 30 minutes. Of course all experiences will differ, but after trying three different sessions, and of course taking moderation into account, the return to player is generally very high!

Share the Rocky slot game with your friends via your social network!