Getting in the festive mood is even easier when playing the Secret Santa slot game. Best of all, you don’t need to spend a tenner on a useless gift for a work colleague!

To be fair, it doesn’t really matter if you’ve been naughty or nice this year, as you will benefit from the big bonus wins all the same. This celebration of the Festive Season can be enjoyed at any time of the year and the game has a great fast paced energy to it with the Secret Santa Gift bonus bringing unpredictable variety to the experience. With this rich collection of bonus features it will be entertaining players for years to come.

Gaming giants Microgaming seem to have a lot of exciting Christmas ideas in their huge selection of slots and they have managed to release another gem in Secret Santa. Take a sneak peek at what gifts Father Christmas has to offer this year and maybe you’ll even be lucky enough to make his nice list. This well-designed game will definitely have you embracing the festive spirit as there are tons of bonuses to take advantage of and plenty of cash to be won. It’s quite often that we’re unfortunately on the wrong end of a duff Secret Santa present at home or at work, but happily for you there are no bad prizes here and you’re almost guaranteed to be on to a winner. Don’t just take our word for it – read our extensive review and find out why this is the best game to play this Christmas!

Upon loading the game for the first time, you’ll notice a small snow-covered town and fields that make up the background a joyful, jingly soundtrack that will certainly get you in the spirit. The colour scheme is a warm yellow and red like you’d expect from a Christmas-themed game and symbols that will win you money include a turkey, a Christmas pudding, a fireplace, stockings, gifts under the tree and Santa Claus. There’s nothing too over the top with this slot – as can be the case sometimes with a festive title – and it would be well suited even to people who aren’t such a huge fan of the festive period.

Secret Santa has five reels and an amazing 1024 paylines which is a gigantic amount, even for payline enthusiasts Microgaming. The number of ways that you can win cannot be altered either but most software developers choose to do this these days as they’re aware that gamers aren’t so silly to reduce them, thus lowering their chances of winning. There’s a lot to keep track of but it means you’ll win by matching symbols in adjacent columns instead of specific patterns.

Players can set the coin range between 0.01 and 0.20 and they can place up to 10 of these coins on every spin. The maximum that you can play with is 100 while the minimum is 0.50. This means that most players will be happy with the wagering limits on offer but it does probably target the middle-range gamers. It’s possible to alter your limits using the arrows either side of the amount and there is an opportunity to use the Auto Play button in which you can set a certain number of spins to happen simultaneously.

But what money can you win at Secret Santa? Well the Christmas symbols are worth looking out for as they can win you a decent amount of cash but the most lucrative come in the form of the Secret Santa and the Christmas Cracker. The first one will act as the Wild symbol and will return 800 coins for 5 matches on a reel, while the second acts as the Scatter symbol and returns a massive 5,000 coins for 5 matches. Unlike most slot games, the scatter does not release the bonus rounds as these can happen at any time during the base game.

There are tons of bonus features that can happen in the game at any time when you see a big present appear across your screen. Wild Reels is the first one and happens when 3 reels are turned Wild and the prizes for that spin will be recalculated; Wild Boost happens when all symbols of one type will turn Wild and the payout is recalculated; Scatter Spree will happen when all the symbols act as scatters and will be worth a payout as long as there’s three on the screen; Mystery Multiplier is when your win will get multiplied to a maximum of up to 10x; Rolling Reels happens when the symbols which formed the winning combination will disappear and allows more symbols to fall into place with each new win increasing the multiplier by 2x and can go to a maximum of 12x; Dashing Wilds is when the reels spin again and four Wilds are added at random places; and Free Spins where you will get five spins and all the wins will be multiplied by 3.

Even though there is enough there to keep us going till next Christmas, there is one more to discuss and that’s the Five of a Kind feature in which a winning combination of five symbols will pay you out but then the symbols will change into another set. This means that essentially you will be getting two winning combinations in a row which will give you a massive payout, especially if you manage to find lucrative symbols!

This is a great game by Microgaming that has come just at the right time of the year considering how generous the prizes on offer are! There are tons of bonuses that will keep you sane during the Queen’s speech on Christmas day and with 1,024 ways to win there’s little chance of you searching for other titles online. Even if you’re reading this review in the middle of a scorching hot summer’s day in July, made sure you give this game a blast! You really won’t regret it and it may even make the most cynical of Scrooges crack a smile. 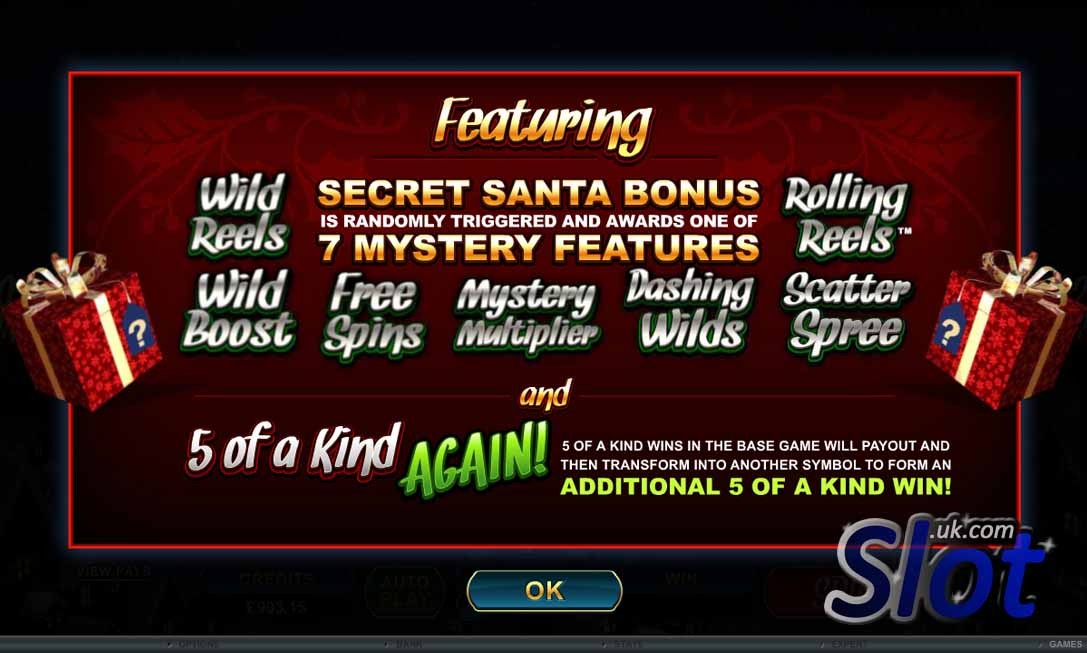 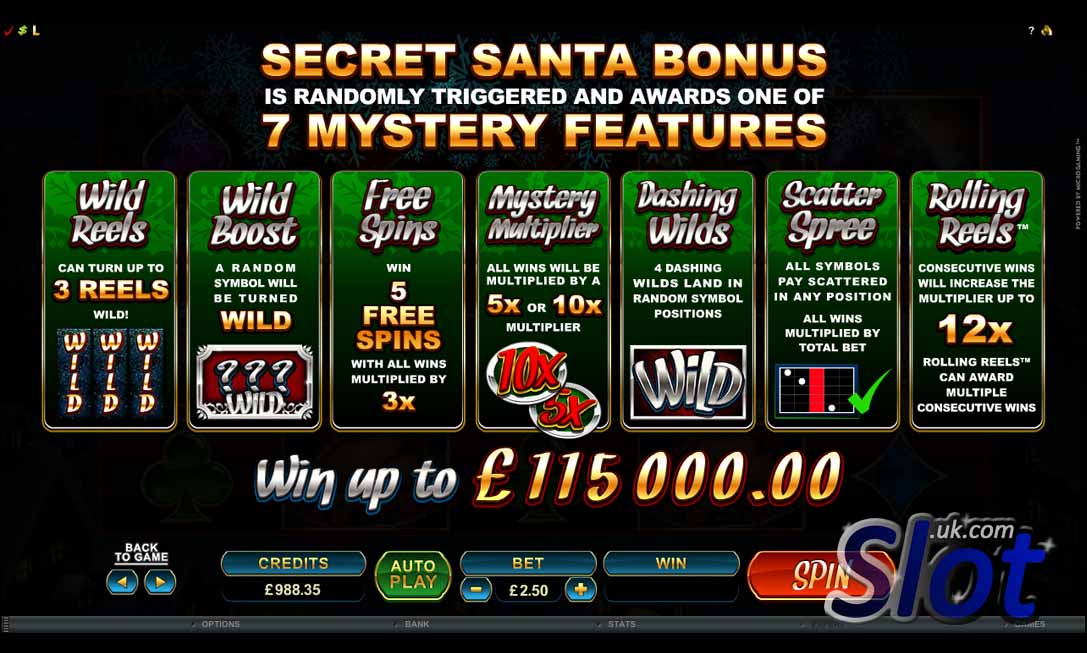