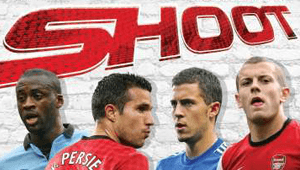 Established in 1969 and one of the most popular sports magazines on the planet, Shoot! magazine is still widely regarded as one of the most popular football magazines today. The Shoot! Slot Game is based around this and carries the theme into the slot very nicely. Featuring tons of the best footballers throughout history, Shoot! slot game packs a nostalgic punch down memory lane. Also worth mentioning is that the game features a great soundtrack throughout.

Shoot! slot game is a 50 payline, 5 reel slot that carries a wild substitute and scatter symbols that set off a trigger for a Multi Level Bonus game.

The main attraction in the Shoot! slot game is undoubtedly its Trade ‘Em Bonus, from where two other bonus features can be accessed which further enhance the player’s balance. Match three or more Bonus Scatter Symbols across five reels and a generous second screen feature is triggered, taking the player right back to a 1970’s school desk plastered with 12 trading cards. This then awards 4 selections which in turn reveal generous prizes.

Along with the valuable prizes, special tokens are on offer that give the player access to either the Free Spins bonus, or the Magazine Bonus which has two additional bonus levels to achieve.

Free Spins – The player simply hits a spin button before the plastic toy scoreboard, to reveal a number of free spins at random that range from between 10 to 35, with all of the wins doubled during the feature.

The Magazine Bonus – Takes you back to how your bedroom looked as a child from the era, fully equipped with shagpile carpet and the type of bed-linen that could only be found on market stalls. The gamer selects from 12 Shoot! Magazines spread out across the bedroom floor until a ‘red card’ ends the bonus round, taking the the player to the Trade ‘Em bonus if any picks remain unclaimed there.

Furthermore to this rewarding and highly entertaining bonus opportunity, Shoot! offers Wilds and Scatters which can then be used to create winning combinations from wagers in a range of between 0.01 to 100.00.

Since the game is situated around football’s golden era, it’s perhaps unsurprising the achievable wins are very substantial, using the base game offering a top take-home of 15 000.00, and double that on Free Spins, along with the bonus game that can provide up to 10 000.00.

Slot.uk.com are excited to offer Shoot! slot game so join us on the terraces along with the likes of Maradona and Pele for the best sporting trip down memory lane with the opportunity to win some huge prizes.