The Slotfather is back, and this time it’s bigger and better than ever! The original game is one of the most popular slots ever created by BetSoft, ands this title takes all its best elements, and then adds to them. As with nearly all titles from BetSoft, the graphics are absolutely amazing at The Slotfather: Part II, however graphics aren’t everything in the online slots world. Luckily for slots players though, the graphics aren’t the only fantastic thing you’ll find at this game, as you’ll see when you read through the rest of this The Slotfather: Part II review!

This is a slot with five reels, and each reel contains three symbols. This means that the layout is the same as the previous version of the game. The big change comes with this though: while the first version of the game had 30 paylines, this version has 243 different ways to win. This means that there’s no need to worry about paylines – instead, getting identical symbols on adjacent reels could lead to prizes.

Everything about this slot harks back to the gangster world, and there’s clearly a big nod towards The Godfather – although the name of this game should give that away! You’ll find a menacing looking hood to the side of the reels, and all the symbols either contain gangsters, or items that might be associated with them, such as playing cards and wads of cash. The three gangsters found on the reels are called Fat Tony, Frankie (Knuckles) and Snake Eyes Sammy. All three play important roles in the game, not least because they come stacked on the reels.

Of all the symbols, it’s the Slotfather himself who is the most valuable though. If you manage to get five of this symbol across the reels, and are playing at the highest stakes, you’ll scoop a prize worth £1,500. Now, this doesn’t seem like a huge amount when compared to other slots, and it really isn’t. Don’t worry though, as the bonuses offer a fantastic way to win some really large amounts of cash. The other higher paying symbols are the truck, the playing cards and the cash.

Slots from BetSoft nearly always come with a huge number of bonus features, and this is certainly the case when it comes to The Slotfather: Part II. The first of them is the wild symbol, and this appears on reels two and four during the base game. This symbol can substitute for most other symbols, and help to create winning combinations.

The next thing to mention is the scatter symbol, which is represented by the truck. Because it’s a scatter symbol, you’ll receive a cash prize whenever you get two or more of them anywhere on the reels. Getting three or more will also lead to you getting free spins – three scatters leads to eight free spins, four scatters leads to 12 free spins, and five scatters will see you getting a massive 20 free spins. During free spins, the wild symbol occurs on the second, third and fifth reels, plus all prizes are doubled! Getting three or more scatters while the feature is active will lead to extra free spins being awarded. It should also be mentioned that you’ll receive the Big Boss Bonus once the free spins end, which sees you given a random cash prize.

The next feature to talk about is called the Gangster Respins. You’ll notice that three of the gangsters come stacked on the reels, and when you get two entire reels filled with the same gangster, you’ll receive a free respin. This means that you’ll have another chance to win a prize. Perhaps more importantly though, it also gives you an extra chance to activate the Gangster Bonus, which is this slot’s main bonus feature.

The Gangster Bonus is activated when you manage to get three entire reels filled by the same gangster. You’ll then head out to collect protection money, and each of the gangsters has a different style. Fat Tony is steady, meaning that he’ll always win you some money, however it’s not always that much. Frankie (Knuckles) is the most likely to win you a huge prize, however his methods could also lead to you winning a tiny amount. Snake Eyes Sammy is the middle ground between the two, not taking too many risks, but also not being too cautious.

It should also be mentioned that this slot has a Double Up feature, which gives you the chance to gamble any prize you win during the base game. You can choose to either risk all your winnings, or 50% of the amount you’ve won. Simply guess whether the coin will land on hands or tails, and if you’re correct, you’ll double the money you’ve gambled. If you’re incorrect though, you’ll lose the money you’ve gambled. It is completely up to you whether you want to use this feature or not.

It can sometimes be a risk when slot producers make a sequel to an already popular game. After all, they could undo all the great work they’ve done in the past, and create something that fans really don’t like. This isn’t the case with The Slotfather: Part II though, as the people over at BetSoft have done a fantastic job. They’ve taken the best features of the first slot, and then added some extra fantastic features – including the exciting 243 different ways to win. So, The Slotfather: Part II should be the perfect addition to any online casino’s portfolio! 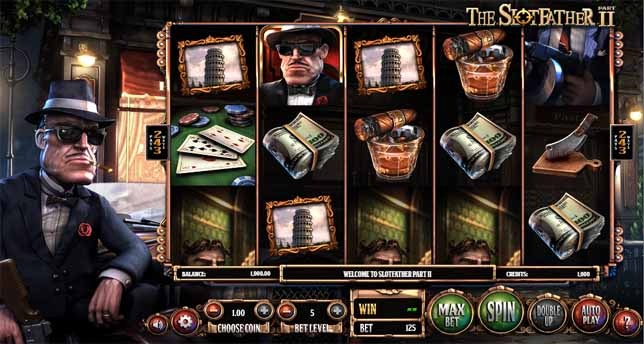 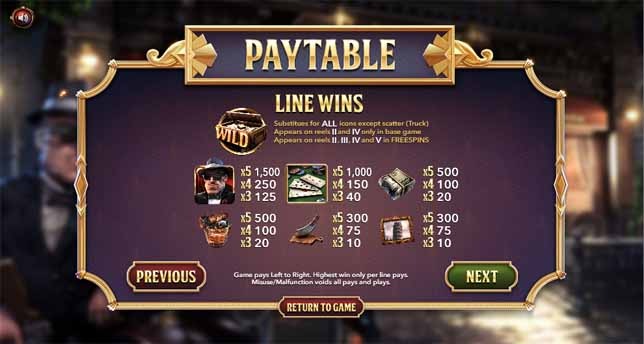