Anyone who grew up watching Hannah Barbara cartoons may remember the character Top Cat. He now has his own online slot machine game named after him. The reels are filled with characters from the 1960s cartoon, such as Spook, Choo, Fancy-Fancy, Brain and Benny. Charles Dibble, the neighborhood cop on the cartoon, is also seen on the reels.

Fish bones serve as the wild symbol in Top Cat. When players get this symbol on every reel within a single spin they are in for some huge winnings. Players will also want to look out for the bonus symbol, which awards players the Masterplan bonus if they get the symbol on the first, third and fifth reels on one spin. During this bonus round players get to choose a master plan which rewards them with a bonus. There are five possible bonuses players could win; including Construction Site Wilds, Cash Picker Bonus, Diner Free Spins, Maharajah Heist and Dibble’s Free Spins.

In addition to these bonus features that are triggered a specific way there are also five bonuses that can be randomly triggered during the game. These random bonus features involve all of Top Cat’s crew coming up with a plan to help line players’ pockets with money. Choo brings Piano Wilds, Benny brings Colossal TVs, Spook brings the Mice is Nice Feature and Brain brings Water Wilds. The only character players don’t want to see is Dibble, because his presence ends the randomly triggered bonus game.

There is also a re-spins feature that is triggered anytime the Hot Dog Wild appears as a stacked symbol on the reels. Every time a free re-spin is played the Hot Dog Wild walks across the game screen.

Aside from everything else this game has to offer, players also strive to win the Jackpot King Progressive, which comes with generous cash rewards. This puts Top Cat at the top of the list of desirable slot machine games online. Even more so when looking to play similar slots as Blueprint have also released the 80’s classic cartoon, Count Duckula. 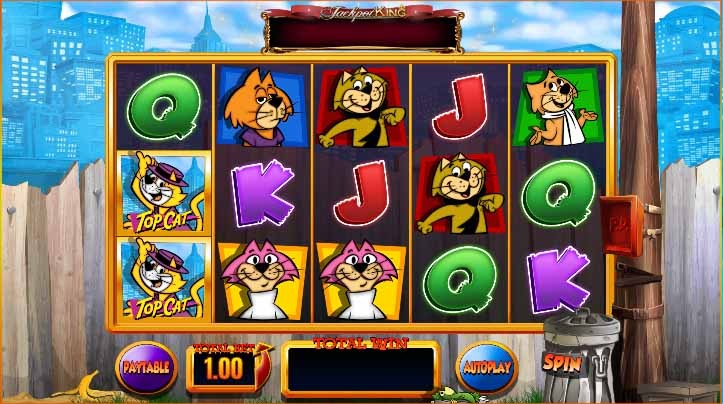 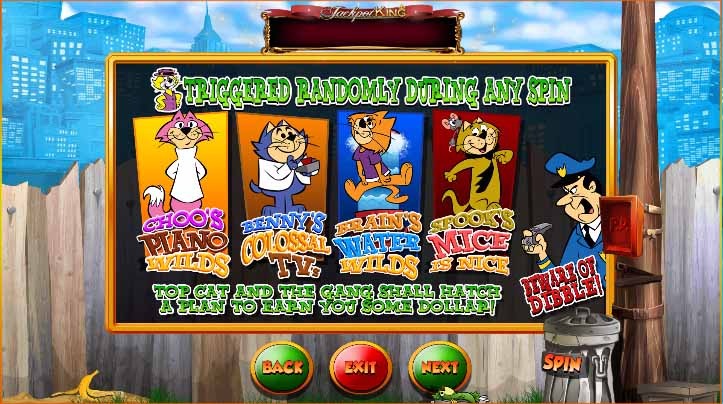 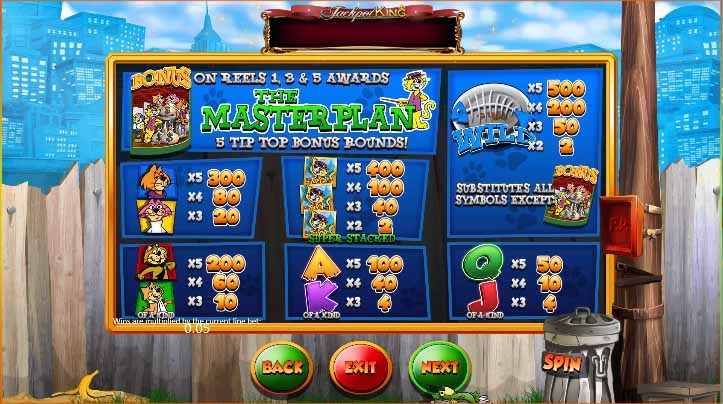