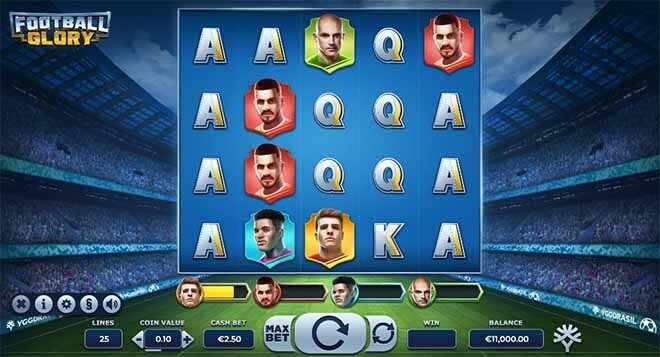 Set in a stadium with a soccer field, spectators dot the seats on both sides of the reels. The field stretches out from in front of the reels to behind them. On the reels, players will notice theme appropriate symbols. These include football players, one each clad in yellow, blue, green, and red. The wild symbol is simply the word, spelled out in gold letters. The scatter symbol is represented by the words ‘free spins.’ During free spins there are also two trophy cup symbols on the reels, with one being silver and one being gold.

Below the reels players will see each of the four players. Each player has his own meter, which is filled one by one as those particular symbols help form winning combinations.

When any of the player symbols fill their meters is triggers the Superstar Mode Bonus. If this happens, players get seven spins of the reels for free. The symbol of the player whose meter was filled becomes a sticky wild. They stay that way until all free seven spins have been completed.

Getting three of the scatter symbols on the reels at the same time triggers the free spins bonus. This gets players seven free spins, while four scatters get them 14 spins and five scatters gets them 21 spins of the reels for free.

Modifiers are always applied to free spins. There are several different modifiers players may end up with. One of them is the All Stars Free Spins. This modifier turns all the highest paying symbols on the reels into sticky wilds. Other times, players may only get a single sticky wild landing on the reels.

Other modifiers include one that randomly turns every symbol on the reel into a wild. The Extra Spins modifier awards players with as few as one or as many as three extra free spins. The Extra Cups modifier drops five each of the gold and the silver trophy cups on the reels. This makes it more likely players will win money.

Both cup modifiers can also be added to the reels randomly, even during regular gameplay. They will only ever land on the fourth and fifth reels. Players are then taken to a new screen filled with five soccer balls. When a player clicks on one of the five balls, they are either awarded with free spins or given a cash prize.

During regular gameplay, a silver cup symbol gets players a cash prize and free spins. A gold cup does the same thing, but comes with a larger cash prize and a boost for the free spins bonus.