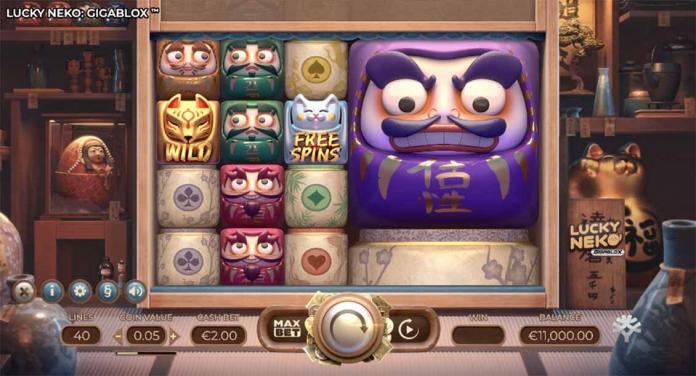 Japanese themed slot machine games are always popular with players around the world. Most of them are associated with good luck, making these games extremely popular in virtually every casino. In the case of Lucky Neko: Gigablox, lucky dolls ( a significant part of Japanese culture called daruma dolls,) served as inspiration for the creation of the game. It features the Maneki Neko cat, which in English translates to beckoning cat.

Set in front of a Japanese temple, the background behind the reels includes various objects that are important to the culture of Japan. Some of the objects seen in the background even shake when the reels are spun. The scene includes a Japanese banner, as well as cherry blossom trees, bushes, and vases. To the left of the reels, the game’s Maneki Neko cat keeps an eye on players’ actions and even waves at them.

In keeping with the title of the game, Gigablox serve as an occasional symbol on the reels. The symbols that are more commonly seen include daruma dolls in various colors. A golden cat serves as the wild symbol and a lucky cat serves as the scatter symbol. In some cases, the golden cat wild may take the form of a Gigablox.

Players should be on the lookout for the lucky cat, because if he lands on the reels five times within one spin, they get free games. This feature can be re-triggered, though it will never grant more than 16 free spins at once. While free spins are being played, the game board expands to add extra rows. The Gigablox may also appear as an expanded symbol during this part of the game.

However, players cannot start their free spins until the game has randomly picked an icon. The one it picks is then used as the Blessed Symbol. This is good for players because it can help them win even more money. It increases the value of the symbols on the reels during free spins, doubling some of them so players win twice as much.