Almighty Reels – Realm of Poseidon is a new online slot machine from the people over at Novomatic, and if their other games are anything to go by, this new title should be a fantastic one! You’ll find that it offers a great theme and some really enjoyable bonus features, plus you’ll also find that you can win a seriously large sum of money on every spin of the reels. So, if you fancy playing Almighty Reels – Realm of Poseidon, why not start those reels spinning around today?

You’ve probably already seen a whole host of slots based on ancient gods before – just think about the Age of the Gods series, for example, or the Norse-inspired Thunderstruck. There’s always room for new names in the niche though, and this is especially the case when they are as good as this new online slot machine from Novomatic. Any future games released with the same theme will have to live up to a lot though.

Almighty Reels – Realm of Poseidon is a slot with five reels and three rows, so it is laid out like most other online slots out there. You’ll find 25 fixed paylines spread over the reels, and the fact that they’re fixed means that you can’t decrease the number of active paylines if you want to. This isn’t uncommon though – most new online slots now have fixed paylines. Why would you ever want to reduce the number of paylines anyway though? After all, doing so only means that you’re lowering your chances of spinning in a winning combination.

You will find that there is a wide range of different betting options at this slot, therefore meaning that both low and high stakes players should enjoy spinning the reels. The minimum bet amount is just £0.25, while the maximum possible bet is a rather impressive £500. As with all online slot machines, the more money you bet, the bigger the potential prizes will be, so think carefully about your bet sizing before you start playing the game.

But what about the prizes at Almighty Reels – Realm of Poseidon? Well, the highest paying symbol on the reels is Poseidon himself, and he can award a prize worth £2,000 if you manage to get five across a payline. The fact that giant 3×3 symbols can appear on the reels – more about this later – means that it is possible to get multiple wins on the same spin though, so you could find yourself winning thousands and thousands if you’re lucky. All other unique symbols can lead to some nice payouts, while the 10-A symbols are the lowest paying symbols at this game, as is usually the case at online slots.

There are a few different bonus features to mention when it comes to Almighty Reels – Realm of Poseidon, however the simplest of these is the wild symbol. This is really easy to spot on the reels, and as with most wild symbols it can replace other symbols in order to create winning combinations. It’s not the most exciting bonus feature at this slot, however it is probably the one that will help you win the most amount of money while you’re playing.

You won’t fail to notice something else on the reels when you play, and it’s the fact that huge 3×3 symbols can appear every time the reels are spun. Each spin will have a different 3×3 symbol on the reels, and this can help you to win some huge prizes. Just imagine: you land the symbol square in the middle of the reels with a couple of wilds around it – that’s going to lead to a supersized payout for you!

The main bonus at this slot is activated when you manage to get the large 3×3 coin symbol fully showing on the reels. When this happens, you will receive 10 free spins, but before these free spins start, one of the higher paying symbols will be chosen. This high-paying symbol will then be the large symbol for the duration of the free spins. You should find that the bigger wins appear while the free games are active, so you’ll want to activate this bonus feature as often as possible.

Almighty Reels – Realm of Poseidon is a fantastic game from the people over at Novomatic. It’s not the most complex of slots, and it doesn’t have a huge amount of bonus features, however this simplicity is part of its charm. The fact that there are giant symbols on the reels also ensures that this slot always stays exciting while you play. So, if you think that Almighty Reels – Realm of Poseidon sounds perfect for you, why not start spinning the reels today? 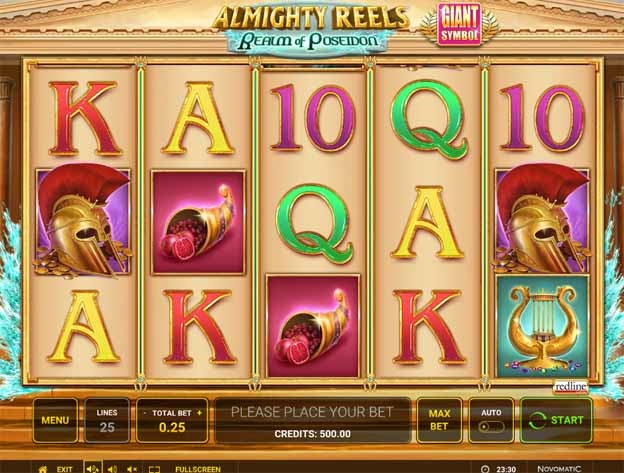 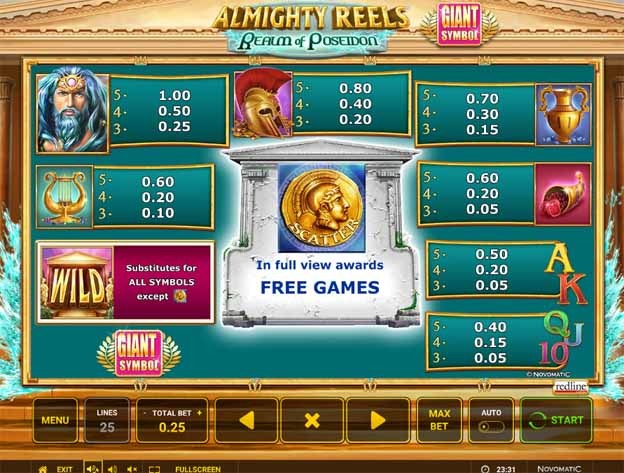