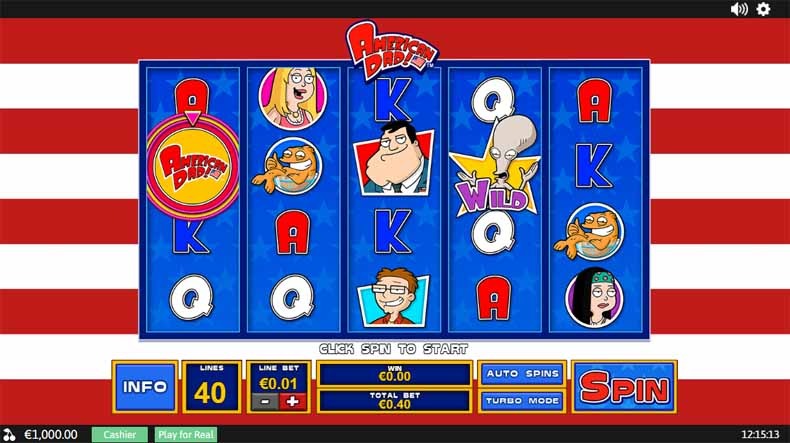 Some TV shows come along and make their mark on the world. This applies to cartoons as much as any other type of show. So it is not surprising that American Dad, a series by the creator of Family Guy, Seth McFarlane, now has its own video slot machine. Whether players have ever seen the show or not, the game has entertainment value.

American Dad is one of the most popular cartoons of all time, so it’s a surprise that it’s taken until now for it to be made into a slot machine. The wait is over though, as Playtech have been busy creating their exciting new American Dad slot, which features all your favourite characters from the show, including Stan, Roger and Francine, plus it also has many great features, all of which are designed to bring excitement, as well as the prospect of some really big prizes!

The American Dad slot is not that inspiring when you first load it, as the reels look relatively plain, and the background is simply a patriotic flag. As has been seen time and again in the world of online slots though, initial impressions can sometimes be misleading, and this is certainly the case when it comes to American Dad. While the look of the game might not be stunning, the gameplay and general enjoyment more than make up for it.

American Dad is a cartoon fueled by political humor. This is why the background for the game are the red and white stripes of the U.S. flag. The reels are covered in the blue background and stars that also appear on the flag of the U.S.A.

The symbols seen on the reels are all characters from the TV show. This includes Hayley, Stan, Francine,Klaus, Steve, and Roger the Alien, who acts as the wild symbol. The bonus symbol is called the Schmooblydong Wheel. The scatter symbol in the game is the logo of the TV show.

As already mentioned, the reels of this slot feature many of the show’s most famous characters, however it is Roger who is the highest paying symbol. If you can get five Stan symbols across a payline, you’ll be able to take home a prize worth 750x your bet per payline. Stan and Francine are also high-paying symbols. The lowest paying symbols are the Q, K and A symbols, and it’s a shame that they have been included in this slot. With so many other characters in the series, surely Playtech could have used them instead of the generic symbols?

There are 40 paylines in total at the American Dad slot, and these paylines are fixed. This means that it is not possible to change the number of paylines being used on a spin. You can change the amount you bet per spin though, as you’ll see in the next paragraph…

This is a slot that is perhaps better suited to those with higher bankrolls, as the minimum bet is £0.40 (£0.01 per payline), which is quite a lot higher than most other slots out there. The most that can be bet is a total of £200 (£5 per payline). This means that, when playing at the highest stakes, the most that can be won per payline is £3,750. It should also be mentioned that American Dad is a low variance slot. This means that wins spin into view very frequently, but they are mostly small wins, that simply keep your bankroll ticking over. The RTP of this slot is 96.10%, which is about average in the online slots world.

American Dad has an absolutely huge number of bonus features, however it’s perhaps best to start with the simplest of them: the wild symbol. This is represented by the Roger symbol, and it can substitute for most other symbols on the reels. Remember that it is also the jackpot symbol, so you’ll want to see it spinning in on the reels as often as possible!

When it comes to the other bonus games, the symbol to look out for is the Schmooblydong Wheel. If you can get this on the first and third reels, you will win one of five different free respin features, while getting it on reels one, three and five will lead to free spins. Explaining the features is quite complicated though, so make sure you’re concentrating…

The characters each have their own bonuses to offer. For example, five of Roger on the symbols at once gets players a multiplier. The value of the multiplier is based on how much a player bet on the spin that resulted in three Rogers.

The next feature is Roger’s Random Wilds, which sees Roger having too much to drink, and then vomiting on the reels. You will receive wild symbols wherever his vomit happens to land. The number displayed on the Schmooblydong Wheel on the third reel dictates how many wilds you will receive.

Next is Francine’s Holy Grail, and this game essentially sees you trying to help Klaus look directly up Francine’s skirt. The number displayed on the Schmooblydong Wheel on reel three determines how many Klaus symbols on are the reels, and if a Francine symbol lands on a position featuring Klaus, she will grow to become an expanding wild symbol.

Then there’s Hayley’s Progressive Multiplier, where Hayley attempts to collect signatures. Every time she receives a signature, your multiplier will grow. The starting value of your multiplier is determined by the value shown on the Schmooblydong Wheel on the third reel.

Wheels and the Legman

Finally, there’s Wheels and the Legman, which sees Roger pushing Steve across the screen in a wheelchair, dropping wilds as they go. The number of wilds you’ll get is, once again, determined by the value shown on the Schmooblydong Wheel on the third reel.

On the first reel players will see the character whose bonus feature they will be experiencing. On the second reel players will get something that powers up their bonus. The third reel determines the number of free spins a player gets.

All of these bonuses make American Dad a profitable slot machine game for many players.

Family Guy might not look too impressive when you first start playing, however everyone should see what an exciting online slot this is when they start to spin the reels. The prizes can be really large and the humour from the TV show only adds to the enjoyment, however it’s the bonus games that really make this slot from Playtech one that’s definitely worth playing! 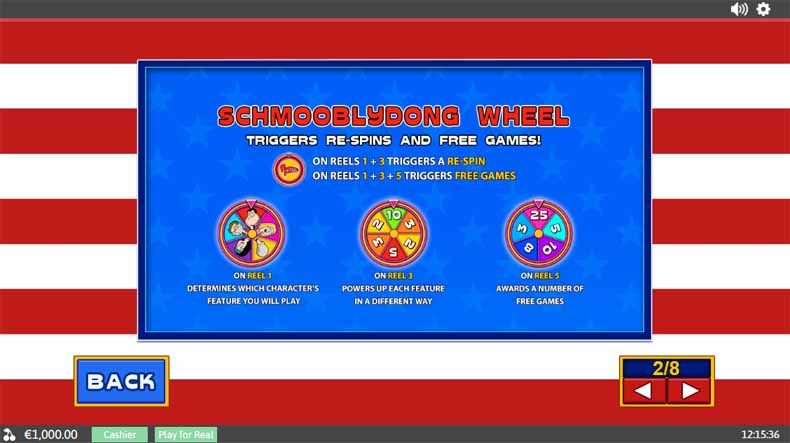 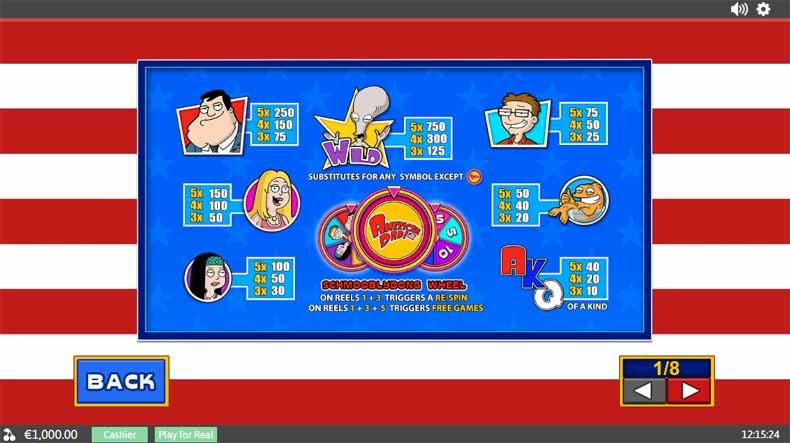