There are many oriental themed slot machine games, but none quite like Asian Attraction. Based on a Geisha woman, the game gives players a glimpse into the Asian culture and customs.

The graphics used in this game contain classic Asian images that have attracted many of the country’s residents to online gambling. The backdrop of the game features a silky surface of gold and light blue. Everything about the graphics reflects life in Asia.

Care was taken when designing every one of the game symbols seen on the reels. Where most slot machines simply use playing cards as their standard symbols, Asian Attraction takes it a step further and designed the playing cards to look as if they were hand stitched. A lotus blossom, popular in the culture, is used as the game’s scatter symbol while the game’s logo serves as the wild symbol.

A quartet of Geishas make up the most commonly seen symbols in the game. Each Geisha has a frame surrounding her face. Frames are made from platinum, silver, gold or bronze, each of which are worth a different amount. If players get five of the Geisha with the diamond frame around her face they win 25 times the amount they bet on that spin.

Players should keep an eye on the middle of the third reel, as if one of the Geishas lands there, the frame surrounding them is upgraded. For example, if a bronze Geisha lands in the middle of the reel she is promoted to a silver frame, helping players win more money. Anytime a Geisha woman is upgraded players earn more free spins. The highest number of free spins a player can get per bonus round is 16.

With exciting free spins and charming symbols, Asian Attraction is a game that many players have embraced enthusiastically. Its worldwide popularity has brought more attention to and understanding of the Asian culture.

A new generation of players is learning what a Geisha is and what she represents. This game can go a long way in educating people and entertaining them at the same time.

Once a player has tried this game it is very hard to walk away from it. Watching the game is as fascinating as playing it. With high quality graphics and a beautiful soundtrack the game is a hit with players of all ages and from many different cultures.

Players may find a new appreciation for Asian Attraction after they have been introduced to it. The features of the game are more exciting than many other slot machines and the game is perfect for anyone who wants to give themselves a stimulating and entertaining experience. Asian Attraction has opened the door for more Oriental themed games to be created. Similar slot games include Asian Beauty. 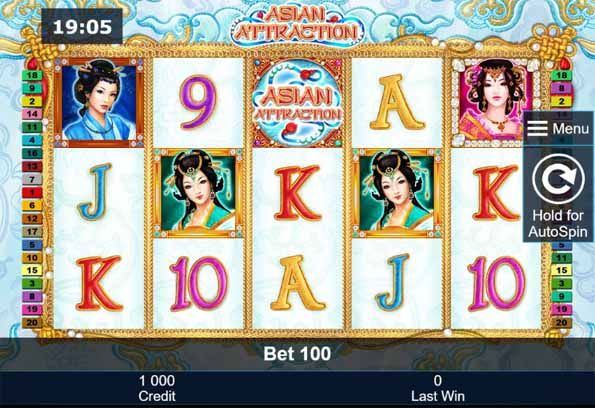 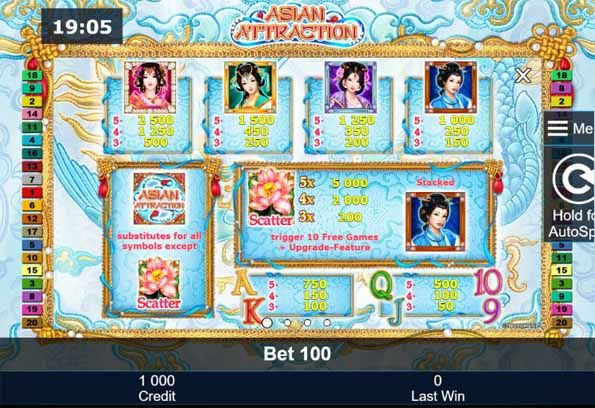