Play Batman and the Riddler Riches Slot for free 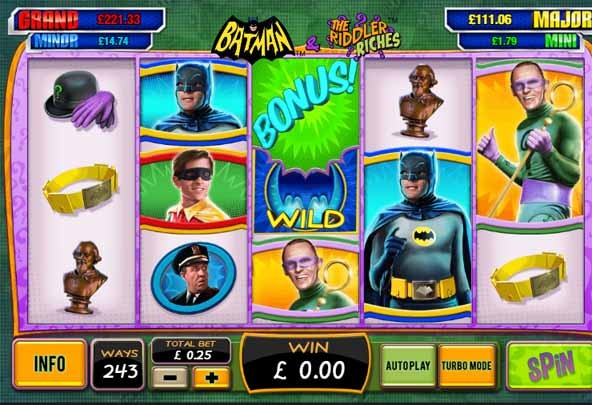 The series of online slot machine games by DC Comics includes Batman & the Riddler Riches. The series of retro Batman slots from Playtech has become really popular recently, as fans of the 1960s TV show spin the reels to relive their days sat in front of the TV, watching their favourite crimefighting super hero. This incarnation sees the Caped Crusader taking on one of his most famous enemies, as he goes head-to-head with the Riddler. With a fun theme and some fantastic graphics, this is a slot that pretty much every player should really enjoy.

The graphics and animation used in the game are reminiscent of the old Batman comic books. The game’s symbols are characters from the comics such as Batman, Robin, the Riddler, and the Gotham City Chief of Police. Other symbols in the game include Batman’s gloves, hat and belt as well as a statue. Batman is the game’s wild symbol and only appears on the second, third and fourth reels.

One of the features of this game is the Collapsing Reel feature. Any time a player gets a combination of symbols that leads to a win the winning symbols are taken off the reels and replaced with different symbols. This continues for as long as winning combinations of symbols are achieved.

There’s so much to say about this slot, but the first place to start is with the gameplay. Unlike the other Batman games in the series, this slot takes a more familiar form, with five reels, all of which are three symbols high. This makes this a really easy slot to play, as there are no extra rules or quirks you’ll need to learn about before you spin the reels. Surprisingly for an online slot, the music is also quite good, and adds an even more retro feeling to the entire playing experience.

Batman & The Riddler Riches has a grand total of 243 different ways to win. This is made possible by the fact that there aren’t any paylines at this slot – instead, you just have to line up three or more identical symbols on consecutive reels, starting with the first reel. You always have to use the 243 different ways to win, but you can alter the amount you bet before each spin. The minimum bet at this online slot is £0.25, while the maximum bet is £60. If you want to play faster, you can always enable the Autoplay feature, or alternatively use the Turbo Mode.

But what about the prizes? Well, the top prize you can win during the base game is 500x your bet, and this happens when you get five Riddler symbols on the reels. Batman and Robin are also high paying symbols at this game. The biggest prizes are found when you activate the progressive jackpot game at this slot though, and you can find out more about how to win one of these progressive jackpots in the next section of this Batman & The Riddler Riches review.

There are quite a few different bonus features to be found at Batman & The Riddler Riches, and the first is the wild symbol. This is just a standard wild symbol, meaning that there are no multipliers or other special features attached to it, however it should still prove useful throughout the game.

There’s then the Mystery Spins bonus, which can be triggered randomly on any spin during the base game. The feature will start with the Riddler adding a number of special symbols to the reels, and these special symbols will then transform into the same symbol. This brings the possibility of you winning some absolutely massive sums of money.

The main bonus to mention is the Batman vs. The Riddler Bonus Wheel, and this bonus is activated by getting three Bonus symbols anywhere on the first, second and third reels. When this happens, you’ll go to a bonus wheel, which will be spun to determine which of the three different bonuses you are granted, all of which can lead to some really nice prizes.

The first of the bonuses is the Sticky Wild Free Games, and this will see you given a number of free spins. These aren’t just standard free spins though, as they feature Sticky Wilds, which stay attached to the reels for a few spins. This increased number of wild symbols on the reels means that you’ll have an increased chance of spinning in some nice winning combinations.

The second bonus that can be won using the Batman vs. The Riddler Bonus Wheel is Multiplier Free Games. In this bonus, you’ll get a multiplier added to a number of your winning combinations, which could lead to some nice prizes.

The final of the three bonuses you could get is The Riddler Box Bonus. This is a simple picking game, where you have to click on different boxes, revealing cash prizes. When you manage to match three identical cash amounts, you will win that amount of money. It’s a simple concept, but one that can lead to a large addition to your online casino bankroll!

Another exciting feature of the game is the Mystery Spins. This can be triggered at any time during regular gameplay. Mystery symbols are added to the reels by the Riddler and become symbols that lead to winning combinations.

The appearance of the game’s bonus symbol on the first, second and third reels after one spin gives players the opportunity to spin the Batman vs The Riddler Bonus Wheel. Players then spin the wheel and get one of three features inspired by The Riddler. 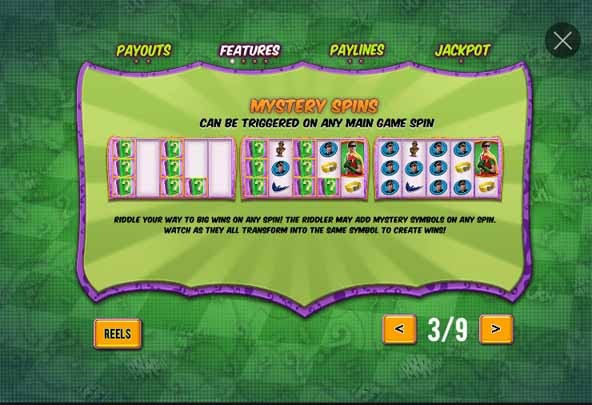 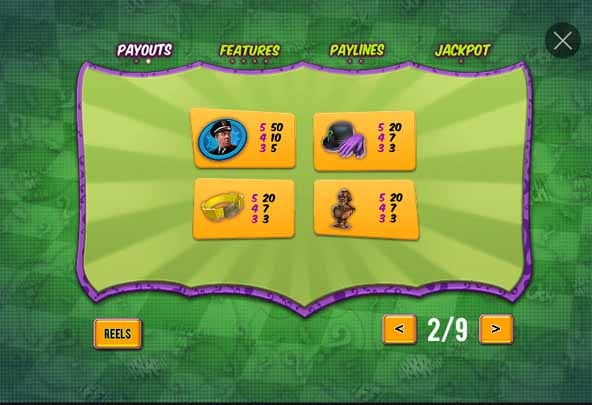 Packed with three different bonus features for players to benefit from, the Batman and the Riddler Riches Slot really packs a punch. The versus mode bonus round has proved to be a popular addition within this Batman slot series.

Once again, Playtech have managed to create a fantastic retro slot, based on one of the world’s favourite super heroes. Batman & The Riddler Riches is the perfect place to start for those looking to play the Playtech series of Batman games, as it has the easiest gameplay, and doesn’t feature any unusual layouts or rules. If you like this game, don’t forget to check out the other games in the DC Comics series from Playtech, as they are all equally as enjoyable.