Baywatch is one of the most iconic TV shows of all time, loved and loathed in equal measures by those of a certain age. Even if you missed the Baywatch boom first time around, you can still catch up with the show in its latest incarnation – the Baywatch movie, starring Dwayne “The Rock” Johnson and Zac Efron. The film didn’t go down too well with critics, however you’ll be glad to know that the slot is much more entertaining, while also giving you the chance to win some nice sums of money. If you like the idea of playing this slot, why not read through our comprehensive Baywatch slot review below?

This is actually the second Baywatch slot, as Playtech have previously created a slot with the same theme. The new IGT slot is certainly a simpler affair, with pretty basic graphics and simple gameplay. This isn’t necessarily a bad thing though, as many people are looking for simpler games to play, not the complex 3D slots often created by software producers nowadays. Despite being reasonably simple, you’ll still find the show’s main characters on the reels, including Mitch and CJ.

Baywatch is a slot with five reels and 15 fixed paylines. This is clearly not a huge number of paylines, and this might put a few people off playing. The fact that the paylines are fixed means that you have to play all 15 on every spin, which shouldn’t be a problem, as more paylines lead to more chance of you spinning in a winning combination. It is possible to change the amount you bet per spin though, as you’ll see in the next paragraph of this Baywatch slot review.

To change the amount you bet per spin, you simply need to adjust the “Coin Value” settings – just click the plus and minus buttons to increase and decrease the bet amounts. The minimum total bet is just £0.25, which should be low enough for lower stakes gamblers, while the maximum bet is a staggering £750. The more money you bet, the more you could potentially win, as is the case with most online slots. Please don’t bet more than you can afford to lose though.

The last thing to look at in this section is the prizes, and these aren’t as large as those found at some other slots. The highest possible win per payline at this slot is 250x your bet, which happens when you manage to get the best combination while the Teamwork feature is active. This slot is all about small but regular wins though, as it’s a low volatility game – this is great for some gamblers, but not ideal for others. The RTP of this slot can vary, and it ranges from 92.54% through to 96.25%.

Despite being quite a basic slot, there are still some really enjoyable bonus features, and these can lead to some sizable wins. The first special symbol to mention is the wild symbol, which is represented on the reels by the wave and appears on reels two, three and four. As with most wild symbols, this symbol can substitute for most other symbols on the reels and help you create some winning combinations. Wild symbols at this slot don’t have multipliers attached to them, which might disappoint some.

There’s also a random bonus feature involving the wild symbols, and it’s called Tidal Wilds. When a wild symbol spins into view, it can expand to cover the entire reel, which clearly gives you a better chance of winning a prize. What’s more, the expanded symbol can then expand horizontally to cover other reels, and you can potentially get three entire reels filled with wild symbols.

There’s also another random feature at this slot, called the Teamwork feature. This sees the lifeguards combining to bring bigger wins. On any spin, a male lifeguard and a female lifeguard can combine to make a new symbol, and this symbol will have an enhanced prize attached to it. Getting five enhanced symbols on a payline will lead to you winning the jackpot at this online slot machine, which is worth 250x your bet.

The main bonus feature at this online slot is the free spins, and these are started when you manage to get three Bonus symbols anywhere on reels two, three and four. Triggering the free spins will see you awarded an instant cash prize worth 2x your bet, however the big prizes should come when the free spins start. You’ve got a couple of decisions to make before the free spins begin though, as you’ll need to choose one male character and one female character. You’ll be able to choose from characters offering more free spins, or characters with more stacked symbols on the reels. It’s entirely up to you when it comes to the combination you pick.

Once you’ve chosen your characters, you’ll find out exactly how many free spins you’ve been awarded. The free spins will then begin, and the free spins can have a couple of differences when compared to standard spins. Firstly, you’ll find stacked symbols on the reels, providing you picked a character offering this. Secondly, you’ll find that the Teamwork feature is active on every spin, which increases your chances of winning big prizes considerably.

Baywatch certainly isn’t the most complex slot around, and it also won’t win any awards when it comes to the graphics. Despite this though, Baywatch is a really entertaining online slot, especially if you were a fan of the TV show. The main reason for this entertainment is the bonus features, which are quite innovative and can also lead to some nice prizes. If you think that the Baywatch slot sounds good, why not head to one of our recommended casinos and start playing it today? 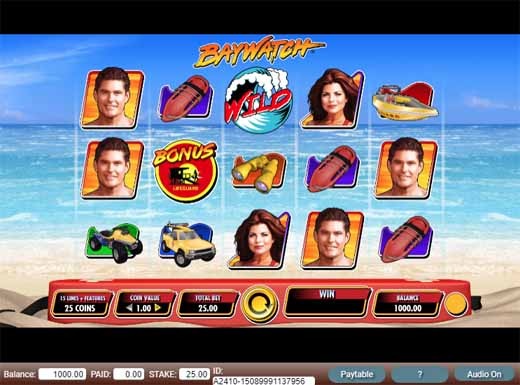 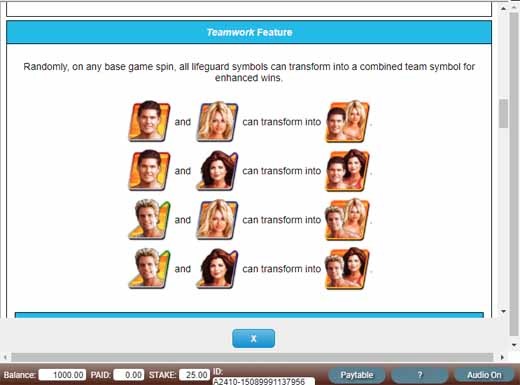