With vampires being a common theme for today’s slot machine games, it is not surprising that Blood Suckers II was released by NetEnt. The sequel to the original Blood Suckers, it continues the vampire’s story using 3D graphics and a blood curdling soundtrack.

Fans of the movie Underworld will notice that the game reminds them of it. The main character in Blood Suckers II is Amelia, who is meant to bear a resemblance to Underworld’s Selene. Both characters were humans and then became vampires.

The premise of the game is that Amelia is embarking on a treasure hunt at a vampire castleto find what her ancestors hid years ago. Amelia is always watching players, as she stands off to the side of the reels during the game. Armed with a crossbow, she stands prepared to shoot any beasts that come her way, much the way her own ancestors were targeted by vampire hunters. Her goal is to battle the demon that is holding her ancestor’s treasures in his possession.

All of the symbols used in the game are related to its theme. This includes Amelia’s family crest, red roses,a woman who is half bat, an unidentified blonde man, a master vampire and a demon vampire. Players will want to pay close attention to the family crest because, as the game’s highest value and wild symbol, it can help them win a jackpot. The symbols with the second and third highest value are the red roses and the master vampire, respectively.

As the wild symbol the family crest replaces the other symbols on the reels, which can lead to more winnings. When at least three of the scatter symbol appears on the reels in a single spin players get 10 spins for free. They can be retriggered at any time during the free spins round and the amount of a player’s winnings in this round are always tripled.

Players should be on the lookout for three, four or five of the bonus symbols to land on the reels in one spin. When they do, the bonus game is triggered. It begins by taking players to a new screen showing a secret chamber. In the chamber are several coffins and players click on the coffins of their choice. If they uncover three of the scatter symbols they get 10 free spins. They may also uncover a key that advances them to the next level of the game. Players that make it up to the fifth and final level will win 40 times the amount of their bet.

This bonus round continues and players get to keep clicking on coffins until they click on the one that contains a demon. The appearance of the demon signals the end of this bonus game.

In total, there are four bonus features in Bloodsuckers II. While two are triggered by a certain combination of symbols on the reels, as described above, the other two bonus features are randomly triggered during gameplay. These features are referred to as the scatter shot and the bonus shot. During the scatter shot bonus an extra scatter symbol appears on the reels and triggers 10 free spins known as the Blood Rose spins. During the bonus shot an extra Overlay bonus symbol appears on the reels. The bonus shot symbols only ever appear on the first, second and third reels.

Blood Suckers II has become so popular that it is now available for play on mobile devices. Compatible with Android and Apple devices, the mobile version of the game is just as impressive as its desktop version. Players can enjoy the same 3D graphics and fitting soundtrack they have become accustomed to.

As a sequel to the original, Bloodsuckers II was highly anticipated even before its release. Fans of the original game were crying out for a sequel and NetEnt answered their pleas for more.

Though Bloodsuckers II is one of the newer online slot machines it has already found a fanbase that extends all over the world. Many of the top online and mobile casinos now offer Bloodsuckers II in their game selections. In most cases, players can try the game for free before betting real money on it.

With vampires being such a popular theme in slot machine games, there may be more follow ups in the Blood Suckers series. As fans and players continue to enjoy the genre the industry will likely respond to their enjoyment of it. This means there is likely to be a bright future for vampire themed games.

Player reviews of Blood Suckers II have been overwhelmingly positive in the short time the game has been available online. Even those who never played the original game are enjoying its sequel. The high quality graphics and gameplay has attracted many players that see it as a marked improvement over the original. 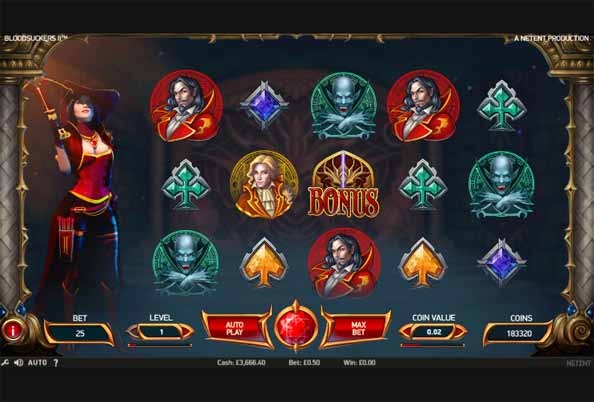 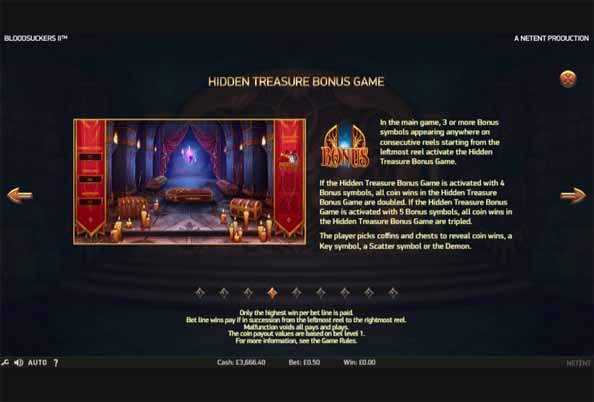