If you’ve been playing slot machines for a while, you’ve probably seen the Book of Ra series from the people over at Novomatic. The latest entry in the series is Book of Ra 6 Deluxe, and it is also the best version of the game released thus far by Novomatic. Sure, it might not have the same fancy bonus features as some slots, and the audio might be a little cliché, however there can be no doubting the fact that every spin is an exciting one, and that the prizes you could win are absolutely massive. So, why not read through our Book of Ra 6 Deluxe review and see whether this could be the perfect online slot for you?

Book of Ra 6 Deluxe looks fantastic – in fact, it is probably the best Novomatic slot around when it comes to graphics. The reels are bright and colourful, the symbols are well designed, and the backdrop is a really good looking one. There is one criticism though – and it’s one we often level at online slots – and this is the fact that they’ve relied very heavily on 10-A symbols. If only they’d decided to create unique symbols for every position on the reels, we would have been able to give them top marks for the overall look of this game.

This is a slot with five or six reels, depending on whether you activate the bonus bet or not – but more on this in the next section of this review. Regardless of whether you have five or six reels active, you’ll still only have a maximum of 10 paylines on the reels, which isn’t an amount that will impress too many gamblers. It is possible to reduce the number of paylines at this slot, but why would you want to lower your chances of spinning in a winning combination?

Altering the amount of money you bet is really easy, and it is done by clicking the plus and minus arrows to each side of the Bet/Line total. The minimum bet per payline is two coins, while the maximum is a massive 10,000 coins. Reducing the number of paylines will also bring your overall bet down, however we’d recommend playing the maximum number, and adjusting your bet per payline instead.

So, how much money can you win when you play this slot? Well, if you have five reels active, the top prize is worth 2,500x your bet per payline, while those with six active paylines could find themselves winning 7,500x their bet per payline. The jackpot is awarded when you manage to get five/six archaeologist symbols across an active payline. Other high paying symbols at this game include the scatter symbol and the mummy.

There are some slots out there that offer loads of different bonuses, and there are others that prefer to rely on the base game for excitement. Book of Ra 6 Deluxe certainly falls into the latter category, as the features are quite basic, and they don’t activate too often. This doesn’t have to be a bad thing though – some people don’t want to be distracted by bonus features, and instead want to enjoy slots in the way they used to be played!

The first feature to mention isn’t one that appears on the reels, but is instead one you can activate at any time. In the top-right of the screen, you’ll see an icon, and this tells you whether reel six is activated or not. Activating reel six will see your bet being doubled, however the potential prizes will get considerably larger. Please be aware that the RTP of this slot does decrease when you activate reel six though, which is why most experienced gamblers avoid it.

The first of the game’s actual bonus features to mention is the wild symbol, and this is represented by the magical Book of Ra itself. Because it is a wild symbol, it can substitute for other symbols on the reels and help you to create some really nice winning combinations. This symbol also has another function though, as you’ll see in the next paragraph.

The Book of Ra symbol is also the scatter symbol at this slot, therefore meaning you’ll win a prize when three or more of these symbols land anywhere on the reels. What’s more, it is also the key to activating this slot’s main bonus feature. When you get three or more scatters anywhere on the reels, you will activate the free spins – you receive 10 in total, and while they are active, you’ll have a special expanding symbol on the reels. It’s not the most inventive free spins bonus round ever created, but it can bring some nice prizes.

Finally, there is a Gamble feature at this slot, which can be used after spinning in a prize. Correctly predict the colour of the next card and you’ll double your prize, but guess incorrectly and you’ll lose everything you’ve just won.

Book of Ra 6 Deluxe is a pretty simple slot, but that’s okay. Slots don’t need to have loads of bonus features and fancy themes to be good, as they can reach a high standard simply by doing the basics right, namely offering big prizes and exciting gameplay. So, if you’re looking for a simple slot offering some massive potential prizes, we’d definitely recommend heading to one of our recommended Novomatic casinos and playing Book of Ra 6 Deluxe today. 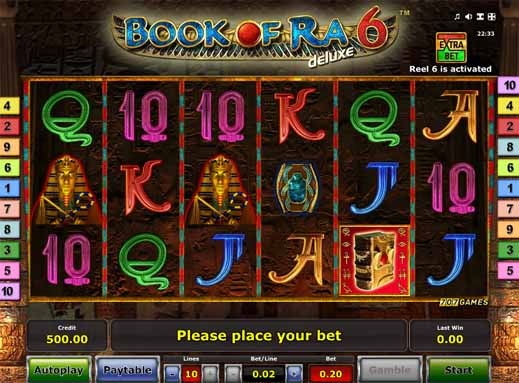 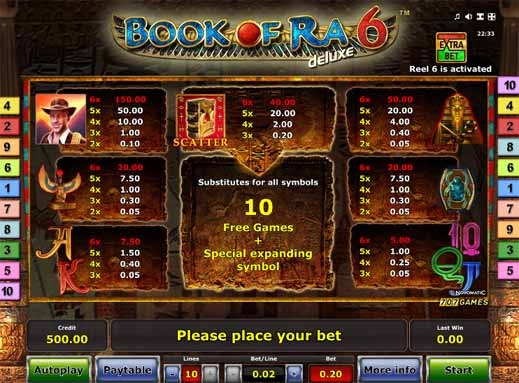