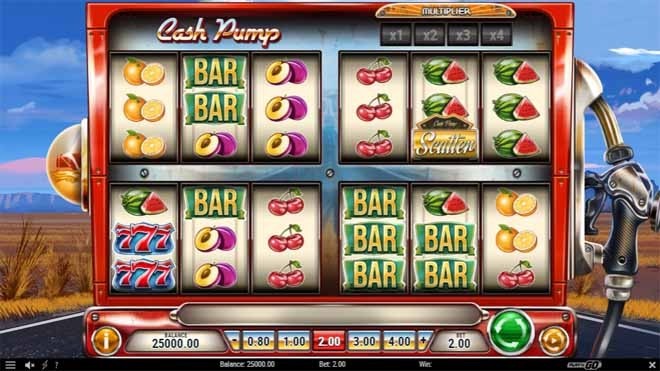 Those who seek out online slots that don’t resemble a typical slot will find that Cash Pump is what they are looking for. The game’s set up means that there are four individual screens, each with their own reels. This greatly increases the level of excitement the game offers and ups the stakes on the amount of money players can win. The game is also a little more exciting thanks to the guitar music that plays in the background.

Cash Pump is a racing themed game set on a deserted highway. The reels are held within a gas pumping station, lending authenticity to the game. However, even though this is a modern slot, the symbols on the reels are those used in classic slots, before they evolved to what they are today. This means the symbols on the reels are cherries, watermelons, plums, and oranges. The two most valuable symbols in the game are also classics; those are the bars and triple sevens. The only unique symbols on the reels, that reflects the game’s theme, are the scatter and wild symbols While the scatter is a gas pump, the wild is a helmet clad driver, and players will notice he is confined to the middle reel. The wild can become a stacked wild during certain points in the game.

Because of the unique way the game’s screen is set up, with four sets of reels, the appearance of the stacked wild on one set means that it shows up on the other sets of reels too. Player can look at the right, top side of the game screen to see the value of the multiplier that is randomly awarded.

Players can also win free spins in Cash Pump. In order to trigger this bonus, the scatter symbol has to appear on the center reel of one grid. When that happens, it automatically appears in the other three as well. This triggers seven free spins.

While free spins are being played, more wild symbols appear on the reels. If players get an additional four of the scatter symbol on the reels at once they get five more free spins and a multiplier.