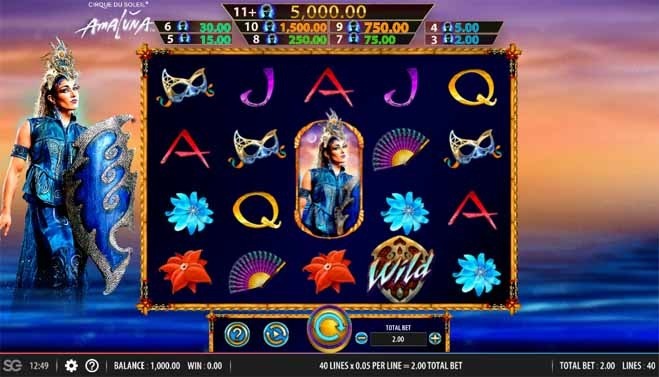 In this game, Amaluna’s story is told. It is the story of a group of men and goddesses that are forced to live on and island due to an unfortunate shipwreck.

This Cirque Du Soleil game includes colorful graphics. Even the symbols on the reels are decked out in various colors. The two most prominent symbols in the game are the goddesses. They wear outfits of red and blue. These colors are used throughout the game, as they give life to the flower symbols. The colorful logo for the show is the game’s scatter symbol. The goddesses’ shield is the wild symbol in the game. There are also colorful peacock feathers used as bonus symbols.

When players get three bonus symbols on the reels at once, they trigger the bonus wheel feature. The wheel has eight wedges, each with a different value on it. Half of the wedges are worth a certain number of coins. The other half of them reward players with additional bonus features. Those bonus features are:

The other bonuses on the wheel are Win Spin and Re-spin. Landing on a res-pin or win spin gets players another spin of the bonus wheel. This can lead to winning another bonus. If players don’t land on one of these bonuses they land on the coin wedges. This allows them to spin an additional wheel that awards a multiplier.

Players also look forward to the Moon Goddess Free Spins. Though players begin with a single multiplier for their 10 spins, if bonus moon symbols appear on the reels, the value of the multiplier may increase. If it doesn’t, a player will win additional free spins. After the bonus symbol has helped players win more, the symbol is transformed into a wild.

Unlike Moon Goddess Free Spins, Meteor Wilds Free Spins won’t be re-triggered during the feature. However, this time players get 15 spins for free. Above the reels players will see Cirque Du Soleil performers. They will then get wild symbols added to the reels randomly.

Also, at the top of the game screen players will see a place for the progressive jackpots. If players get enough of the scatter symbol on the reels at once, they win one of the progressives. 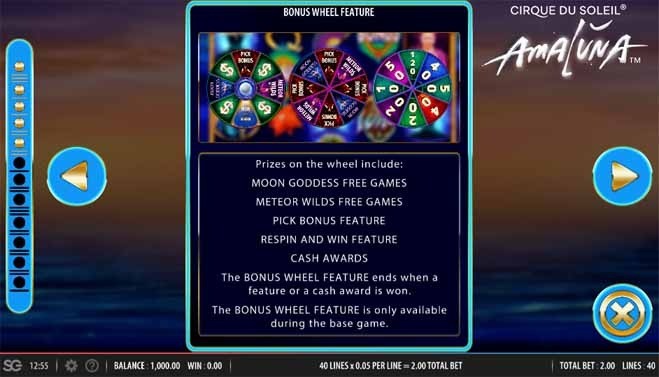 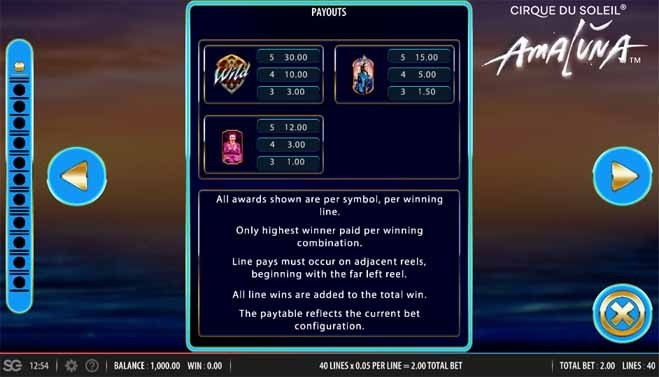 Whether a player is a fan of Cirque Du Soleil or not, they will find entertainment value in this game. The bonus features are enough to get most players interested. Combine this with an upbeat soundtrack, and Amaluna is appealing to many. The game takes a widely known theme and turns it into something that any player can enjoy the experience of, each time they try it.