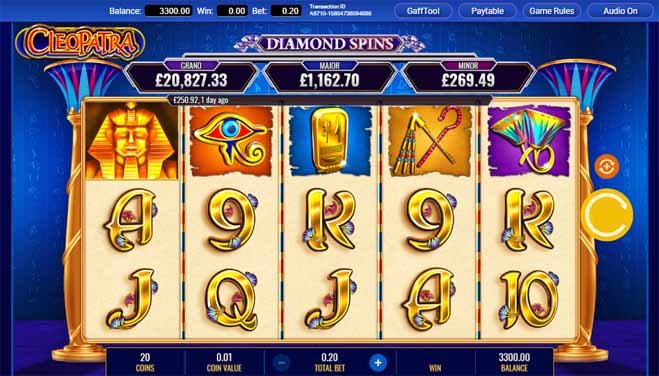 Even the standard playing card symbols on the reels are surrounded with gold. The themed symbols players will see include a black cat statue, Eye of the Horus, a gold ingot, and a staff and crook. Not surprisingly, the most valuable symbol in the game is Cleopatra. Getting multiple Cleopatra symbols on the reels in one spin means players win a significant cash prize. In addition, Cleopatra serves as the wild symbol in the game. A wild Cleopatra symbol in a winning combination doubles the amount of prize money players get. A sphinx serves as the game’s scatter symbol.

Players that get between three and five of the sphinx scatter symbol on the reels at once win a large cash prize and free spins. Three scatters triples a player’s winnings, while four scatters gives them five times the winnings and five scatters give them 20 times the winnings. Once the prize money has been awarded the 15 free spins begin. The amount of money players win on free spins is tripled. The free spins round may be re-triggered at any time while it is being played. The luckiest players can get as many as 180 spins for free, though this is rare.

In addition to the free spins bonus, Cleopatra Diamond Spins also includes progressive jackpots. To have chance at winning one, players must get five of the sparkling diamond symbol on the reels at once. This triggers a series of three re-spins. Whenever a diamond lands on the reels during this bonus it becomes a locked symbol. Players get three more re-spins with every instance of the blue, green, purple, or red diamonds on the reels. If the special green diamond lands on the reels players win the mini jackpot. The red diamond rewards winners with the maxi jackpot.