It’s not every day you get to experience a slot that’s out of this world. However, NetEnt have managed to offer just that with their title Cosmic Eclipse. If you’ve ever played Starburst by the same developers then you’ll be familiar with the graphics of the game as it’s along those lines. However, there’s a unique and mysterious black hole feature that can result in huge payouts if you get lucky. It may be a simple slot but there’s plenty of fun to be had. So make sure you strap yourself in and get ready to embark on the ride of your life!

Cosmic Eclipse is exactly what you’d expect from a game set in outer space. Beautiful planets, amazing galaxies, and glittering stars occupy the backdrop to the reels and you’ll be submerged into a psychedelic experience as you come to grips with colourful swirls. Symbols include 3 different coloured rocky planets – green, yellow, and orange, and also 3 space rocks in various shades of blue. As you get to grips with game you will notice a mysterious, eerie soundtrack that plays in the background.

There are 5 reels on Cosmic Eclipse, and 10 paylines which cannot be altered. There’s no questioning then that NetEnt have decided to make a simple slot that allows you to focus purely on the gameplay and not on the many ways you can win. This also keeps in line with the current trend of software developers seemingly more reluctant to let players reduce paylines. We reckon it’s because most gamers realise that reducing these will only damage your chances of winning anyway.

Playable from 10p to £100 per spin, Cosmic Eclipse will no doubt benefit the majority of gamers. Low-stake players won’t have to look far to find the minimum required, however the top end of high-rollers may be slightly aggrieved they cannot bet more than the maximum offered. To make your gaming a little easier, NetEnt have included an Auto Play feature that lets you spin up to 1000 times in a row, and also a Max Bet button which will let you wager £100 in one click.

But what can you actually win on Cosmic Eclipse? Well, the orange planet is the most lucrative in the base game and this will give you 600 coins for 5 across a payline. Other high-paying symbols include the yellow planet which will award 350 coins if you manage to find 5 across a payline, and the green planet which will grant you 150 coins. Obviously, the higher you bet, the bigger prizes you will win and if you hit the top combination with the highest amount, then you will be walking away £6,000 richer.

As we have mentioned earlier, Cosmic Eclipse is a relatively simple slot and there’s only one main feature that we can talk about. Most of the entertainment is sought from the base game but that will suit those players who prefer to do their gambling without too many distractions. Try looking out for the wild symbol which can appear randomly on any reel and will substitute for the highest possible winning combination on a payline. If this occurs then you’ll be guaranteed to get the best payout for that combination and this can happen quite frequently.

Another symbol worth keeping an eye out for is the bonus symbol and this comes in the form of a purple swirl. This will only appear on reel 5 but when it does, it will trigger the Black Hole feature. This bonus symbol will then turn active and all the wilds and active symbols will be collected and you will be awarded re-spins. On each spin, the winnings will be paid out and then all the wilds and active symbols will be collected, removed from the reels, and then you will spin again. When you have no more symbol to collect, or you have collected 15 or more, then this feature will finish and all the reels will be completely cleared. However, all the symbols that you have collected will be placed on the reels as active and this will guarantee a minimum of 1 winning combination.

Unfortunately, there are no other bonus features available on the game but you can expect to land the Black Hole feature quite often, which allows for regular wins. We’ve also found out that the maximum win for a single spin on this feature is an incredible 400 times your original bet! It’s obvious that NetEnt have gone for quality rather than quantity when they decided to make this game, and we’re not complaining.

Even though Cosmic Eclipse is a simple slot, the Black Hole feature does trigger quite frequently so you can expect decent regular payouts – and at least one guaranteed win every time. We’re also treated to a visual masterpiece like we are with most NetEnt titles, and it may be similar to popular hit Starburst, but there’s enough features to keep it unique. Overall, this is a thoroughly entertaining slot and if you prefer your gaming without too many distractions then it’s well worth giving it a chance. 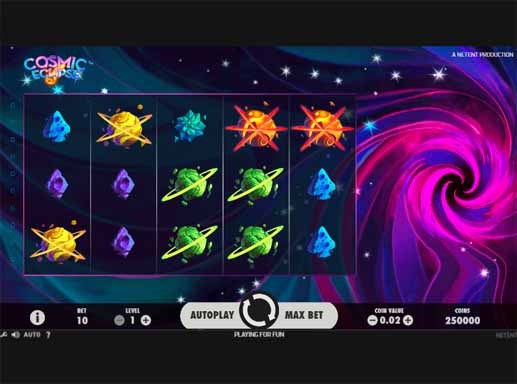 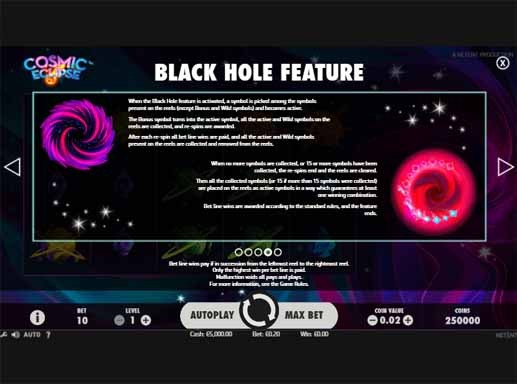