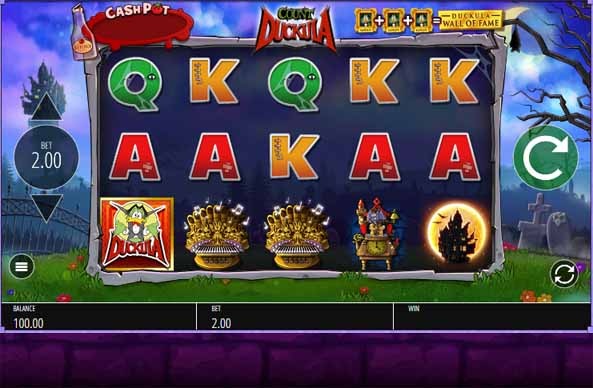 If you were a child in the 80s, you’ll almost certainly remember Count Duckula – the vegetarian vampire who used to delight children every week with his escapades on kids’ TV. Well, there’s no need to dig out your old VHS tapes of the show if you want to relive your youth, as you can now experience Count Duckula at an online casino, thanks to the new slot from the people over at Blueprint Gaming! Nostalgia isn’t the only reason to play this online slot though, as it has absolutely loads of fantastic features for you to enjoy – as you’ll find out when you read through the rest of this review!

Count Duckula is a slot with five reels and 20 different paylines. These paylines are fixed, meaning that you have to play all of them on every spin. You can alter the amount you bet per spin though, with the minimum being 20p, and the maximum being a massive £500. This means that this slot is perfect for those with decent-sized account balances. The top prize during the base game is 500x the bet per line (total bet divided by twenty), meaning that the most that can be wonon a single payline during the base game when playing at the maximum stakes is £12,500.

As you might expect from the game, many of the symbols are inspired by the TV show. So, on the reels you’ll see Castle Duckula, Duckula’s crest and, of course, the star of the show himself, Count Duckula. Don’t worry if you’re expecting to see some of the show’s other stars though, such as Nanny, Igor and Doctor Von Goosewing, as they can be found during the bonus features – as you’ll see further down this page. The slot also features the standard J-A symbols which, as is the case with most online slots, are the lowest paying symbols in the game.

The bonus features at Count Duckula are some of the best around, and they are the main reason why this game is played by many people. In total, there are an amazing ten different bonus features, as well as wild symbols. The wild symbols are seen on the reels during the base game and are represented by a heart with a stake through it. They can substitute for most other symbols on the reels, however they unfortunately don’t have multipliers attached to them.

There are then four random bonuses, which can be triggered on any spin. The first is the Count Duckula Wilds bonus, which sees the Count walking onto the screen and turning multiple symbols into wilds. Then there’s the Nanny Colossal Spin bonus, which sees Nanny make an appearance. She will then create a massive 3×3 wild symbol on the reels. Next is the Igor Mystery Potion Bonus, which sees Igor walking onto the screen with a tray of potions, which he then drops. These potions will explode, leaving mystery symbols on the reels. These symbols are then revealed, and will all be exactly the same. Finally, there’s the Duckula’s Winged Winspin Bonus, during which Count Duckula calls his bats onto the screen. These bats will then remove symbols from the reels, and replace them with jackpot symbols.

There are yet more bonuses at this slot though, and they all stem from landing three of the Duckula portraits anywhere on the reels. When this happens, you will have to spin a reel, and this will determine which of the six different bonuses you are awarded. Some of the bonuses can be more profitable than others though, so if you don’t like the one you’ve been awarded, you can gamble and spin again, in the hope that a better one is selected. Even if the gamble fails, you’ll still be awarded a cash prize though. The different bonuses you can get at this slot are:

If you remember Count Duckula from your childhood, this slot will instantly bring back memories. If Count Duckula didn’t play a part in your formative years though, this slot will still be a huge amount of fun. The prizes are potentially huge and the graphics are good, however it’s the massive number of bonuses that really ensure that this slot is one of the best around. 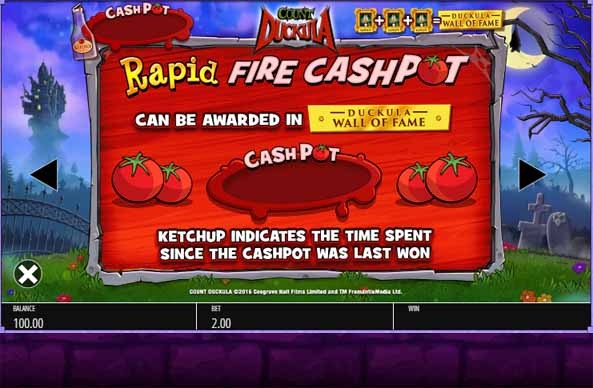 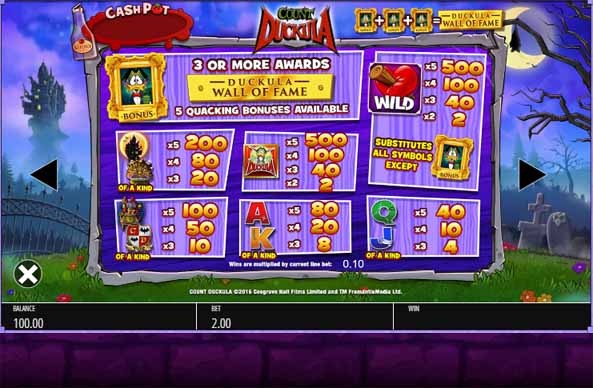