Grab your bat and strap on your pads, as Cricket Star is the perfect online slot for fans of the gentleman’s game! It’s produced by Microgaming, so you can be sure that it’s going to be an exciting game to play, and from the first moment this slot loads, you’ll feel like you’re at the crease in one of the cricketing world’s biggest venues, like Eden Gardens, Lords, or the Gabba. Even if you’re not a cricket fan, you’ll still enjoy every spin of the reels, thanks to the huge prizes on offer, as well as the fantastic bonus features.

There are five reels at this slot, which is the normal number found at video slots. There aren’t any actual paylines though – instead, there are 243 ways to win. This means that you simply have to get three or more identical symbols on consecutive reels, starting with the first reel, in order to win a cash prize. This is a really popular feature amongst online slots enthusiasts, so many will be really happy to see it at Cricket Star.

While no actual cricket stars appear in this slot, the symbols do feature some of the world’s biggest international teams, including India, Australia and Pakistan. All the symbols are unique, meaning that there are no standard 10-A symbols at this slot, and this is always a welcome sight, as it shows that the producers have really paid care and attention to the creation of this slot. The audio at this slot only enhances the excitement, however you can easily turn the sound off, it you find that it’s beginning to annoy you.

The most you can bet per spin at this online slot is £5, which isn’t really a huge amount when compared to other online slots out there. This means that higher stakes players probably won’t find this slot offers them what they want. The fact that the minimum bet is £0.50 also means that players who want to play at the lowest stakes might not be too keen on this game. So, it really is a slot for those looking to bet at mid-range levels.

Of all the symbols on the reels, the highest paying is the scatter symbol, and this is worth 625x your bet per payline when you manage to get five of them on the reels. You’ll also get free spins when you get three or more scatters, as you’ll see later in this Cricket Star review, meaning that you could win even more money! In fact, the jackpot at this slot is an amazing £525,000, which is much higher than the majority of other online slots out there. Other high-paying symbols include the Australian batsman and the Indian bowler.

Bonus features are always one of the most exciting aspects of a video slot, and this is certainly the case at Cricket Star. There are four different bonus features at this slot, and they are all exceedingly good ones. The first is the wild symbol – a symbol found at most online slots nowadays – and it is represented by the game’s logo. It acts in the same way as most wild symbols, substituting for other symbols and creating winning combinations. While other slots only have a few wild symbols on the reels, Cricket Star has 40 of them, and they come stacked on reels three, four and five. This means that they spin into view often.

Cricket Star also features the exciting Rolling Reels, which is a feature loved by many online slots players. But what exactly is it? Well, whenever you get a win, you’ll receive your prize. The winning symbols will then disappear from the reels, and be replaced by new symbols, therefore giving you the chance to win again. The feature keeps on going as long as you get new winning combinations.

Finally, there is the free spins feature, and this starts when you manage to get three or more scatter symbols anywhere on the reels. Three scatters will lead to 15 free spins, while four scatters will see you awarded 20 free spins. If you manage to get five scatters on the reels, you’ll receive a massive 25 free spins, as well as a huge instant cash prize! During the free spins, the Rolling Reels will remain active, and they will have multipliers attached to them. The more consecutive wins you get during the Rolling Reels feature, the higher the multiplier will become. It’s possible to get a massive 10x multiplier while this feature is active.

Cricket Star is an absolutely fantastic slot from Microgaming, but what else would you expect from this company? Of course, it’s cricket fans who will love this game most, however even those who aren’t fans of the game will enjoy spinning the reels. The bonus features are incredibly exciting, and can lead to some big prizes, while the gameplay is really enjoyable. All in all, this slot really has everything a slots fan could want, so why not spin the reels today at one of our recommended online casinos? 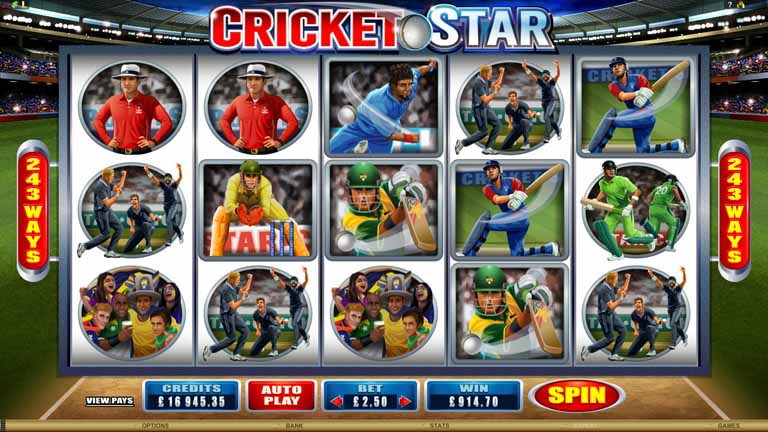 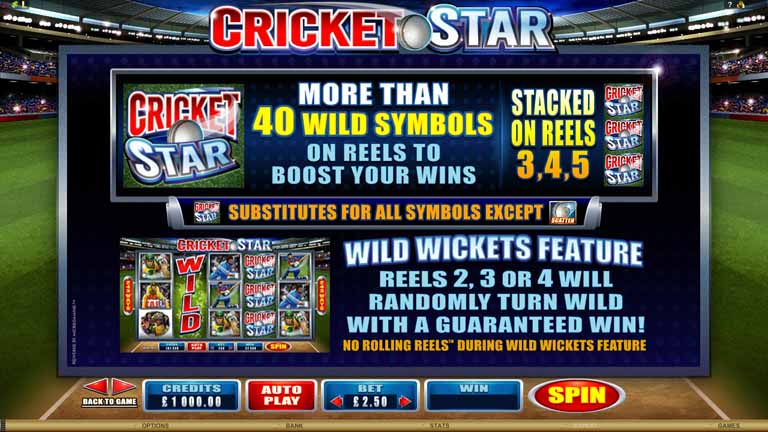