There’s probably a good chance that most of us were not around to remember the Art Deco era of the 1920s. However, Microgaming thankfully enables you to relive this period through their latest game, Deco Diamonds. This classic-looking fruit slot allows you to benefit from re-spins with sticky reels and the chance to win up to 2323 times your original stake if you’re lucky. There’s a completely unique feeling to the game that draws upon beautiful aesthetics from this wonderful stage in time. So take a read of our review and get ready to discover tons of surprises with Deco Diamonds!

Deco Diamonds no doubt has a classic feel to it, and you won’t be surprised to see that it resembles the glamour of the Art Deco era. There’s a nice mix between 1920 visuals and 3D style graphics, and symbols include cherries, watermelons, peaches, lemons, bells, 7s and diamonds. While you spin the curved reels, you’ll be greeted to a simple, purple background that will be great for those players who like games with a retro feel. There’s a jolly, joyful jingle that also plays in an attempt to match the excitement on screen.

Deco Diamonds consists of 5 reels and only 9 paylines that will definitely suit those who prefer their slots simple. Microgaming have opted against giving you the opportunity to lower these paylines but who would want less than 9 anyway? A lot of software developers have stopped giving players this option anymore because they have realised it’s only going to damage their chances of winning. But don’t worry – your entertainment won’t be limited and there’s still plenty of ways you can win big money!

Players will have the opportunity to spin from as little as 10p or as much as £50 per spin. Undoubtedly then, this is a slot for low and medium-stake gamers who will be more than happy with the amounts on offer. If you’re more of a high-roller then you may not be able to bet in the three-figure brackets that some games offer, but £50 is still a decent amount for one spin. Unfortunately, there are no options to make your gaming a little easier such as Max Bet and Auto Spin but this is due to the simple nature of the game.

But how much money will you be able to win from these beautiful-looking diamonds? Well, in the base game, the deco diamonds is the most lucrative symbol and finding 5 across a payline will award you with an incredible 1000 times your original stake. However, the standard diamond symbol is also worth looking out for as finding 5 of these will award you with 100 times your stake. The maximum you can win though is 2323 times your stake and this can be done through the bonus features which we will discuss now.

As we have already mentioned, Deco Diamonds is a simple slot and this means it isn’t blessed with abundances of bonus features. This isn’t a huge problem though and it will definitely suit players who prefer their gaming the way it’s supposed to be played and without too many distractions. There are only two features available but before we discuss them, we need to talk about the wild symbol. The Deco Diamond acts as the wild and this will substitute for all other symbols on the reels. On a lot of slots you will have a scatter that is usually your route to the bonus rounds, but on this game, the Deco Diamonds symbol is your path to glory.

Whenever 2 or more Deco Diamonds appear on the reels, you will be awarded a re-spin. All the reels containing this symbol will then be held while the others spin away. If you get 1 or more deco diamond symbol then you will get another spin and these will continue until no more are seen on the reels.

The next feature is called the Bonus Wheel feature and this is triggered straight after the re-spin rounds. There are 3 levels that you can access : Silver, Gold, and Diamond – and depending on whether you have 3, 4 or 5Deco Diamonds on the reels will determine what level you achieve. Each wheel has multiplier prizes on offer and you can even have the chance to level up to win bigger cash amounts. Landing on the diamond wheel could see you win prizes of up to 1000 times your total bet! After your spin, you will then be directed back to the base game.

Even though Deco Diamonds is a relatively simple slot, there’s still plenty of entertainment to be had, and huge prizes to be won. It’s very easy on the eye and the re-spins and bonus wheel features are a nice touch that can offer wins of up to 2323 times your stake if you manage to get lucky and land on the diamond level. Plus, there aren’t many games that focus on the Art Deco era so if you’re looking for something with a little originality, then Deco Diamonds could definitely be the right slot for you. 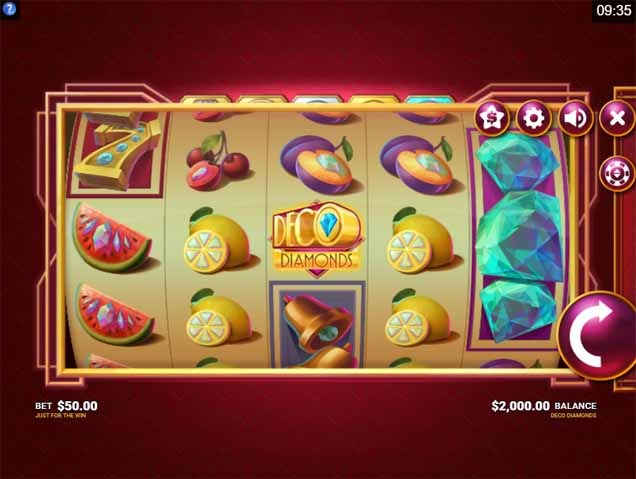 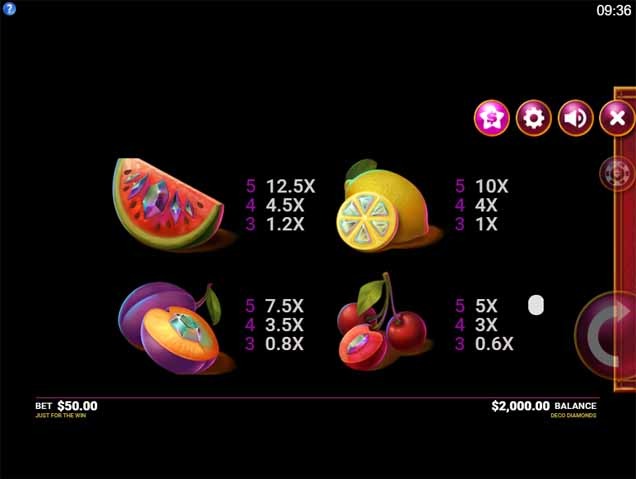