There seems to be a competition between slots producers nowadays, as they each look to outdo each other in terms of the number of paylines on offer. Some even offer hundreds of ways to win, making every spin an incredibly exciting one. Not many slots can compete with Dragon Champions though, the new online slot from Playtech, as this fantastic game has no fewer than 4,096 different ways to win! So, if you’re looking to play an exciting new online slot using a desktop or mobile, why not learn if Dragon Champions is the perfect choice for you by reading our detailed review?

When you load this Playtech game, you’ll immediately see why it can offer so many different paylines. It’s because the game has six reels, instead of the usual five, plus each reel contains four symbols. The graphics are exactly what you’d expect from Playtech, as they’ve clearly taken a long time to create them, and you’ll find everything from warriors through to dragons on the reels. The audio also isn’t ridiculously annoying, unlike some other slots, so this has to be seen as another bonus to playing this game!

As already mentioned, this slot has a massive 4,096 different ways to win. The game doesn’t really have paylines, as instead you just need to get matching symbols on consecutive reels, starting with the first reel. The number of ways to win can’t be changed, however you can alter the amount of money you bet. The minimum bet amount at this slot is £0.40, while the maximum bet amount is £80. Therefore, Dragon Champions is a slot aimed primarily at mid-level gamblers.

Finally for this section, we need to look at the prizes. The biggest prizes at this slot come when you manage to get stacked dragon symbols across multiple reels, and doing so can lead to you winning thousands and thousands of pounds. Be warned though: this is an extremely volatile slot, so you might have to wait a while to get a win. When a win does spin into view though, it is often an extremely sizeable one. So, be patient and stick with this slot, even if you don’t manage to scoop a massive prize straightaway.

Dragon Champions hasn’t been released quite yet, however it should be available at most Playtech online casinos soon. If you’re looking for a similar slot to play in the meantime, we’d recommend spinning the reels of Buffalo Blitz – another slot from Playtech with high volatility and a similar style of gameplay.

Despite having 4,096 different ways to win, Dragon Champions is a slot that keeps things simple. This is achieved by not having loads of different bonus features. Instead, there are only three bonuses to mention, and the first of these is the wild symbol. This wild symbol really isn’t anything special though – instead, it’s just a standard wild, meaning it can substitute for most other symbols, but doesn’t have any kind of multiplier attached to it. The wild symbol spins into view fairly regularly, meaning that it should help you win a considerable amount of cash when you play.

The next bonus feature to mention is called the Dragonfire feature. This feature activates completely randomly, after any spin. After the spin, wins are paid as normal, however a symbol is then selected and edged in blue fire. This symbol will then expand one position horizontally or vertically, and you’ll therefore get the chance to make another nice winning combination. The Dragonfire feature is active during both the standard game and the free spins, however it has an added feature during the free spins, as you’ll see below.

But what is the extra feature that makes the free spins so good? Well, it is the Dragonfire feature, which is enhanced during the free spins. Instead of affecting any symbol, it can only affect the red dragon symbol during free spins, meaning that you’ll find the game’s highest value symbol regularly expanding on the reels – something that should lead to some pretty impressive prizes! Don’t expect to start the free spins feature too often though – remember, this is a highly volatile slot, so you’ll have to wait a while to get the big prizes on offer during free spins.

Dragon Champions doesn’t offer much new in the way of theme or bonus features, but it does offer one thing that most other slots can’t – 4,096 different ways to win. This massive amount of ways to win ensures every spin of the reels is an exciting one. The high volatility of this game might put some people off, however it will be perfect for others – it really depends what type of player you happen to be. Dragon Champions will be released at most Playtech online casinos soon. 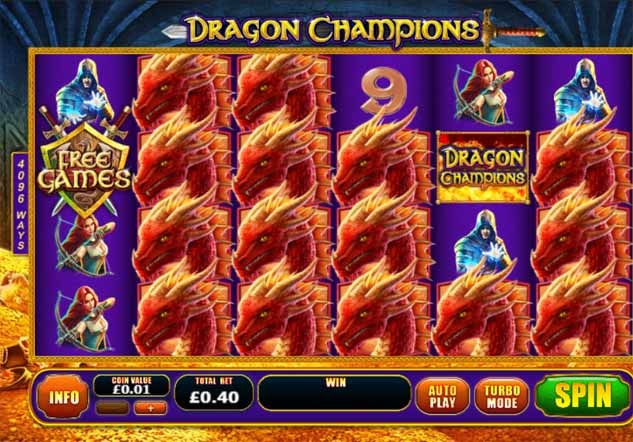 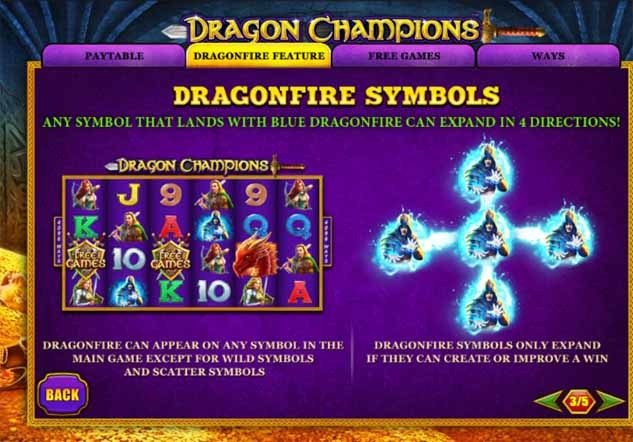