Get ready to fight for every win when you play Eliminators, the slot from Playtech based on the exciting world of mixed martial arts. You see all kinds of fighters on the reels, and if you can defeat them all you’ll find yourself winning a massive prize. So, why not find out exactly what we think of this slot by reading through the comprehensive Eliminators online slot machine review below?

The layout of Eliminators is a standard one, therefore meaning that you’ll find five reels in front of you, each of which is three symbols high. Spread across the reels you’ll find 20 different paylines, and these paylines are fixed, therefore meaning that you have to play all of them on every spin of the reels. This isn’t a problem though, as the vast majority of online slots players agree that having the maximum number of paylines active is the best way to play.

While you can’t change the number of paylines, you can alter the amount of money you bet per spin. The lowest that can be bet per spin is £0.20, meaning that all but the very lowest stakes players will be able to enjoy themselves, which the maximum bet you can make is a truly staggering £500 per spin – a sum that ensures even the biggest whales can have some fun playing this exciting online slot machine from Playtech. Changing the amount of money you bet is easy – just click the plus and minus buttons underneath the “Total Bet” display.

But how much cash can you win when you play this online slot? Well, the highest paying symbol during the base game is the orange fighter (called Master Chan) and getting five of him across a payline will lead to you winning a prize worth 2,500x your payline bet. So, those playing at the highest level could find themselves winning £62,500 when they play. This figure can increase thanks to the Collapsing Reels feature, which you might be familiar with from other online slot games. You can also win more during the free spins, thanks to the fact that multipliers can be added to your winning combinations.

The first bonus feature to mention is the simplest one – the wild symbol. This is represented on the reels by the victorious fighter and it can substitute for most other symbols on the reels, therefore meaning it can help you get some nice winning combinations. There is no multiplier attached to the wild symbol though, which some players might find slightly disappointing. The wild symbol only appears on reels two, three and four.

The next bonus feature to mention is called Collapsing Reels, and it is always active. You might have seen it before, but for those who haven’t, it works like this: when you get a winning combination, you will be paid as normal. The winning symbols will then disappear from the reels, and be replaced by new symbols. This could lead to another win! The feature will continue until another new win is not revealed on the reels.

There’s also a twist to the Collapsing Reels at Eliminators though, as while they’re collapsing, you’ll be attempting to beat the different fighters. When you get a winning combination of one of the fighters, the fighter in question will be eliminated, and all their symbols will be removed from the reels. If you can manage to defeat all the fighters, you will win a rather nice cash prize! This is a really enjoyable feature, and one that can bring excitement on any spin of the reels.

Finally, there are two free spins bonus rounds at this game, and you’ll get to choose which one you use after you’ve got three or more belts anywhere on the reels. You will have to choose between red games and blue games, and they both work in different ways…

Let’s start with the red spins first – the selection that has the higher volatility, meaning it offers you a better chance of winning big, but also offers a chance of you not winning much at all. This feature has Collapsing Reels, however they’re a little different. Why? Well, after every consecutive win, your multiplier will go up, and you can get up to a 10x multiplier when you play. The blue games take place on a different set of reels, and the symbols are arranged in a way that makes it more likely you’ll get winning combinations. This is a lower volatility game, so you should find that everyone wins a decent amount when they play.

Eliminators is a really exciting online slot with some really innovative features. Of these features, the best is the Collapsing Reels one, where you’ll be able to take on the other fighters and win big prizes if you defeat them all. The fact that this game is great shouldn’t come as too much of a surprise though, as it comes from the people over at Playtech, who have released a number of fantastic online slot machines in the past. So, why not see how good this game is for yourself by having a few spins today. 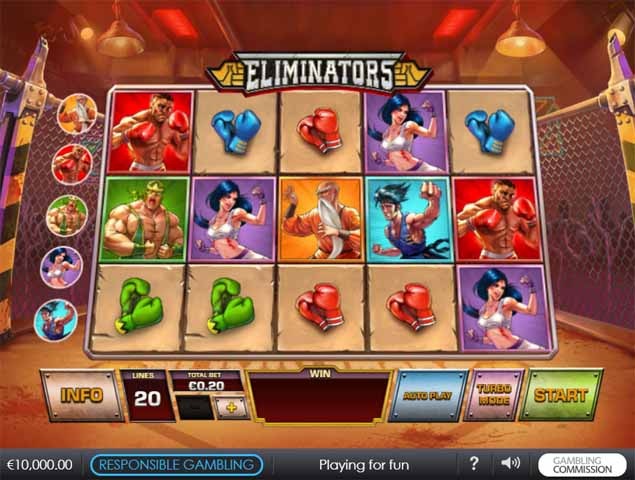 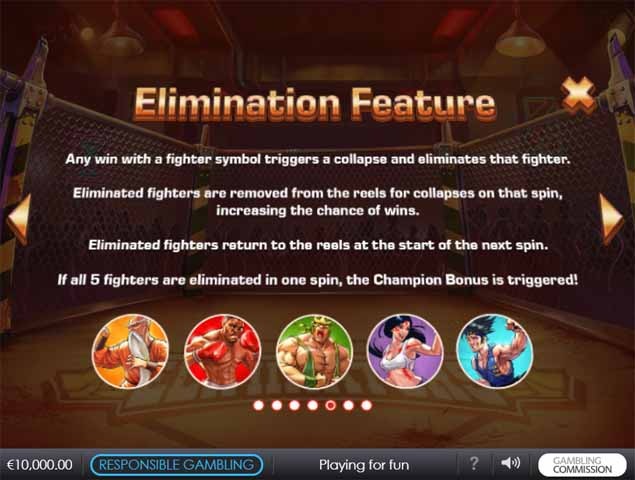