Emojis – they’re the latest fad in the technology world, found everywhere from texts between friends, through to business emails. Some people absolutely love them, and revel in placing a random aubergine in the middle of a message, while others can’t stand them, and turn their nose up as soon as they see a smiley face in front of them. Regardless of your opinion, there can be no doubting the fact that emojis are here to stay, and they have now been immortalised in slot form, thanks to the innovative people over at NetEnt. So, will this game leave you smiling, or is it more accurately described as a pile of poo? Keep on reading to find out…

This slot will be released in August 2017, and the release date has been timed deliberately, as it will follow the highly anticipated release of The Emoji Movie. This slot isn’t simply a rip-off of emojis though, as it has been created in conjunction with the official emoji manufacturers. The game will, of course, also be released for mobile casinos – after all, why wouldn’t they release this slot on the medium that has contributed most to the success of emojis?

This slot is very different to most other titles, as it doesn’t actually have any paylines. Instead, you’ll need to get clusters of symbols on the 6×5 set of reels. While getting these clusters of symbols leads to nice prizes, the biggest prizes come when you manage to collect enough of a specific symbol to start a feature – but more about these features later in this Emoji Planet online slot review.

As with most online slots, you can easily change the amount of money you bet per spin at Emoji Planet. This is done simply by clicking on the “Level” and “Coin Value” buttons at the bottom of the screen. Your overall bet will then be shown in the bottom left corner of the playing screen. The minimum bet amount is £0.20 per spin, while the most you can bet is a massive £200 per spin, ensuring that this game should really appeal to higher stakes players.

When it comes to the prizes, the most that can be won on a single fall of the symbols is 500x your stake, and this happens when you manage to get 30 smiley face symbols on the reels. The fact that this slot has an Avalanche feature means that you could win up to 5,000x your bet with just one bet though, meaning that the top prize, when playing at the highest stakes, is a massive £1,000,000. You can find out more about the Avalanche feature when you read through the next section.

If you like bonus features – and, of course, emojis – you should absolutely love playing this slot. Why? Because there are five different bonus features at this game, as well as the Avalanche feature. There is also a wild symbol, which can substitute for all other symbols to create winning combinations. The wild symbol is really easy to spot on the reels.

The Avalanche feature is the one you’ll see most, and it’s a concept that has been used by NetEnt before, most notably at their massively successful Gonzo’s Quest. It works like this: when you get a cluster of winning symbols, you’ll be paid, before the winning symbols then disappear from the reels. More symbols will then fall into place, giving you the chance to win again. The process will continue until no more winning clusters fall onto the reels.

The first of the bonuses is the Bomb feature, and this sees bombs placed randomly on the reels, which then explode giving you a cash prize. New symbols then fall into place, which could lead to yet another win.

Next up is the Pizza feature. A 3×3 pizza will be placed somewhere on the reels, and this will then transform into nine identical symbols. This means you’ll get a guaranteed win when this feature is activated.

Then there’s the Kiss Mark feature, and this sees kiss mark symbols placed on the reels, which then transform into wild symbols. These wild symbols can help you create some really nice winning combinations.

Next up is the Rocket feature. A rocket will fire vertically up one of the reels, and then some of the symbols on this reel will turn wild.
Finally, there’s the Two Hearts feature. No extra symbols are added to the reels, however you’ll receive a 2x multiplier on any wins.

Emoji Planet is a really innovative game from NetEnt, that doesn’t follow the standard rules usually used by online slots. This certainly isn’t a bad thing though, as innovations are what keeps the online slots world moving forward, and ensures that casino players always have something new and exciting to play. Whether you like emojis or not, you should still find that this game offers loads of fun on every spin, plus the prizes you could win are massive. So, why not spin the reels of this slot when it is released at one of our recommended online casinos? 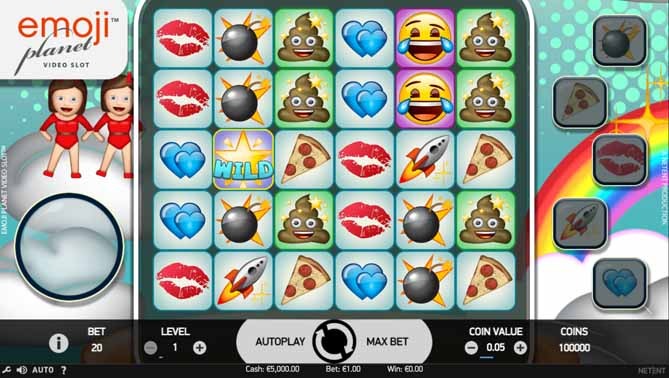 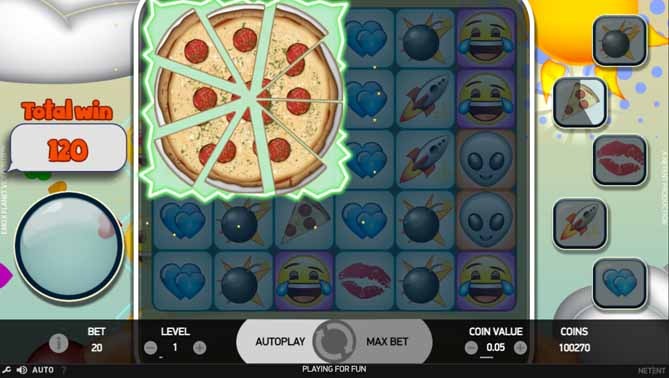 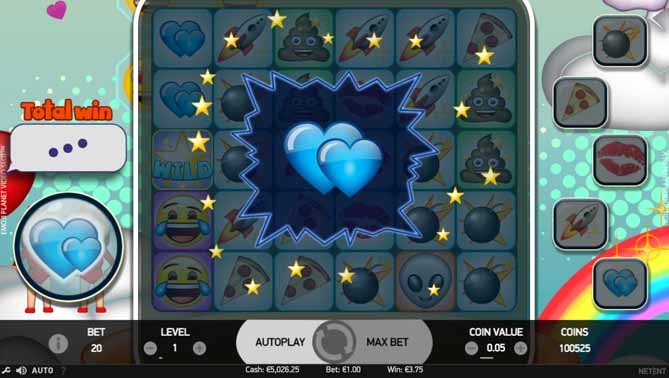