Ok admit it! We ALL use emoji’s! Why type countless characters when a small yellow character can sum up your feelings perfectly. The Emoji movie (released in 2017) won’t be remembered as a classic film, but such is the popularity of the emoji that they are an international language.Microgaming have jumped on the bandwagon with the emoji craze and produced a fantastic slot game which will hopefully evoke positive emotions for all players.

From the onset, visually EmotiCoins is colourful and benefits from an upbeat soundtrack which instantly engages the user. With a very cheeky feel, this fun game is based on emoticons which are used in text messaging and social media the world over. Now a language in its own right, symbols on the reels include regular playing cards and a huge variety of emoji’swhile the background shows a psychedelic blue colour. However, Microgaming have seemingly lacked a little imagination with their design and replicated some of their previous game structures within EmotiCoins.

EmotiCoins is a slot with five reels and three rows, culminating in 30 different ways to win spread your bets over these reels.The 30 pay lines available are fixed meaning they all have to be kept in play when placing your bets. The simplified approach from Microgaming enhances the playing experience and simplifies the game for the user. With 30 ways to win, the paylines are easy to work out – simply get three or more symbols on consecutive reels, and you’ll be counting your coins.

Microgaming are notoriously generous when it comes to pay outs and the EmotiCoins slot is no different. An impressive 3 hundred times your stake can be won on a single spin – an attractive proposition for all levels of player. EmotiCoins is a medium volatility online slot machine with an RTP of 96.5 and the max win is possible, especially in the free spins feature. The simple composition of the slot will attract younger and inexperienced players and with its two interesting features the game is perfect for new players, who want something exciting, but don’t want to risk losing all their cash in the blink of an eye.

The basic premise of EmotiCoins is very simple to pick up and with such a simplistic format the addition of bonus features adds an interesting new dimension to the slot.The Wild Blast feature is a lucrative bonus that can occur on any spin – up to five reel positions will turn ‘wild’ and provide you with a hefty guaranteed win – not bad considers it triggers randomly. The symbol itself is relatively unremarkable (a cartoon style, green-coloured WILD) but it’s sure to grab the attention of the player.

Players can trigger the free spins bonus feature by landing 3 or more of the ‘LOL’ scatter symbols simultaneously anywhere in view across the lines. Triggering this feature will award a generous 10 free spins – regardless the number of scatters that the player lands subsequently. Furthermore, there is no possibility of re-triggering this feature, or gaining extra spins once used. However, what makes the spins, worthwhile, is the Wild Stickers feature (tying in with the Wild Blast feature). This activates on the first free spin and adds 1 sticky ‘wild’ on the reels per spin. This ‘wild’ will remain in the same position, for the duration of the spin. Furthermore, during the 3rd, 5th, 7th and 9th spin an additional sticky wild will appear on screen meaning that during the last two spins of the bonus, there will be 5 sticky ‘wilds’ on screen – guaranteeing a decent win.

Like it or lump it – Emoji’s are a huge part of our everyday lives and there is a generation of Millennials who communicate through emoji’s rather than words – so kudos to MicroGaming for recognising emoji’s as an opportunity to develop a fun, engaging slot game. There is nothing cutting edge about the composition of the game which has a very similar feel to many of MicroGaming’s existing slots, the energy and vibrancy of the slot is very enticing. With an easy-to-use interface, effective bonus features and appropriate minimum and maximum betting stakes, EmoticCoins really is a slot for all ages and experiences. The bonus features are simple to understand and if used effectively, can provide very handsome pay outs – relative to the stake placed by the punter.
In need of some ecstatic emotions? Why not spin the reels of EmotiCoins now at one of our recommended Microgaming online casinos… 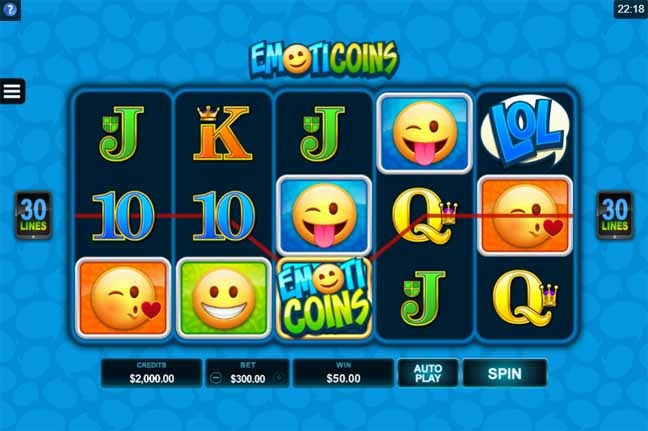 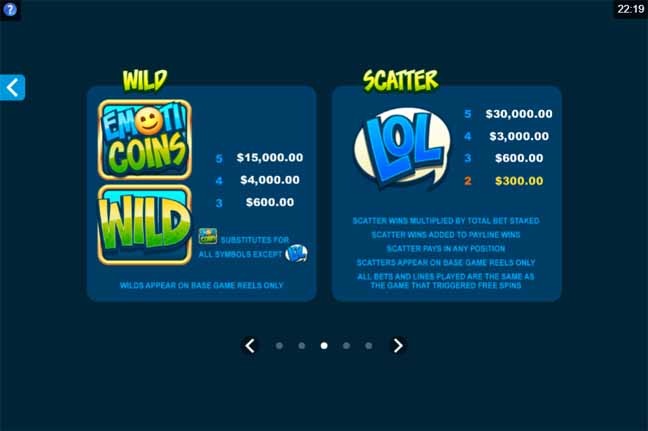