Emperor of the Sea

Slots based on China are hot in the online slots world at the moment, and this is simply because the Chinese market is seen as a huge target by online gambling companies. Even the biggest names in the industry are getting in on the act, which is why Microgaming have released Emperor of the Sea. From the music through to the graphics, everything about this slot goes back to Chinese roots – however it’s still a great slot for anyone to play, regardless of where they happen to live!

The graphics of this slot are clearly influenced by Chinese culture, with symbols including koi carp, dragons and junks. The reels are also set against the backdrop of a simple, yet beautiful, scene, and this enhances the enjoyment of playing this game. You can mute the audio at this slot if you want to however, when compared to most other slots, the music really isn’t that annoying.

The reels at Emperor of the Sea are slightly different to those found at most other slots. Why? Well, while most slots have reels containing three symbols, Emperor of the Sea has five reels containing four symbols each. This addition of extra symbols might be confusing for a few spins, but it really does add to the overall enjoyment of this slot from Microgaming. It also means that there’s room for 88 different paylines on the reels, meaning that there are plenty of chances to win every time you spin the reels. It is possible to alter the number of paylines to 38 or 68 as well, if you access the “Settings” tab of the slot, although playing the maximum number of paylines makes this slot more fun – plus, 88 is considered to be a lucky number in China!

It is also possible to alter the amount you bet per payline, although the process is slightly more complex than at most other slots. To change the amount you bet, you’ll again have to access the “Settings” tab, before then adjusting the bet to your preferred amount. Most other slots allow you to do this directly from the game’s main screen, and the method employed for this task by Emperor of the Sea is slightly annoying. That is the only real criticism that can be made when it comes to this online slot from Microgaming though.

But what about the prizes? After all, they are the main reason why most people play online slots, aren’t they? Well, as is the case with most slots from Microgaming, the prizes at Emperor of the Sea are pretty impressive, with the jackpot coming in at a hefty £1,650,000. This is much more than the vast majority of online slots out there, and it can be won when playing the free spins bonus feature. During both the base game and the free spins, the highest paying symbol is the Emperor of the Sea logo, which pays 525x your bet per payline. Other high paying symbols include the dragon and the green pot. The lowest paying symbols are, as usual, the 9-A symbols.

If you like your slots to have absolutely loads of features, then Emperor of the Sea might not be the best choice for you. If, like many, you prefer simpler slots though, then this slot might well be a great choice. This is because there are only two bonus features to be found at Emperor of the Sea – although both of them can lead to some really nice wins!

As with the vast majority of slots, one of these features is the wild symbol, and this is represented at this slot by the game’s logo – which is also the jackpot symbol. One thing that stands out when it comes to the wild symbol at this slot is the fact that it comes stacked. This means that when you see one on the reels, there’s a good chance you’ll see at least another one too – and this can lead to multiple winning combinations. There are no multipliers attached to the wilds at this online slot though.

The main bonus at this slot is the free spins bonus though, and this is activated when you get three or more of the gold bowl symbol on the reels. Because this is the game’s scatter symbol, you will also be awarded an instant cash prize when you get three or more of this symbol on the reels. When you activate this feature, you’ll receive eight free spins in total, and the free spins are really good, as they feature Rolling Reels and Growing Wilds.

Rolling Reels is a concept familiar to many online casino players. It essentially means that you can get multiple consecutive wins on the same spin, and this can lead to some massive prizes. Growing Wilds can also help you to win some significant amounts of money, as this feature sees the stacked wilds growing by one symbol after each free spin.

Emperor of the Sea might have a similar Chinese theme to many other online slots currently out there, but the fact that it is made by Microgaming almost ensures that it will become a hit with online slots players throughout the world. There aren’t too many bonus features, but that could be seen as a good thing by some players, and the graphics are really good. It’s the huge £1,650,000 jackpot that is the best aspect of this online slot though. 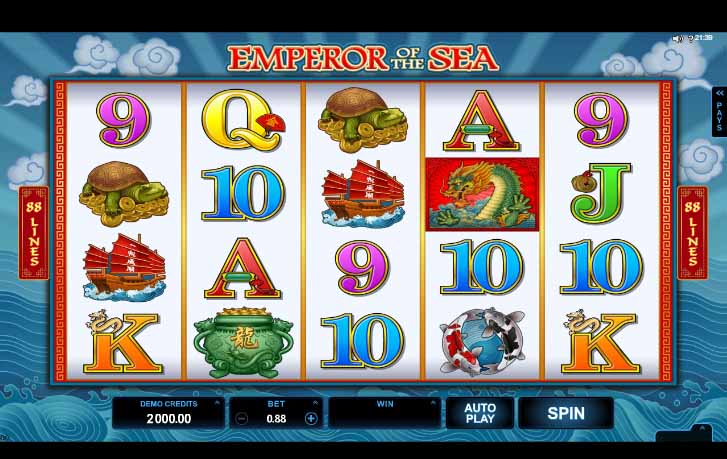 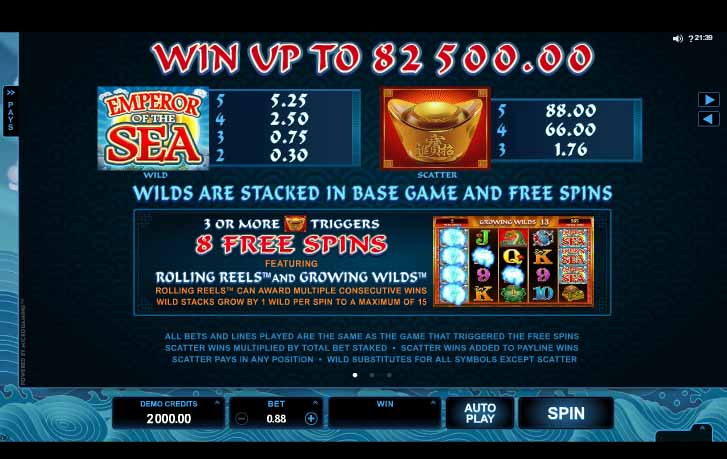