Epic Ape is yet another new game from the giants over at Playtech, and it has a jungle theme (although we’re not sure where the jungle is, as some of the creatures on the reels live thousands of miles from each other). It really is a mixed bag, meaning some will absolutely love the volatile action it brings, while others won’t be too impressed by the poor graphics and straightforward gameplay it offers. To see which camp you will fall into, why not take a read through the Epic Ape review found below?

First impressions of this slot aren’t too favourable, as it really doesn’t offer the kind of graphics found at most new slots nowadays – including many of those released by the people over at Playtech. Experienced players will know that looks aren’t everything though, so try to see past the unappealing aesthetics of this game and see if you can find any redeeming features. One plus-point is the fact that the music isn’t too annoying at this slot – something that is rare to find in the online casino world!

Epic Ape is a slot with six reels and four rows, therefore meaning it isn’t laid out like most other online slots out there. What’s more, there are 4,096 different ways to win at this slot machine, which is stunning! There are no actual paylines to watch out for – instead, getting symbols on consecutive reels, starting from the first, will lead to a prize being awarded. There’s no way to adjust the number of ways to win, so all 4,096 ways will be active on every spin of the reels. Why would you want to reduce the number anyway though?

While you can’t change the number of ways to win, you can alter the amount of money you bet on each spin of the reels. This isn’t a slot for low stakes gamblers though, as the minimum bet amount is £0.25 per spin, which is high when compared to most other slots. The most that can be wagered at this slot machine is £80 per spin, which isn’t that high, so Epic Ape is certainly a slot aimed at those looking to play at mid-level stakes. To adjust the amount you bet, just click the plus and minus arrows underneath the “Coin Value” section.

The final thing to look at in this section is the prizes, and the most you can win per payline is 300x your coin value. Therefore, the maximum prize per payline when playing at the highest bet level is just £600. Don’t let this put you off though, as £600 isn’t simply the maximum you can win. This is because it is more than possible to get multiple winning combinations on a single spin. What’s more, you can also add multipliers to your winning combinations during the free spins, which only makes the prizes bigger. You can find out about these free spins in the next section of this Epic Ape online slot review.

This slot isn’t too heavy when it comes to bonus features. In fact, there are only two special symbols to mention, and the first of these is the wild symbol. This is represented by the diamond and is found on all reels aside from the first. It is just a standard wild during the base game, meaning that it can substitute for most other symbols in order to help you create big winning combinations. You should see this symbol spinning into view quite regularly, and it will contribute heavily to the overall amount of money you manage to win.

The other important symbol at this slot is the Free Games symbol, and there are no prizes for guessing what you’ll get when three or more of these symbols appear on the reels! Yes, that’s right, you’ll receive free spins, and the number you get depends on how many symbols you used to trigger the feature. Three symbols will lead to eight spins, while four leads to 15. Five symbols will grant you 25 free spins, while getting six Free Spins symbols will lead to a massive 100 free spins. What’s more, you can win more free spins while the feature is active – just get two or more Free Spins symbols anywhere on the reels. There is no limit to the amount of times you can reactivate free spins at this slot.

The free spins work in a pretty simple way, which will please some, but might leave others searching for more excitement. The reels will spin as normal, and prizes will be added to your tally as you win them. If you get a wild symbol in a winning combination though, you’ll have a multiplier added to your win, and it’s possible to get up to a 5x multiplier when this happens.

It is important to say a couple more things about the free spins though, and the first is this: they can take an absolute age to activate. The second thing to say is that the free spins don’t always lead to great prizes, however they can also lead to some massive wins as well. This is because Epic Ape is a highly volatile slot, so you could win loads very quickly, but you could also lose loads quickly as well.

Epic Ape really is a mixed bag. If you like volatile slots with loads of paylines and some huge potential prizes, this Playtech slot could be perfect for you, however if you’re looking for something with great graphics and some features that are a little different from the norm, you’ll probably want to look elsewhere. If this slot sounds like something you’d enjoy playing, why not spin its reels today, at one of our recommended Playtech casinos. 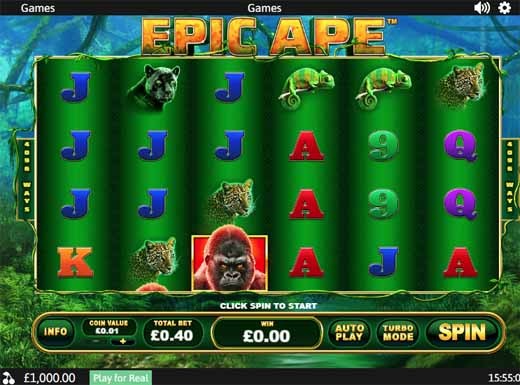 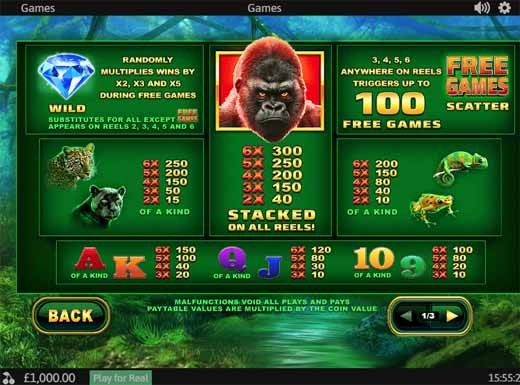