First things first: this slot does have a particularly ridiculous name. This isn’t new in the world of online slots though, and the slots with the strangest names can sometimes become true classics – slots that no player ever forgets once they’ve played. While Fa Fa Twins might not go down as one of these classics, it is still a really enjoyable slot to play, and offers a massive top prize, as you could win 810,000 coins on a single spin of the reels! Unlike most other slots from BetSoft though, this slot doesn’t offer a huge number of features, instead preferring to provide all the action in the base game.

The theme of this slot is a simple one, as it focuses on a pair of twins. The theme is clearly targeted towards the Chinese market – a market that is booming at the moment – however slots fans from everywhere will still really enjoy playing this game. The graphics and animations are exactly what you’d expect from a BetSoft slot, however the high-quality graphics do mean that only those with strong internet connections will get smooth gameplay.

Fa Fa Twins is a slot with five reels, and you’ll find a massive 243 different ways to win spread across these reels. This means that there aren’t really any paylines as such – instead, you simply have to get three or more matching symbols on consecutive paylines, starting from the first reel. You can’t alter the number of ways to win you have per spin, however it is possible to adjust your bet amount, as you’ll see in the next paragraph.

The minimum bet amount at this slot is £0.50, making this is a slot not really suitable for players looking for low stakes. Those wanting to play at higher stakes might not find what they’re looking for either, as the maximum bet is just £25 per spin. So, only mid-range players will definitely get the stakes they’re looking for when they play BetSoft’s Fa Fa Twins. Adjusting the bet amount is pretty simple – just change the coin size and bet level to increase or decrease your stake.

One of the main reasons for playing this slot is the prizes, as they can be absolutely massive. As already mentioned, the most you can win on a single spin of the reels is an impressive 810,000 coins. This is a higher jackpot than most other slots – including many progressive slots. The highest paying symbol at this slot is the twins symbol, while the cat and the koi carp are also high paying symbols at this game. As with many online slots, the 10-A symbols are the lowest paying symbols at Fa Fa Twins.

When a new slot from BetSoft is released, it’s generally the case that players anticipate a slot with loads of different bonus features. This is not the case with Fa Fa Twins though, as this slot only has a few different features to mention. Don’t get too concerned though, as all the features at Fa Fa Twins are really good, and enhance both the gameplay and the potential prizes!

The first feature to mention is the wild symbol, and this is represented by the Fa Fa Twins logo. It is only found on the second, third and fourth reels, however it can still be incredibly useful, substituting for other symbols and creating winning combinations. There are no multipliers attached to the wild symbols at this slot though, which some people might find slightly disappointing.

The next feature to mention is called Dual Reels, and you’ll be glad to know that this feature comes into play on every spin of the reels. The premise of this feature is a simple one: at the start of each spin, two adjacent reels will become identical. This could spread to more reels as well though, so it could be possible for all five reels to become identical. As you can probably imagine, this means that it’s possible to spin in some massive prizes thanks to the Dual Reels feature at Fa Fa Twins.

The final feature to mention is one that is commonly found at online slots, and it is the Gamble feature. Whenever you manage to spin in a win, you’ll need to decide whether you want to risk your prize. If you do decide to gamble and hit the Double Up button, you’ll need to guess whether the coin will land on heads or tails. Guess correctly and you’ll double the amount you’ve bet, but guess incorrectly and you’ll lose everything you’ve gambled.

Don’t think that the lack of loads of bonus features makes Fa Fa Twins a bad slot though, as this is far from the case. This is because the base game is extremely exciting, and there’s no need for anything else to enhance the experience! If you do want to find slots with more features though, you’ll find that plenty of them have been reviewed here on this site.

BetSoft always manage to make slots that look stunning, and this is certainly the case when it comes to Fa Fa Twins. It’s not all about looks with this slot though, as it also features some of the most exciting gameplay you’ll find at an online casino. The prizes at this slot certainly can’t be ignored either, especially the top prize of 810,000 coins. So, this slot really does offer pretty much everything an online slots fan could possibly ask for! 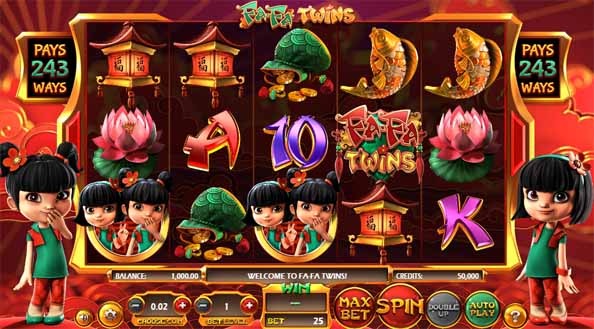 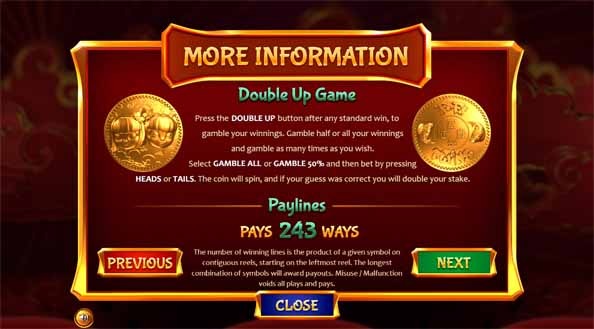 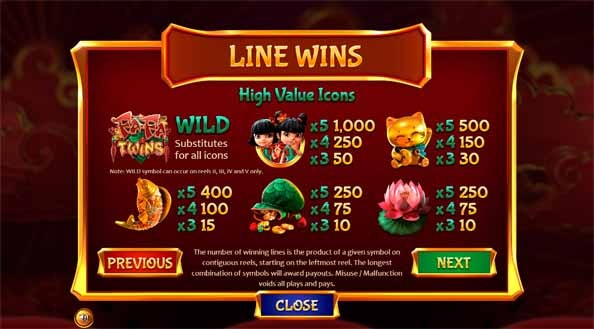