NetEnt have added a second title to their series of Fairytale Legends slots, and this time they’ve chosen to bring the story of Hansel & Gretel to life. Those who have played Fairytale Legends: Red Riding Hood will know that NetEnt can produce some absolutely stunning online slots, and this is definitely the case when it comes to their newest release, which offers amazing graphics, as well as immersive gameplay and the chance to win some seriously large sums of money.

The graphics at Fairytale Legends: Hansel & Gretel really are fantastic. Throughout the game, you’ll find the main protagonists standing to the sides of the reels, plus they’ll also be seen spinning around on the reels as well. The symbols all look really well created, however one complaint would be that some are slightly boring – it would have been better if NetEnt had created more unique symbols. This isn’t a big problem though, and won’t affect your enjoyment too much.

Hansel & Gretel is an online slot with five reels and 10 fixed paylines. You might think that only having 10 paylines is boring, but this slot has a fun feature – paylines don’t have to start on the first reel. Instead, winning combinations can start on any reel, providing they follow one of the paylines. This isn’t often seen at online slots, so should be a really novel new feature for many people playing this game.

When it comes to the amount of money it costs to play this game, you’ll almost certainly be able to find a stake level that suits you. The minimum bet per spin is just £0.10, while the maximum possible bet is a massive £200. To alter your stakes, you simply need to adjust the Level and Coin Value. The exact amount you are betting will be shown at the bottom of the screen.

But what about the prizes on offer at this slot from NetEnt? Well, as is nearly always the case with any slots from NetEnt, the jackpot at this game is pretty impressive, as it is 400x your bet per payline. This is just in the base game though – even more money can potentially be won when playing the bonus games. The highest paying symbol in the base game is the game’s logo, while Hansel and Gretel are also high-paying symbols.

If you’re looking for bonus features, you’ve chosen the right slot, as there are loads at Fairytale Legends: Hansel & Gretel. The first feature to mention is the stacked wilds, and these appear on the second and fourth reels during the base game. These can substitute for most other symbols, and create nice winning combinations. What’s more, if a stacked wild covers an entire reel, it will initiate a free respin. The initial stacked wild will remain in place for this respin, and stacked wilds will now also be found on the first and fifth reels. If another stacked wild spins into view on the respin, yet another respin is initiated.

There are then three random features. The first of these is the Fairy Wonder Spin, and this sees up to nine logo symbols appearing on the reels in a cluster for one spin. Then there’s the Fairy Surprise, which sees a symbol selected after the reels have spun, before other symbols then change into this symbol. The feature stops when a winning combination is made. Finally, there’s the Fairy Wild Spin, and this sees two full stacks of wild symbols appearing on reels one, two, four or five. Once the reels have been spun, you’ll then automatically get a free respin.

There are then two bonus games. When you manage to get three of the treasure chest symbols anywhere on reels one, three and five, you could then start one of the bonuses. The bonus you get is decided randomly. Instead of a bonus, you could instead be awarded a cash prize, which can be a large sum of money.

The first of the bonuses you could receive is the Candy House Bonus, and it starts with you choosing three of the 15 sweets on the screen, each of which has a multiplier attached to it. As you pick them, you won’t be shown the multipliers though. When you’ve finished picking, you can either take a multiplier worth the average of the three, or you can select just one of the multipliers. If you choose the latter option, you could reveal a huge multiplier, or you could end up with a low multiplier instead.

The other bonus is the Free Spins, and when this is activated, you’ll get 10 free spins. These are just standard free spins, meaning that they play in exactly the same way as the base game. Some might be disappointed that the free spins don’t have any special features attached to them, however they can lead to some really big wins.

If you’ve read through the entire Fairytale Legends: Hansel & Gretel review on this page, you’ll already have worked out that this slot offers a huge number of features, and this makes it a really enjoyable online slot to play. It’s not just the features that make this slot great though, as the prizes are also big, and the general look and feel of the slot is also fantastic. If you liked playing Fairytale Legends: Red Riding Hood, you should really enjoy playing this new addition to NetEnt’sFairytale Legends series. 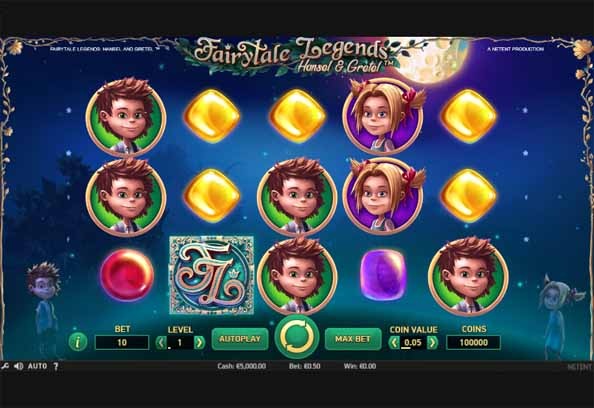 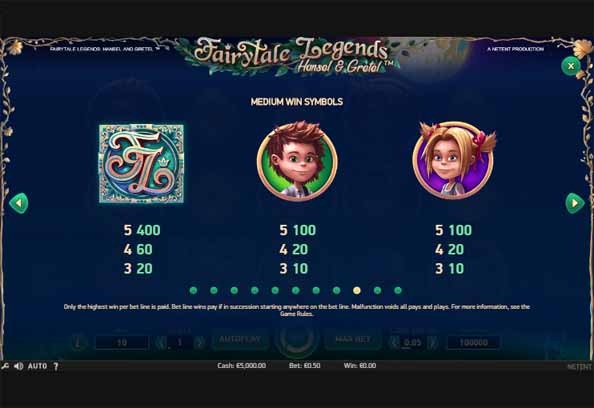