NetEnt have released some fantastic new online slots recently, and the tradition is continued when it comes to Fire Siege Fortress. This is an exciting title based on a medieval siege, and it’ll have you jumping for joy when you manage to spin in one of the massive jackpots on offer. What’s more, this game has really simple gameplay, as well as some fantastic bonus features, so what more could you possibly ask for? Take a look through this Fire Siege Fortress review today and see exactly why you should be playing this great new game from the people over at NetEnt!

The first thing you’ll notice about this online slot is the shape of the reels. There are five reels in total, and they’re shaped to resemble a castle’s ramparts. So, the first, third and fifth reels are four symbols high, while the second and fourth reels are three symbols high. These funny shaped reels make this game slightly different to most others. What’s more, you’ll find that there are 576 different ways to win at this online slot, so you’ll have a great chance of winning a prize every time you spin the reels.

Choosing how much you want to bet at this slot is really easy – just alter the “Level” and “Coin Value” fields to increase or decrease the amount of money you bet. The lowest possible bet is just £0.20, which is low enough to keep even the lowest stakes players happy, while the maximum possible bet is a pretty impressive £200. As with most online slots, the more money you bet, the more money you could find yourself winning.

But what are the prizes like at this online slot machine from NetEnt? Well, as you might expect, they are pretty impressive. The most you can win per payline is an amount worth 120x your bet amount, so those playing at the highest stakes could find themselves winning £24,000, which isn’t a bad amount. You could actually win even more than this though, as it’s more than possible to get multiple winning combinations on a single spin of the reels. The highest paying symbol is the purple dragon, while the lowest paying symbols are the 10-A ones, as you might expect.

Bonus features are an important part of most online slots, and this is certainly the case when it comes to Fire Siege Fortress. The first of them to mention is the wild symbol, and this is really easy to spot on the reels. These can substitute for most other symbols on the reels and create some nice winning combinations, so you’ll want to see them spinning into view as often as possible.

The main bonus feature at this online slot comes in the form of free spins, and they are started when you manage to get three scatter symbols appearing anywhere on reels one, three and five. You’ll get three free spins for each scatter landing on the reels, except when you get a scatter on the top position of reels one, three or five – in this case, you’ll receive six free spins instead. So, you could find yourself winning a massive 18 free spins if you’re lucky.

You could also activate Fire Free Spins at this slot, and this could happen when you get two scatter symbols on the reels, with a minimum of one of them appearing at the top of the reels. Alternatively, you could be awarded an instant cash win. If you get Fire Free Spins, you’ll get three in total, and you could win some nice sums of money.

Fire Siege Fortress is a seriously good online slot machine from NetEnt, offering absolutely everything you could possibly want from a slot. So, you’ll find great features and fun gameplay, plus you’ll also find that the prizes you could win can be absolutely massive. So, if you’re looking to play a new online slot today, why not head over to your favourite NetEnt casino and play Fire Siege Fortress. 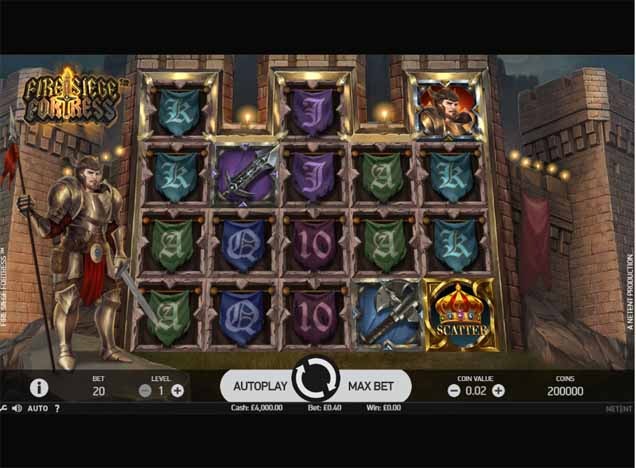 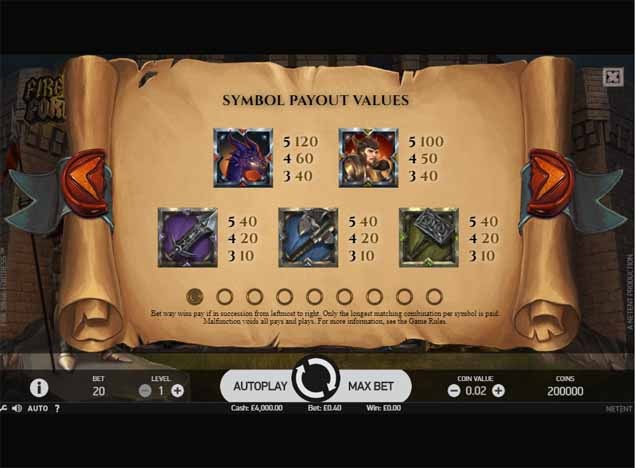