Inspired by the very popular Foxin’ Wins series arrives a festive game from creators NextGen, in the shape of Foxin’ Wins A Very Foxin’ Christmas. Here Foxin is back and this time he’s spreading a little Christmas jeer to the game that we all know and love – and at our favourite time of the year. NextGen seemed to have caught the same bug that every other software developer does in the weeks leading up to the big day, and they’ve pulled a cracker out of the hat here! Look forward to random cash prizes and exciting features as you play your way to big cash payouts that will surely get your heart racing. Don’t worry though if you’re not already in the Christmas spirit – because you definitely will be once you’ve played this slot. We’ve compiled this detailed review so you can take a look at what all the fuss is about!

Obviously you’re going to load the game up expecting a very Christmassy layout and you’re not going to be disappointed as Foxin’s beautiful home looks like it’s been given plenty of special attention for when Santa arrives. There’s a jolly soundtrack that plays in the background while you’re spinning the reels and symbols that are going to win you a lot of money include a wad of cash (fitting), Christmas trees, snow globes and sports cars that are driven by Foxin’ himself. It’s quite evident that there’s been a lot of time spent by NextGen in creating the animation, and don’t we appreciate it!

Foxin’ Wins A Very Foxin’ Christmas consists of 5 reels and 25 paylines that cannot be altered. This is the case with a lot of new games these days as software developers have cottoned on that gamers rarely will see the need in decreasing the paylines. Why would you want to do that when it will just damage your chances of winning? 25 paylines is also the perfect amount that will enable you to focus on the game instead of becoming worked up with the amount of ways you can win.

Players will be able to bet from as little as 0.25p or as much as £625 on each spin – although the maximum is slightly more on the SuperBet feature which we will discuss later on. NextGen have obviously thought about the need to cater for every player and it means that low-stake players won’t need to dig deep for the minimum amount and high-rollers will be more than happy at the prospect of spinning a huge £625. Changing your bet amount is easy and players can do so by using the arrows either side of the total coins.

But what can you win on this game? Well, the symbol that consists of Foxin’ driving the sports car delivers an incredible 1,000 coins if you land 5 on a payline. However, you need to really be looking out for the Christmas hat which acts as the Wild symbol and replaces all symbols barring the scatter. The hat is the most valuable symbol and can give you up to 80 times your stake for 5 across a payline. Also, try looking out for the pot of gold coins which acts as the scatter symbol. Land 3, 4 or 5 of these on a standard spin and you will 5, 15 or 100 times your original stake! This moves us nicely on to the bonus features…

This is the most exciting part of the review as it enables you to see what huge prizes can be won on this fantastic game. As we mentioned above, the scatter symbol is quite valuable and once you land at least three of these, it will then trigger the Free Spins feature. Here you will receive 10 free spins and all wins will be subjected to a 2x multiplier and if you land three more scatters, you will receive another 10 free spins. Foxin’ appears more frequently here which means you will also get more Wilds. A random bonus feature can also be triggered in the base game in which Fox Funds or Leprechaun Shakedown will occur, enabling you to receive a free prize.

Foxin’Wins fans will be well aware of what to expect here and they certainly won’t be disappointed! This is a fantastic Christmas game that really delivers in providing huge entertainment and great prizes. The SuperBet feature is an exciting addition to the game and – as most NextGen fans will be aware of – it’s the best opportunity to win a lot of money, especially if you’re playing on level 2. Make sure you play this slot if you want a light-hearted approach to Christmas this year. 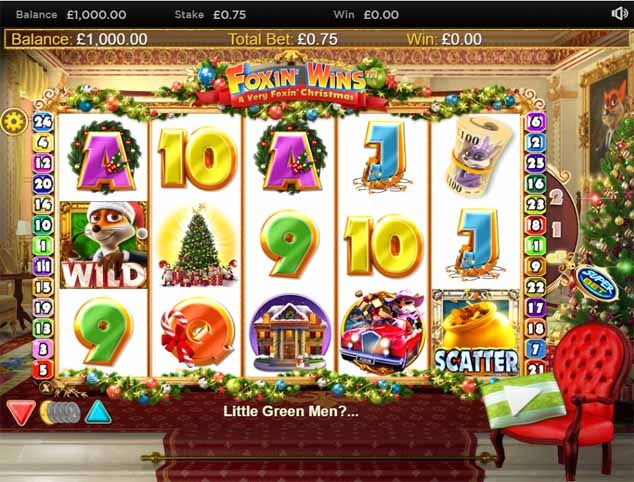 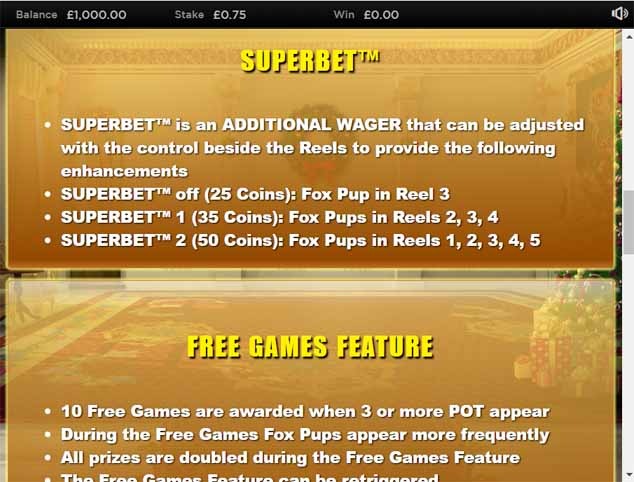