From Dusk Till Dawn

From Dusk Till Dawn is an incredibly popular movie. In fact, it often comes near the top when looking at cult classics. Those who have marvelled at Quentin Tarantino’s and Robert Rodriguez’s creation will be glad to know that it has now received a slot machine makeover, thanks to the people over at Novomatic. It offers loads of great features and some massive potential prizes, so why not find out more about this slot by reading through the From Dusk Till Dawn review below?

This slot is one with five reels, and each reel contains four symbols, therefore meaning that this slot is taller than most other slots out there. Across the reels you’ll find that there are 50 different paylines, and you can see how they are arranged by looking on the paytable. These paylines are fixed, so you’ll have to have them all active on every spin, but this shouldn’t be a problem for most online slots players. After all, why would you ever lower the number of active paylines anyway?

But how much money can you gamble when you play this Novomatic online slot machine? Well, you can alter your bet amount by clicking the plus and minus arrows underneath the reels, and the minimum you can bet is 50p, which equates to 1p per payline. This means that this slot isn’t necessarily going to be good for those looking to play at the lowest budgets. High rollers will be happy though, as the maximum bet is £10 per payline, which means that the highest possible overall bet is £500 per spin. Imagine if you hit the jackpot while betting the maximum!

On the reels, the highest paying symbol is Seth Gecko, who is played by George Clooney. Getting five of these symbols on a payline will lead to you winning 250x your bet per payline. The three other characters on the reels also lead to big payouts, and all payouts can be increased thanks to the Cash Explosion Bonus – but more on this further down the page! Character symbols can also take up to three spaces on the reels, meaning that there’s a good chance of spinning the higher paying symbols into view when you play.

If you like bonus features, you’ll be right at home playing Novomatic’s From Dusk Till Dawn online slot. The first to mention is the wild symbol, and this can come as a single symbol, or stacked on the reels. The wild symbol is just a standard one, therefore meaning that it can substitute for other symbols on the reels, and this should really help you to create a number of winning opportunities.

There are then three random bonus features, and the first is called the On the Run Bonus. This can activate after any base game spin, and it sees a car driving over the reels, dropping wild symbols as it goes. These means that you should manage to create some really nice winning combinations once this feature has finished!

Then there’s the Everybody Be Cool Bonus, which sees you get extra spins, during which all character symbols are turned into the Richie Gecko symbol. Finally, there’s the Cash Explosion Bonus, and this can happen after any win that’s higher than your overall bet. You could find a 25x multiplier being added to your winning, meaning that your prize could be massive.
The main bonus feature at this game starts when you manage to get three Bonus Twister Scatter symbols anywhere on the reels. When this happens, you’ll be taken to a wheel. This wheel has cash prizes on it, plus it also has a number of “Pick a Bonus” sections. The feature continues until you’ve won three cash prizes or landed on a “Pick a Bonus” section, which will prompt you to choose between two different bonus rounds.

The first bonus round you can choose is called the Dancing Bonus, and fans of the movie will be glad to hear that this is where Santanico Pandemonium makes her entrance. You’ll receive ten free games in total and these will take place on a new set of reels. Santanico Pandemonium acts as the wild symbol, and she can cover up to 12 symbols. What’s more, flames can engulf reels one and five, causing all positions to turn into the same symbol.

From Dusk Till Dawn really is a fantastic online slot, and Novomatic should be congratulated for making something so exciting. Even those who haven’t seen the movie before will enjoy playing this game, although true fans of the film will probably get most out of this game. If spinning the reels at From Dusk Till Dawn sounds like it would be fun for you, why not start playing the game at your favourite Novomatic online casino site today? 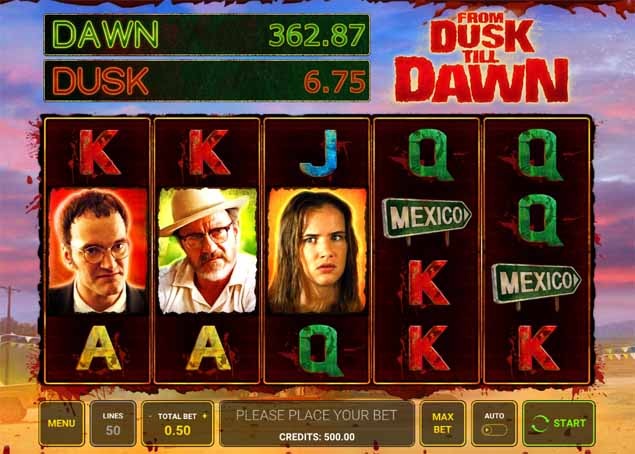 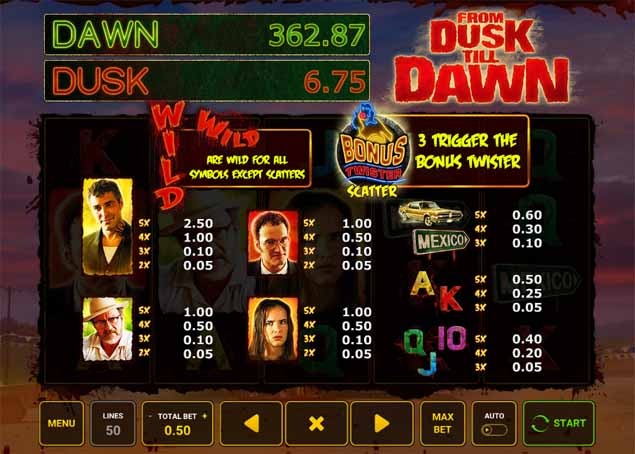