Almost everyone has heard of the famous luck of the Irish, and you’ll be able to see whether you share this good fortune when you play Gaelic Luck, the exciting online slot from the guys and girls over at Playtech. This slot looks visually superb and has some really exciting bonus features, however perhaps the most important thing to highlight is the jackpot, which is massive, especially for those playing at the highest stakes. So, why not grab your lucky four-leaved clover and spin the reels of this exciting slot from Playtech? You never know, you could win thousands and thousands of pounds when you do!

When you first load this slot, you’ll see that it is laid out in quite a simple and traditional manner. Three buxom beauties can be seen on the reels, which doesn’t exactly fit with the theme, and the reels are set against a plain green background. So, the graphics don’t exactly sound too exciting. The thing is this though: the simplistic layout of this slot is actually refreshing. So many slots nowadays are throwing everything but the kitchen sink at the graphics, and it’s nice to see that Playtech have decided to go down a subtler route.

This is a slot with five reels and 20 paylines. These paylines can be altered prior to any spin of the reels, so it is possible to have as little as one payline active. The question is this though: why would you want to reduce the number of paylines? After all, this will only serve to reduce your chances of winning. We’d recommend always playing with the maximum number of paylines, and to instead reduce your bet per payline if you need to lower the amount of money you’re gambling.

Reducing – or increasing – the amount you bet is really easy. Just click on the minus and plus signs below “Line Bet” and the amount you bet will change instantly. The least you can bet per payline at this online slot is just £0.01, while the maximum bet per payline is £1. This means that the largest overall bet you can make is £20, and this happens when you play at the maximum stakes, and have all the paylines active.

Perhaps the most important thing to look at in this section is the prizes though. After all, aren’t they the reason why most people choose to spin the reels of slots at online casinos? Well, the maximum prize per payline at this slot when playing the base game is a massive 10,000x your bet per payline, so those playing at the highest stakes could win an impressive £10,000 on just a single payline. This happens when you get five wild symbols lined up on an active payline. If you can activate the Lucky Lasses bonus, you could win an even larger sum of money, and you can find out about this bonus in the next section of this Gaelic Luck slot review.

So, the next things to talk about are the bonus features – an integral part of most online slots nowadays. You won’t find a massive number of bonuses when you play Gaelic Luck, however the ones you do find can be worth some seriously large sums of cash. The first of them to mention is the wild symbol, and this is represented on the reels by the pot of gold. As with most wild symbols, this can substitute for most other symbols on the reels, and can therefore help you to win some fantastic prizes. Don’t forget: the wild is also the jackpot symbol at this slot, which gives you another reason to hope it spins in on the reels!

There’s also a scatter symbol at this slot, represented by the Gaelic Luck logo. Scatter symbols are great, as they don’t need to be lined up on a payline in order to award a prize – instead, they can be anywhere on the reels. The minimum prize you can win from the scatters is 5x your bet per payline, while the maximum prize – which comes when five are found on the reels – is 50x your bet per payline. Unlike other scatter symbols though, there is no special feature to activate when a certain number spin into view. This is actually quite refreshing, as it means there’s also a bonus symbol, and the more special symbols on the reels, the more exciting the game generally is.

The Lucky Lasses Bonus is the main feature at this slot, and it starts whenever you get the horseshoe/clover symbol anywhere on reels one and five. You’ll then be presented with three rather attractive lasses, and you’ll need to pick one. Doing so will reveal your number of free spins. You then need to choose from three clovers, and this will reveal your multiplier. It’s possible to get a maximum of 20 free spins when you pick, and you could also get a massive 10x multiplier. It’s also possible to retrigger this feature, so you could end up with a total of 40 free spins!

Gaelic Luck doesn’t have the massive number of features found at other slots, and it also doesn’t have the snazzy graphics. It’s a refreshing breath of fresh air in the online slots world though, as it instead focuses on the two things that are more important than anything else: exciting gameplay and huge prizes. So, if you want the chance to win a jackpot worth thousands of pounds, why not spin the reels of Gaelic Luck at your favourite online casino? 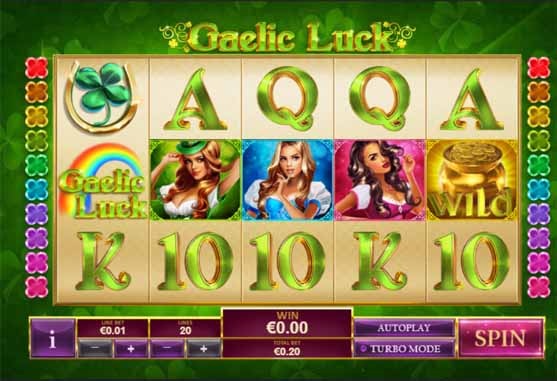 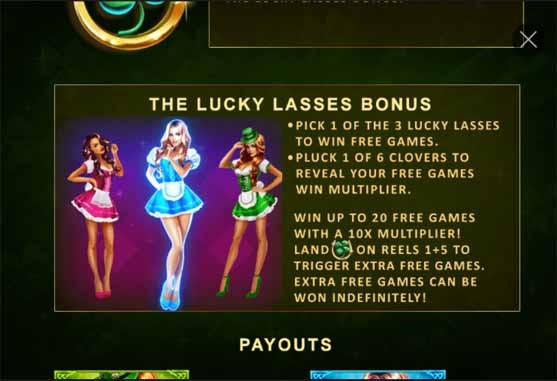