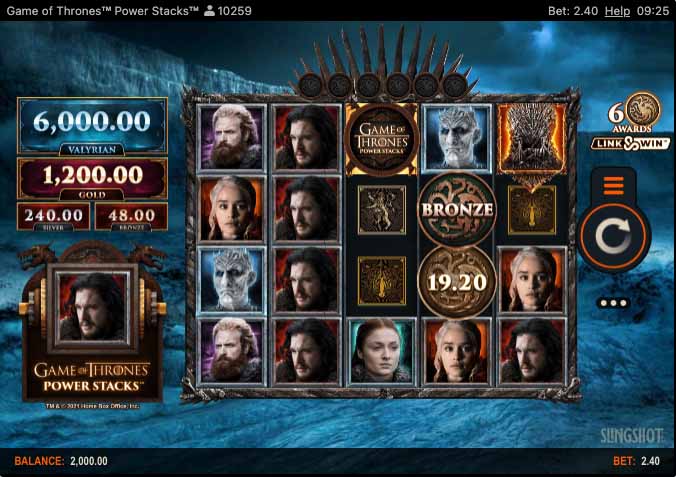 With the advent of winter, it is time to raise the swords and fight against the white walkers in the all-new video slot by Microgaming, Game Of Thrones Power Stacks. The branded video slot offers players with 5 exclusive reels and 4-rows to experience the best war-based slot game available on the internet. The fixed 40 paylines ensure players with several winning combinations.

With a motive to cater to different pockets and players, the betting value range from a minimum price of 20p to a maximum of £20 per spin. The payment is indicated in currency and not in coins for the players to understand the payout of each symbol.

For offering players with hands-free gaming experience, the Autoplay option comes with Auto spin between 10 and 100. To escalate the spinning movement, players can use the Turbo mode. The lightning bolt icon starts the turbo mode.

Game Of Thrones Power Stacks has an RTP of 96.2% and a hitting frequency of 29.63% that cumulatively helps players win an impressive win of 25000x the total stake.

The game’s graphical interface is not a mystery box for anyone, as it resembles the Game Of Thrones television series. Undoubtedly, the graphical and thematic setting of Game Of Thrones Power Stacks is more appealing than the original show. Moreover, the panoramic orchestral soundtrack act as the cherry on the top.

As soon as you run the game, you will see a wall as the backdrop of the slot arrangement. Various symbols that make up a complete gambling interface are:

Wild Symbol: What could be a better wild symbol than the Game Of Thrones Power Stacks logo. It can substitute all the other low-value symbols. However, it does not have any effect on the scatter symbol. It can cover all 5 reels of the video slot. The symbols have a payout scheme of 2.5x, 5x, and 10x the total stake when they appear in 3, 4, or 5 combinations.

Coin Symbols: These special symbols of the video slot help trigger the Link&Win feature. The symbols are available and multiply the stake value in both free spins and base games. Various coin symbols are Valyrian, Gold, Silver, Bronze.

Other symbols that players must consider to continue the winning spell are:

The relatively high-paying symbols are the characters of the show that include Tormund Giantsbane, Night King, Sansa Stark, Daenerys Targaryen, and Jon Snow is the highest value symbol of the game.

The high-octane slot lacks many bonus features. However, the four bonus features can offer players different winning opportunities and an opportunity to hit the jackpot prize.

Game of Thrones Power Stacks comes with a carousel located to the left of the reels. When players spin the reels using the spin option, the carousel feature also spins along with it. It spins to reveal a symbol that is called the revealed symbol, which appears in stacked formation. Any symbol, except the Wild and scatter symbols, can be selected for the stack formation.

The Link&Win feature works when 6 coin symbols land together on the reels. It offers players three free spins. The triggering coin symbols stay in their position, while the other symbols respin. If players win additional symbols, the respins again replenish to 3. The game ends with the end of respin or if the players win the Valyrian prize. The feature is played on an exclusive reel. The maximum win can reach as high as 15x the total stake in the base game and 30x in the free spin game.

When 3 or more scatter symbols land on the reel, 15 free spins are gifted to the players. 3, 4, and 5 scatter symbols reward players with a 1, 10, or 100x the total stake. Therefore, players can win 15 free spins with a 2x multiplier. Moreover, the wild symbol remains stack during the free spins round. Since they are the highest paying symbol, players stand a chance to win more. Additionally, they can trigger the Link&Win feature during the free spin round.

The Game Of Thrones Power Stacks slot is better than the original series in graphics and engagement. It features all the characters. Moreover, the grand payout amount is highly impressive. For the players looking for something attractive, the Link&Win feature is a new edition. Therefore, the video slot game of the medieval world is a must-play for slot lovers. 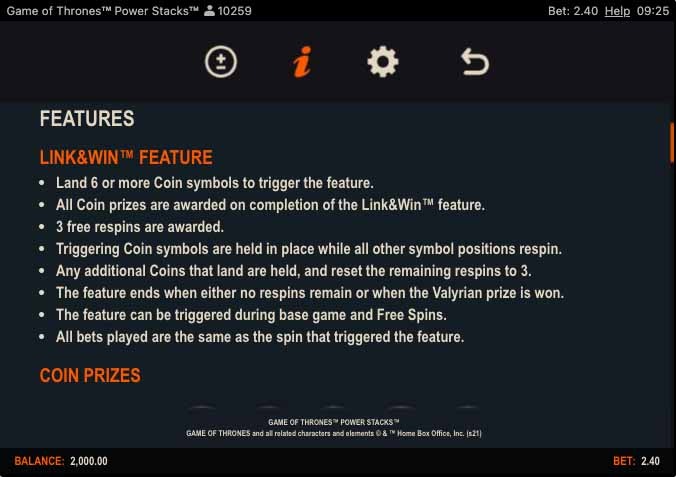 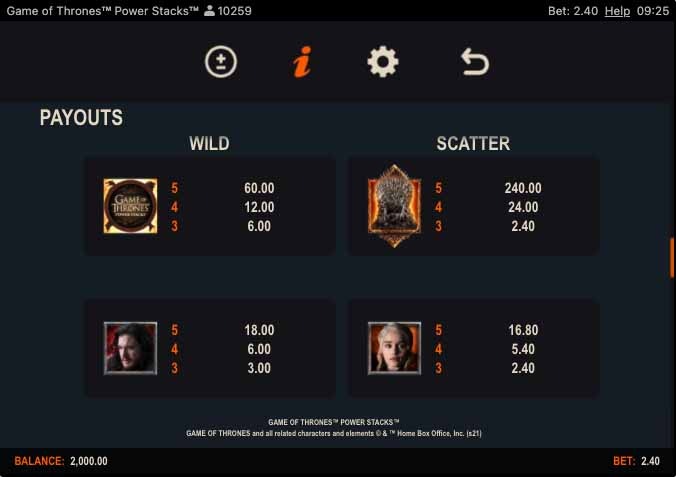