Fans of the original Ghostbusters movie can’t get enough of Ghostbusters Triple Slime, a popular new online slot machine game. Those familiar with the movie will see the main characters featured in the game and may even be transported back to the first time they saw it. The playing of the soundtrack during the game only enhances the experience.

The bright, eye catching graphics make it seem like the movie has come to life in the form of a slot machine/video game. The background of the game depicts a dark alley where ghosts could be lurking around any corner.

The reels are full of symbols from the movie, including the faces of Ray, Egon and Peter. The Ecto-Cooler car is also a symbol in the game, as well as the ectoplasm detector, Ecto goggles, the proton pack and the Keymaster helmet. The logo from the movie is used as the scatter symbol. The wild symbol is represented by the staypuff marshmallow man and may appear on the second, third and fourth reels on the game screen.

The Slimer Scatter Bonus feature is triggered when Slimer appears on the reels at least three times in one spin. When this happens all three scatter symbols morph into a game wheel. Each wheel awards players with a different value cash prize, depending on which reel the wheels are on.

There is also another feature called the Triple Slime Bonus. It is triggered by the appearance of at least three of the bonus symbol on the reels within a single spin. Players will see the ghosts and will see the wheel pointers they reveal. Each one points to a specific wheel, which will be green, red or purple. It is then the player’s job to pick ghosts depending on how many of the bonus symbol appeared on the reels. When players match the same color pointer three times they win a cash prize.

Ghostbusters Triple Slime is the second slot machine game based on the original movie – the first Ghostbusters slot was also a smash hit from IGT. It was released in land based casinos before being introduced online. From the soundtrack to the graphics and symbols, this game is what Ghostbusters fans have been praying for. Playing it is like stepping into the movie and fighting alongside the Ghostbusters, which has no doubt contributed to its popularity both online and offline. Even non-fans of the movie can enjoy this action packed video slot machine. 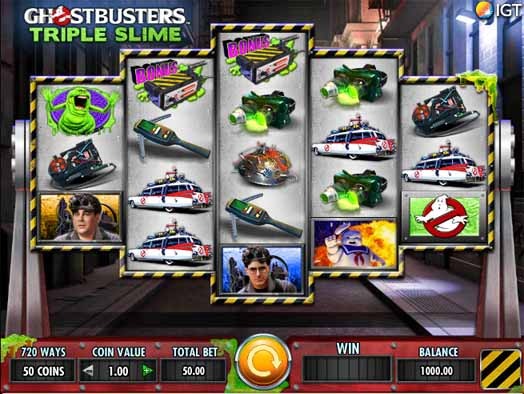 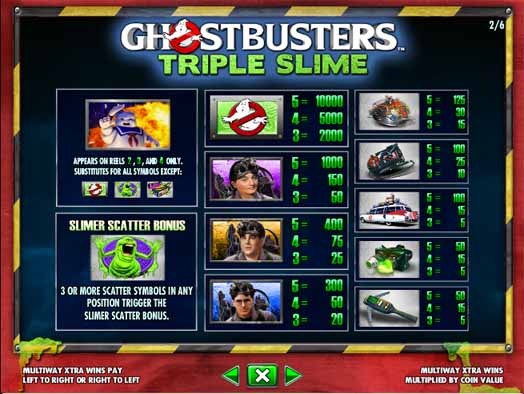