Fans of the Russell Crowe movie Gladiator are embracing the slot machine game of the same name. Footage is taken directly from the movie to give fans a real treat when they play the game. The symbols used in the game are taken from the movie as well, including the Gladiator helmet, which serves as the game’s wild symbol. The game’s scatter symbol is The Imperial Roman Eagle. The appearance of two or more of this symbol on the reels after a single spin pays out to lucky players.

The Gladiator helmet will only appear on the second, third and fourth reels on the screen. The appearance of the helmet on each of those reels after a single spin results in the Coliseum bonus round being triggered. When this happens players can choose a stone block from each row on the game screen.

There are four rows and the block players choose on each row determines factors of the bonus game such as the extra wild, extra scatter, multiplier and how many free games they win. When the free spins are re-triggered during the bonus players win nine times the amount of the bet they placed on the spin that resulted in the bonus.

Gladiator has become such a popular slot machine game at online casinos that a second version of the game was created featuring a progressive jackpot. However, the original version of the game is just as compelling as the newer version. Its entertainment value to fans of the movie is nothing short of impressive. Even those players who didn’t see the movie will enjoy the original version of the game with its high quality graphics and sound effects. The game is fast paced enough to prevent players from growing bored with it without being so fast paced that it is difficult to keep up with. 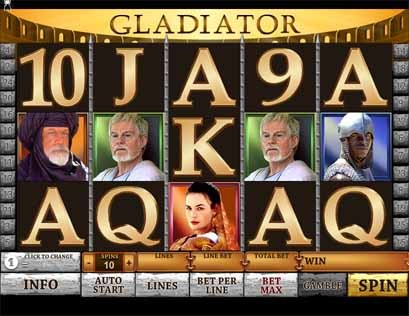 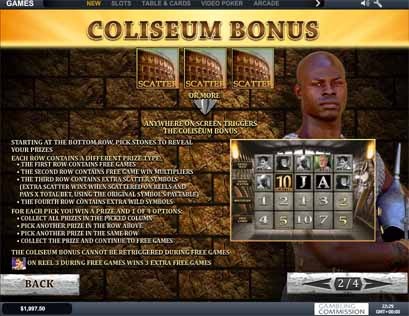 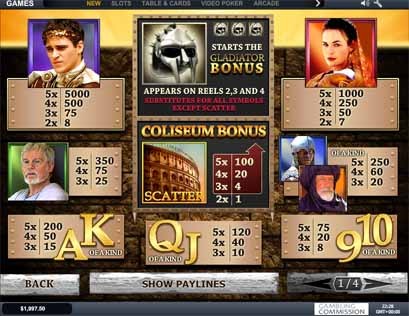