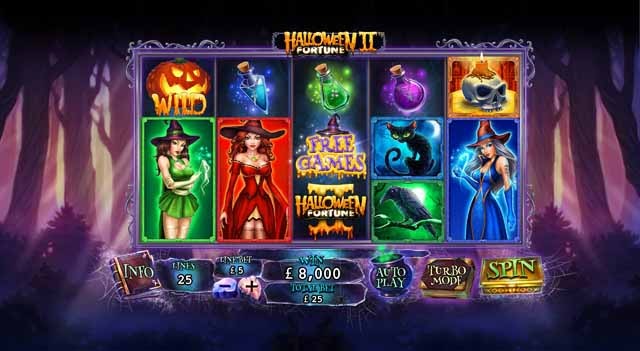 Just in time for Halloween, Playtech have released a new version of their popular game Halloween Fortune. Halloween Fortune 2 is more detailed and beautiful than the first version of the game, and will certainly appeal to Halloween lovers or fans of the first release, as the game as seriously been enhanced. It contains the same main characters though, as you will be reunited with the three witches and their black cat.

The game graphics of the new Halloween Fortune 2 are a lot nicer than the first one, as they have a nice glow effect on them. The game symbols are displayed on a greyish and purplish background where you’ll see trees, making you think that you are in a mythical forest. The pay lines are not identified on the left and right side of the reel when you first launch the game, however, they will appear when you win.

Halloween Fortune 2 is a slot with 25 fixed paylines spread across five reels. The game symbols include a skull with a candle on it, which pays the most, a black cat, a crow, a red witch, a blue witch and a green witch. The most basic symbols of this game are three flasks – a blue one, a green one and a purple one, which pays the least out of all the symbols. The Wild in this game is a big pumpkin, and the Scatter is the Halloween Fortune 2 logo. The minimum amount you can bet on this game is £0.01 per line and, like all PlayTech games, the max bet per line is defined by the casino based on their exposure.

The game is pretty straightforward at it contains one bonus feature, which is the 10 free spins. To trigger the free spins feature, you will need to hit 3 Scatters on the reel. The scatter symbols do not need to be on a particular payline, as three anywhere on the reels will launch the bonus feature. When you do trigger them, you’ll certainly appreciate the increasing multiplier per spins and the locked Wild in the centre reel.

Play at these online casinos