Halloween is regarded as one of the scariest movies of all time, meaning that it’s loved and loathed in equal measures by filmgoers! If you love this film, you’ll be excited to hear that Microgaming have just released a slot based on the movie, and it has everything you’d expect to find. So, are you brave enough to enter the chilling world of Halloween? If so, you should definitely read through the Halloween review below – a review that should prepare you for the shocks and surprises in store for you when you play this great online slot from the people over at Microgaming.

When you first start playing, you’ll immediately notice that this slot has a slightly sinister feel to it, which is appropriate considering it’s based on one of the most successful horror movies of all time! The reels all spin around over a backdrop of Michael Myers’ home – the home where his gruesome acts are often carried out – and you’ll find many familiar symbols on the reels, including ones representing main characters from the film. Even the music adds an edge to this slot, building the tension and creating the perfect atmosphere.

If you’re a fan of loads of paylines, you should be happy with this slot, as there are 50 of them in total spread across the reels, and these paylines are fixed. The reels are a slightly odd shape though, thanks to the Wandering Reels feature. This sees three reels expanded to feature four symbols apiece, and they also have giant symbols on them – but more on this later in this Halloween slot review.

Halloween isn’t a slot that will appeal to those looking to play for a couple of pence per spin though, as the minimum bet amount is a reasonably high £0.50. The maximum bet at this slot is £200, which should be more than enough to suit nearly everyone. Changing the amount you bet is simple: just click on the “Bet” tab and then adjust the sliders. All prizes are multiplied by your bet per payline, and not your total bet – you can work out your bet per payline by dividing your total bet by 50.

It’s also clearly very important to look at the prizes on offer at this slot, and they’re pretty good – but what more would you expect from a Microgaming online slot? Laurie is the most lucrative symbol on the reels, and getting five of this symbol across a payline will lead to a prize worth 500x your bet per payline. Loomis, Annie and Lynda are also high paying symbols at this slot. It is possible to get multiple wins across different paylines when you play though, mainly thanks to the inclusion of giant symbols on the reels.

The bonus features at Halloween are good, however Microgaming haven’t gone too over the top with them. The most obvious feature to mention is the Wandering Reels, and this is a really innovative new idea from Microgaming. Before every spin, three consecutive reels will be chosen and they’ll expand from being three symbols high to four symbols high. These reels then feature jumbo symbols of the four main characters, giving you the chance to make many high-value winning combinations.

As with most online slots, there is also a wild symbol at Halloween, and it’s pretty easy to spot on the reels. There’s absolutely nothing special about this wild symbol though, as it simply substitutes for most other symbols on the reels. It might not be the most exciting bonus feature at this slot, however it’s the one that will come into play most often.

There are two different bonus features at Halloween, however they are both triggered in exactly the same way: by getting three or more Bonus symbols anywhere on the reels. When this happens, you’ll be taken to a wheel, which you’ll need to spin. You’ll keep picking up prizes until you activate one of the two bonus features: Boogeyman Bonus or free spins.

The Boogeyman Bonus is a simple pick and click bonus. You’ll see a number of leaves in front of you, and you simply have to keep selecting them, winning prizes as you go. Every time you successfully pick a prize, your multiplier will also go up. If you can find all the hidden prizes, you’ll also receive a bonus prize, which is worth 20x your stake. The feature will end if you find Michael under one of the leaves – although he can be stopped by also revealing a knife.

The free spins are pretty standard ones, making them easy to understand, but also meaning that they don’t stand out from the free spins found at most other slots. You’ll access this feature if you select one of the four characters when you spin the wheel. The character used to start the game will then appear more prominently on the reels. You’ll receive nine free spins in total, and there is no way to win more free spins while the feature is active.

Halloween is a great slot for anyone looking to experience the thrills and frights of the movie, and the fact it’s from Microgaming means you can be sure it will be incredibly good. The bonus rounds are enjoyable and the theme really does stay true to the original movie, however it’s the prizes that really steal the show at this slot, as they can be worth thousands and thousands of pounds. You’ll find Halloween at all good Microgaming online casinos, so why not read our reviews and see which Microgaming casino is best for you? 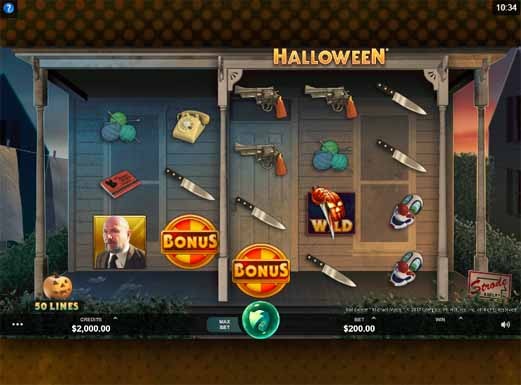 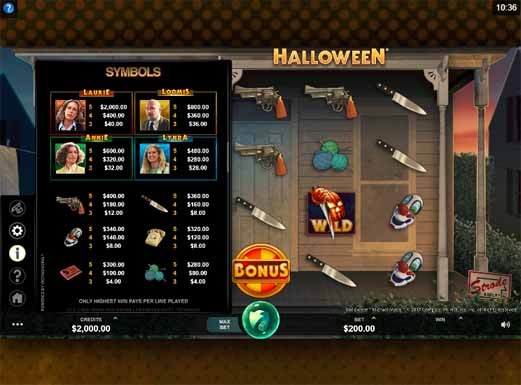